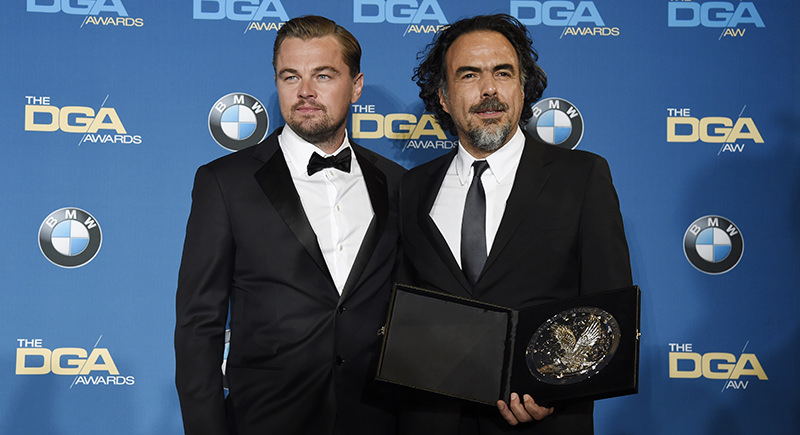 Leonardo DiCaprio, left, star of ,The Revenant,, poses backstage with the film's director Alejandro Gonzalez Inarritu at the 68th Directors Guild of America Awards (AP Photo)
by reuters
Feb 07, 2016 12:00 am
Hollywood's directors named Alejandro Inarritu the best film director of 2015 for "The Revenant" at a gala ceremony on Saturday, helping focus the race for the Oscars.

Past DGA feature film award winners have often gone on to claim the best director Oscar and see their films win best picture from the Academy of Motion Picture Arts and Sciences.

It was Inarritu's second consecutive DGA win after taking home the prize last year for "Birdman," for which he also won the best director Oscar. That film also took home the best picture Academy Award.

So far this year industry awards from the Screen Actors Guild, the Producers Guild and now the DGA have gone to different films, with actors choosing "Spotlight" and producers honoring "The Big Short."

The Oscars will be handed out in Hollywood on Feb. 28 in a star-studded television show viewed around the world which is one of the most-watched TV programs in the United States.

But Oscar buzz, which is typically the focus of Hollywood's awards season, has been overshadowed since January by claims of a lack of racial diversity in Academy Award voting after no actors of color were nominated in key acting and directing categories for a second straight year.

The controversy led to a revival of the #OscarsSoWhite hashtag on Twitter, as well as calls for an Oscar boycott by the likes of director Spike Lee and actress Jada Pinkett Smith.

Following its January nominations, the Academy unveiled changes to membership rules that are meant to bring greater diversity, but the cloud of racial bias in Hollywood has continued to dominate awards talk.

DGA president Paris Barclay noted the controversy in his opening remarks, saying the DGA had long championed "the important fight for equal opportunity."

In addition to film directors, the DGA also handed out television honors. Chris Addison won for best TV comedy direction for "Veep," while David Nutter won the award for TV drama series for "Game of Thrones."
Last Update: Feb 07, 2016 10:57 am