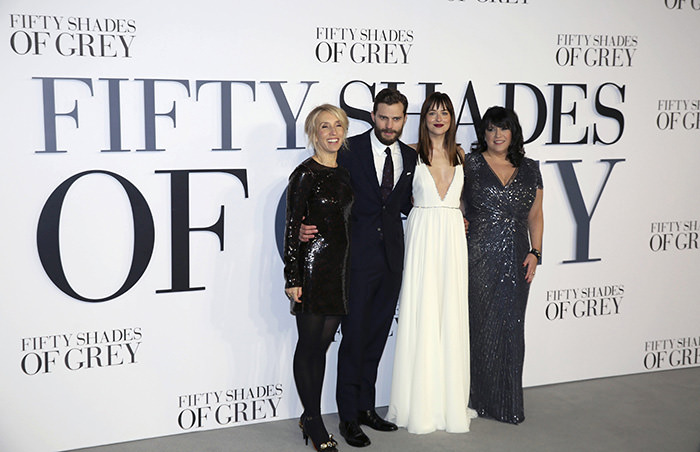 (L-R) Director of the film Sam Taylor-Johnson, cast members Jamie Dornan, Dakota Johnson and author E. L. James at the British premiere of the movie 'Fifty Shades of Grey', February 12, 2015 (Reuters Photo)
by Associated Press Mar 01, 2016 12:00 am
"Fifty Shades of Grey" came out on top or perhaps the bottom at this year's Razzies.

The awkward adaptation of author EL James' novel nabbed five prizes at Saturday's Golden Raspberry Awards, including tying it up with superhero flop "Fantastic Four" as the year's worst film.

"Fifty Shades of Grey" also "won" for worst screenplay, worst actor for Jamie Dornan and worst actress for Dakota Johnson, with the pair pinning down the worst screen combo award.

In addition to tying for worst film of the year, "Fantastic Four" was also lambasted as worst remake, rip-off or sequel and earned the worst director prize for Josh Trank.

Sylvester Stallone, who is nominated in the supporting actor category at the Oscars for reprising his role as Rocky Balboa in "Creed," was bestowed with the Razzies' redeemer award, which lauds past Razzies recipients for recent work that's revived their careers.

The winners of the 36th annual Razzies were announced Saturday at the Palace Theatre in downtown Los Angeles, across town from the Dolby Theater where the 88th annual Academy Awards will be presented Sunday.