Grieve, smash, dance: Gyllenhaal's 'Demolition' has it all 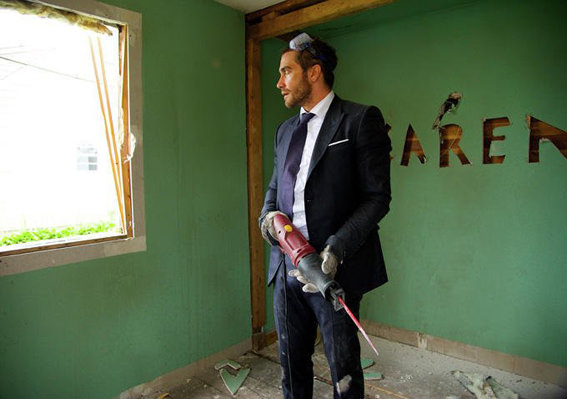 by Apr 05, 2016 12:00 am
In the movie "Demolition," actor Jake Gyllenhaal loses his wife in a traffic accident, pours his heart out to a vending machine company, and smashes up his home with a sledgehammer.

But perhaps the biggest challenge in the drama-comedy about grief was having to free-style dance through throngs of New York city commuters as his bereaved Wall Street banker character throws out society's expectations.

Gyllenhaal, 35, said the un-choreographed sequence, shot on a subway and on the streets of New York, was the scene that most terrified him. "I was really very nervous about that sequence. (Director) Jean-Marc Vallee said you're going to just dance around and I thought, 'Oh God, what is this going to be like?.' You have all those feelings of fear and embarrassment," he said.

"And then I was also nervous (that) it was going to be recorded, you know, for film, for a long time," he added. Given this was New York, Gyllenhaal needn't have worried. The commuters barely batted an eyelid. "You can't really survive in this city if you don't just keep your head down. The majority of them just took it for granted and let me do my thing," he said. "Demolition," out in U.S. movie theaters on Friday, is Gyllenhaal's third film in 12 months after playing a boxer who also loses his wife in "Southpaw," and an American mountaineer in disaster movie "Everest."

He plays Davis Mitchell, a man who has lived his life according to convention - good job, nice home, expensive clothes, loving wife - to such an extent that he has lost touch with who he really is.

"When tragedy strikes and he loses his wife, he doesn't even know how to feel... he is just numb. It takes him about three quarters of the movie to even unlock a little bit of a feeling," Gyllenhaal said.

Mitchell writes long letters to a vending machine company's complaints department, dismantles his refrigerator and desktop computer, and takes a sledgehammer and a bulldozer to his own home. No stuntmen were used in the demolition scenes and Gyllenhaal learned to operate the bulldozer himself. "There is something really expressive and emotive physically in tearing things apart. So yes, it was very cathartic in that way," the actor said. "Davis didn't all of a sudden have this huge epiphany. He just found what he is and his journey begins at the end of the movie."