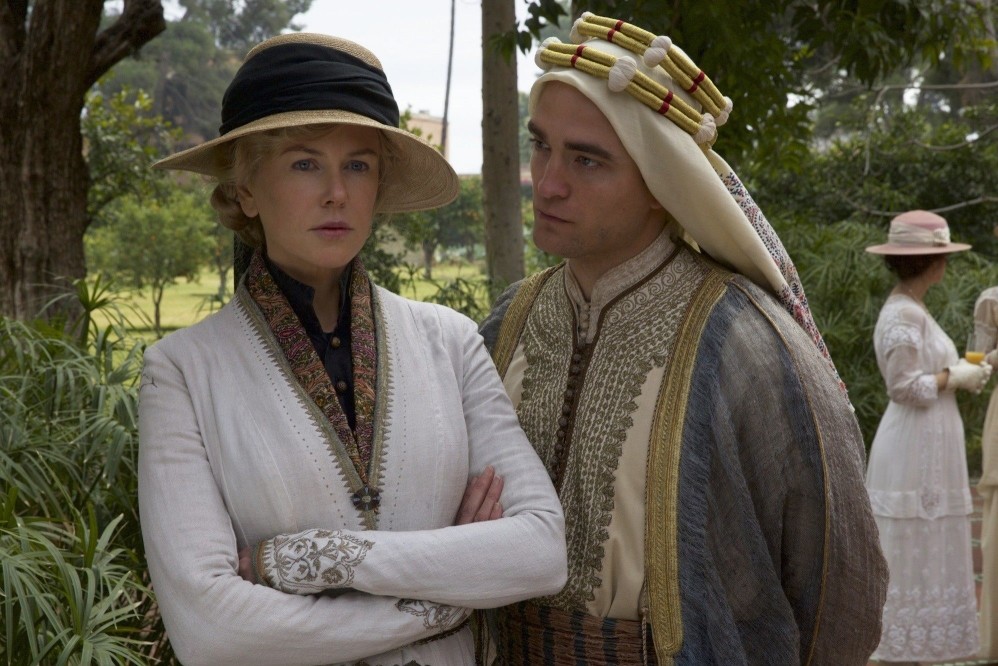 Werner Herzog's biopic of Gertrude Bell, 'Queen of the Desert,' has renewed interest in the British agent extraordinaire. Her role as oriental secretary, secretary of the Anti-Suffrage League and founder of the Baghdad Museum made her a force to be reckoned with during her lifetime and one whose influence endures

It is a truth universally acknowledged that the Ottoman Empire kept very good records. It is in these records that Gertrude Bell appears, as a British woman traveling across the Middle East, particularly in Anatolia. Bell is described as engaging in "hafriyat" - a term used to describe excavating at the time and for construction today - in Karaman, and there is record that she was robbed in Diyarbakır. She pops up in a conversation that Winston Churchill has with his aides, including Mark Sykes of the Sykes-Picot Agreement notoriety, when they are trying to redraw the map of the Middle East in the recent biopic "Queen of the Desert."

They refer to her as "the woman" who knows everything about the various tribes in the Levant and the Nejd, although Lawrence of Arabia, revered among Arabs for his extensive knowledge, is at the table as well. Bell also appears in Virginia Woolf's 1938 manifesto "Three Guineas," on how to stop war, the importance of having women in powerful positions, enabling them to make decisions and opening the professions up to women. Bell appears in "Three Guineas" not as someone we can learn from through her nation-building ventures in the Levant -nation-building processes that naturally involve more war than peace - but as a lady of the educated upper-class who is not allowed to travel in London without a chaperone. Bell is portrayed not as intrepid traveler but as yet another victim of the patriarchal limitations of the Victorian age.

Is it any wonder then, as Werner Herzog's film shows us, that she threw herself so wholeheartedly into traveling in deserts and spending her time in the company of male diplomats? That she could travel with relative ease in a region that is even today portrayed as inimical to women traveling alone must have had something to do with the fact that her movements were monitored closely by the Ottoman state - as the film also asserts. And that she introduced herself as a subject as well as property of the British Empire so that no Bedouin wanted her to be harmed within their own jurisdiction. Bell's book titled, "Amurath to Amurath" - a reference to a line in "Henry IV" in which Shakespeare mistransliterated "Murat," the name of the Ottoman sultan, whose court is described as the embodiment of tyranny - has a preface that addresses Lord Cromer, the governor of Egypt and a strong opponent of women's suffrage in England, as a sort of patron. Bell was also a staunch opponent of women's suffrage, and while she was happy to let women wallow in their limitations in the British Empire, she went off and explored the Levant. In the playing field of the Middle East, where Bell lived until the end of her days, their Bell and Cromer's interests converged as nodes of power that saw themselves well placed to determine the future of the region. And so, this British officer who thought women had no right to vote was going to bring freedom to the Arabs.

Bell stayed on in Iraq after the Middle East was divided up according to her liking, helped found the Baghdad museum and is now buried there. It sounds like she inherited King Faisal, son of the Sheriff of Mecca, to whom Lawrence of Arabia had promised a Greater Syria with Damascus as its capital. Seeing the tribes descend into chaos and the failure of the Paris talks, Lawrence abandoned his own Middle Eastern project and went back to England. It is quite a dark legacy, to think that certain British children today are haunted and attracted by Lawrence's vision of uniting the Levant, though under a much different banner.

It must have been partly Bell's genuine interest in antiquities that made her stay in Iraq. Although the biopic makes almost no reference to her interest in historical artifacts, Bell's texts, both "Amurath and Amurath" and "The Desert and the Sown" are full of descriptions of the Greek, Roman, Crusader and Mameluk ruins and photographs of columns, arches, courtyards, and even pottery from Raqqa. These elements are nearly completely absent from Lawrence's account of the war: He is occupied solely with warring tactics. Bell seems to have started her mission for the Baghdad Museum very early on. Her travel routes are geared toward passing locations of historical interests just as much as finding out about the warring capacities and dynasties of the Bedouin tribes. More often than not, the map she consults has been drawn by the Germans, and on occasion, by the Americans. It seems to be a running joke that, wherever she goes, the Germans have been there first. Americans also keep haunting Bell's travels, sometimes by their presence but more often by their accents. She keeps running into Syrians, most of them Christian, who have spent years in the United States trying to make their fortune. That so many Syrians have been to the U.S. and back at the start of the 20th Century is quite a revelation and makes one realize, once again, that humanity has been making perilous passages for better living standards longer than we care to admit.

Bell seems to have captured the imagination of her period even though we hear much less about her today than we do of Lawrence of Arabia. In The New York Times headline that was published on Feb. 7, 1926, "Two Women Contend for a New Eden in the East," she shares the honors with Halide Edib, a novelist and military officer of Turkey's War of Independence. They are both portrayed as women who serve as midwives to new nation-states. Halide is described as a feminist, Bell is said to be "intolerant of women as they are jealous of her." Herzog's film depicts her as irresistible to nearly every man she encounters: She steals a man that her cousin has set her heart on; makes a married man seek death in battle because he cannot face up to leaving his suicidal wife; she even turns down the offer of marriage of a teenage Arab sheikh quoting a hadith - one I'd never heard of- that forbids a man take another man's wife.

Naturally, none of this is present in her books in which she catalogs the historical heritage of the Levant. Bell's title for her book documenting her travels in Palestine and Syria, "The Desert and the Sown," makes a very Khaldunian reference to the different characteristics of the desert-roaming Bedouin and the settled Arabs. In this book, she is sometimes traveling in territories she has visited before and observes how she sees more and more nomadic tribes settling and sowing the land, more often than not in the vicinity of some Greek, Roman or crusader ruins: "When I passed by Kastal five years earlier, it was uninhabited and the land around it uncultivated. But a few families ... had established themselves now under the broken vaults and the young corn was springing in the levels below the walls, circumstances that should no doubt warm the heart of the lover of humanity, but which will send a cold chill through the breast of the archaeologist ... I noted another sign of encroaching civilization in the shape of two half-starved soldiers."

This is a passage that distills Bell's sympathies and tactics; ostensibly, she is an archaeologist who is interested in the civilizations that lived in the Levant and of which Europe likes to claim as its own heritage. Note, however, that she did not take a detour to Palmyra on this occasion. She is quite open about the fact that she sees the encroaching farmers as a scar on the landscape. Her assessment of Turkish forces is downplayed as an afterthought to her appraisal of the situation. While she is listing all of the things that Europe should at some time in the future lay claim to, Bell is also engaged in a reconnaissance mission of the Turkish and Arab forces. In "Queen of the Desert," the much maligned Nicole Kidman does a very good job of portraying the character of Bell who gets military numbers out of men in a very discreet manner.

Servant of the empire

Even though Herzog seeks our sympathy in the film by placing Bell at odds with British officials as she says that she does not work for the British crown but for herself, he portrays Bell as sharing the intelligence she gathered with the British authorities, becoming oriental secretary and, in effect, telling London which Bedouin tribe to support as leaders of Arab nations. She favors the Hashemites, who are foreign to Iraq, as a recompense for their efforts to weaken and dissolve the Ottoman Empire; thus, ensuring sectarian and tribal violence for years to come with, it seems, little regard for the future of the Roman ruins she loved so much.

She comes to realize later, in her letters, that borders make little sense to Bedouins, and that, even though she disliked a settled Arab polity, the ploughshare that she called an "obliterator" of antiquities would be the building block of nation-states, which Britain thought fitting for this part of the world. British Conservative Party deputy Rory Stewart, who also toyed with the role as governor in Iraq - as any able-bodied subject of the United Kingdom does - during the country's latest invasion, wrote in a 2007 article for the New York Review of Books that Bell's political fallacies warn us not to perceive figures like her "as romantic originals but as conscious servants of an imperial tradition." This warning was hardly necessary for a Turkish audience, who, in turn, need to stop seeing figures like Lawrence of Arabia and Bell as mere agitators and agents, instead taking a closer look at the texts they have written to gain a different perspective on the tribal and ethnic makeup of the Ottoman Empire just before it collapsed.