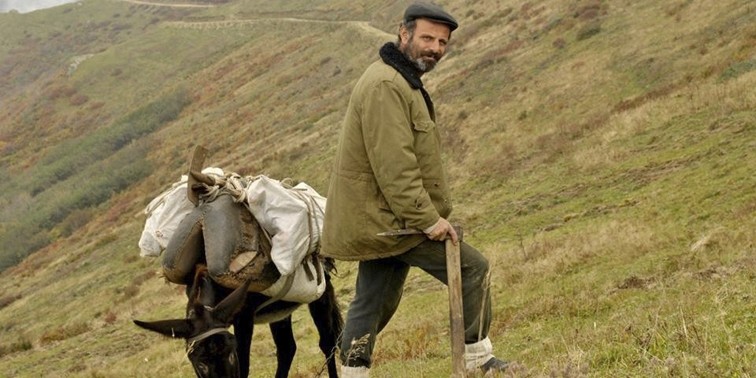 by Anadolu Agency Sep 08, 2016 12:00 am
The award-winning film "Kalandar Soğuğu" (Cold of Kalandar) is to open in Turkish theaters on Sept. 16. Speaking at a press conference held at the Trabzon Journalists' Association with the film's producer Nermin Aytekin and actor Haydar Şişman, director Mustafa Kara said the film, which has won several awards at film festivals including the International Tokyo Film Festival, is the story of a family who lives in a mountain village near the Black Sea where they try to hold on to life.

Noting that he is a native of the Black Sea Region, Kara said: "We worked hard to create a story that can depict the lives of those living in the region as well as its atmosphere and the story. We wanted to portray the drama of the story while also capturing the natural environment of the Black Sea region, which is not something typically covered in Turkish film. Therefore we chased this ambition and shot the film during four seasons."

Kara emphasized that realizing their plan was an arduous task, noting that the crew completed the film by traveling to Trabzon during each season from 2012 to 2014.

The film director also said the film was shot in several mountain villages of Trabzon and Maçka across flatlands, meadows, urban areas and Artvin. "Making a distinction among the fields of labor cinema, popular cinema, comedy or art cinema, our film chases a narration that depicts the ancient story of humans rather than just entertainment. Our film was awarded the Best Director award and the award for Best Film at one of the world's most prestigious film festivals, the Tokyo Film Festival." Saying that this is the film's first world premiere, the director emphasized that the application process for selection in these festivals is very difficult. "Cold of Kalandar" won the Special Jury Award at Premier Plans D'angers in France and later won the award for Best Actor, Best Actress, Best Music and Special Jury Awards at the Antalya Film Festival, followed by Best Director, Best Actor, Best Cinematographer and Best Fiction awards at the Istanbul Film Festival, and Best Director at the Red Tulip Film Festival in the Netherlands.Kara said "Cold of Kalandar" is a widely spoken film amid professionals from the international art sector.

Aytekin said they started the film's pre-production in 2010 and later developed the project. "We started with Istanbul Film Festival's 'Meetings on the Bridge: Film Project Development Workshop.' Later, we received scenario writing and production support from the Tourism and Culture Ministry, followed by European cinema funding since this is a Hungarian-Turkish joint production and includes one associate producer from Hungary," Aytekin said. "We started shooting the film as a TRT joint production. Shooting took a long time since the film was shot over four seasons."

Aytekin stressed that "Cold of Kalandar" was beautifully filmed and for this reason has found a very important place in the world of art.

The film's leading actor Şişman said there is a view out there that suggests a quality film cannot be shot in Trabzon, but "Cold of Kalandar" shattered this notion.
Last Update: Sep 08, 2016 1:00 am
RELATED TOPICS