The 'childhood of a leader,' birth of 20th century Europe 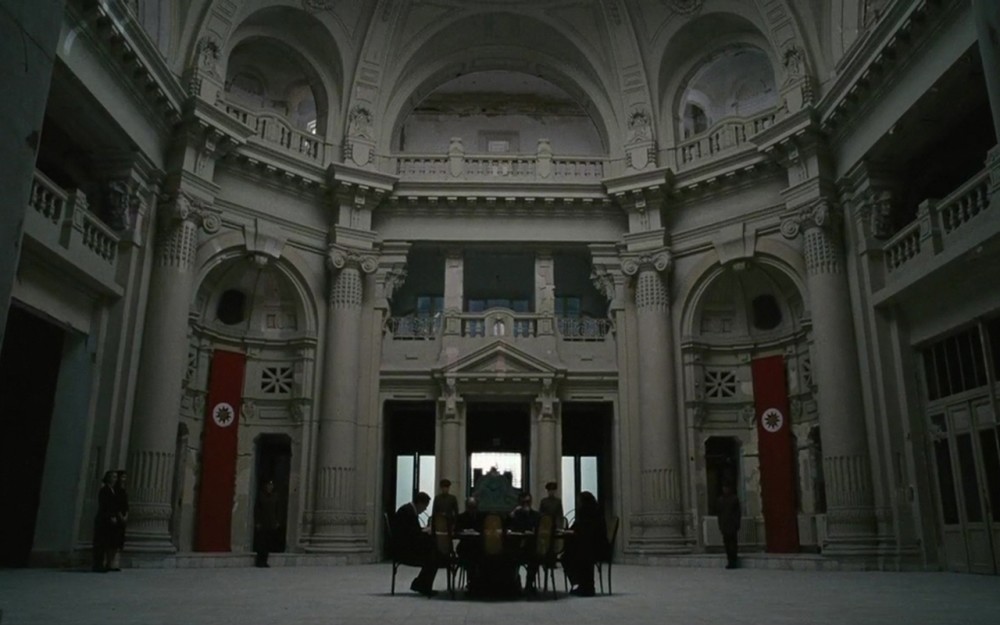 The film, which is a historical drama based on fiction and directed by Brady Corbet, focuses on the story of a child who lives in the post-World War I era, which leads him to develop a character of a fascist dictator.
by Nagihan Haliloğlu Oct 04, 2016 12:00 am

In his directing debut "Childhood of a Leader" Brady Corbet tells the story of a family drama in the midst of the Versailles meetings that resulted in the redrawn map of post-World War I Europe. It suggests that the seeds of the next war were already sown in Versailles, and invites parallels with today's failing peace talks

"The Childhood of a Leader" starts with what sounds like an orchestra tuning their instruments as the opening credits roll against a black background. Then the word "Overture" appears, as we prepare ourselves for the revelation of the setting for the childhood of the leader who is at the center of the story. After the Overture is done, the film is divided into First, Second and Third Tantrums instead of movements. Starting from its operatic beginnings, the film never falters in its sense of grandeur and symbolism, thanks to Scott Walker whose disturbing score carries the film to its fateful end. 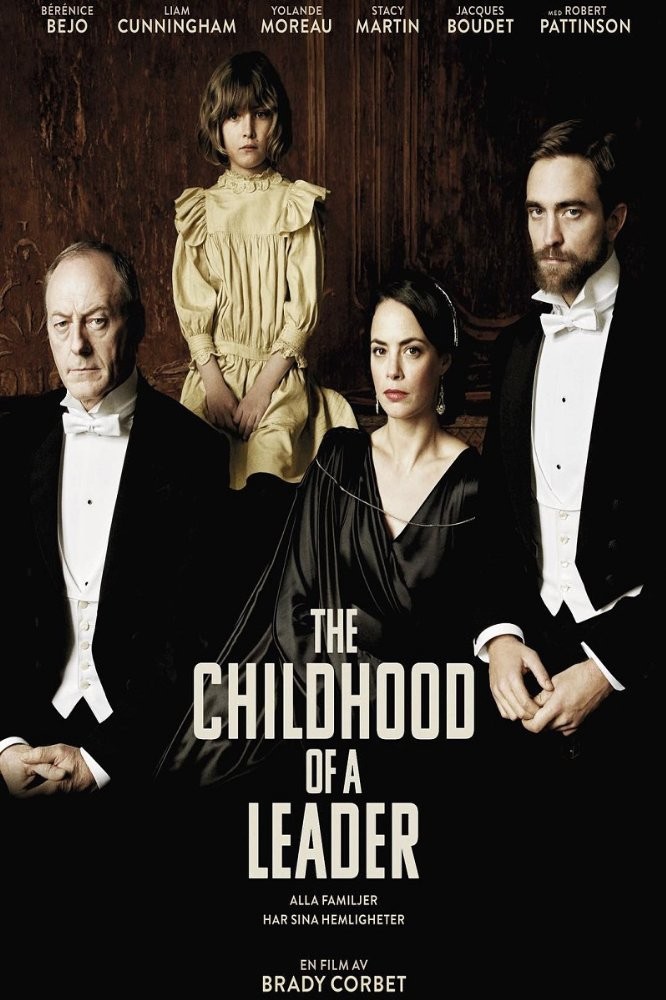 The first images we see on the screen are real black and white footage of the ravages of World War I, both on the battlefield and in villages. These are followed by footage of Paris welcoming the peace and the peacemakers, among who is the U.S. President of the time, Woodrow Wilson who seems to have a prime place. The Americans come to Europe to bring peace, and we follow the story of the child of one of these American peacemakers. Having been born in the U.S., the boy Prescott has escaped the trials of war, but as we shall soon find out, he has had to put up with another kind of possibly more searing violence, and we, the audience, watch how this affects his behavior. As the director Corbet cuts from the black and white footage to a scene of children making their way to perform a nativity play in a church, the tense string music does not let up one instant and we see this boy dressed as an angel turn devilish and attack his co-players.

We never get to learn the name of the father or the mother and this makes them seem more symbolic and larger than life. The music, different tones of darkness and shadow are important characters in the film, sidelining the sparse dialogue. But when the dialogue comes, it is incisive as it is economical. Robert Pattison gives a superbly understated performance as the journalist who visits the family in the French mansion they are renting for the duration of the Versailles conference in the countryside. Though it can be a bit annoying that Pattison is at times barely audible in this scene, his oblique references to addiction and loss shine all the more as does the way he asks about the American diplomat's wife, which, in its subtleness, suggests a rather clandestine relationship between them. When the unhappy wife appears in the hall at last, the glances they exchange and the awkward way they kiss goodbye tells us the tale. The audience is given further, hard evidence of this illicit relationship at the end of the film by Pattison, purely by the way he holds his body and looks out of a car. 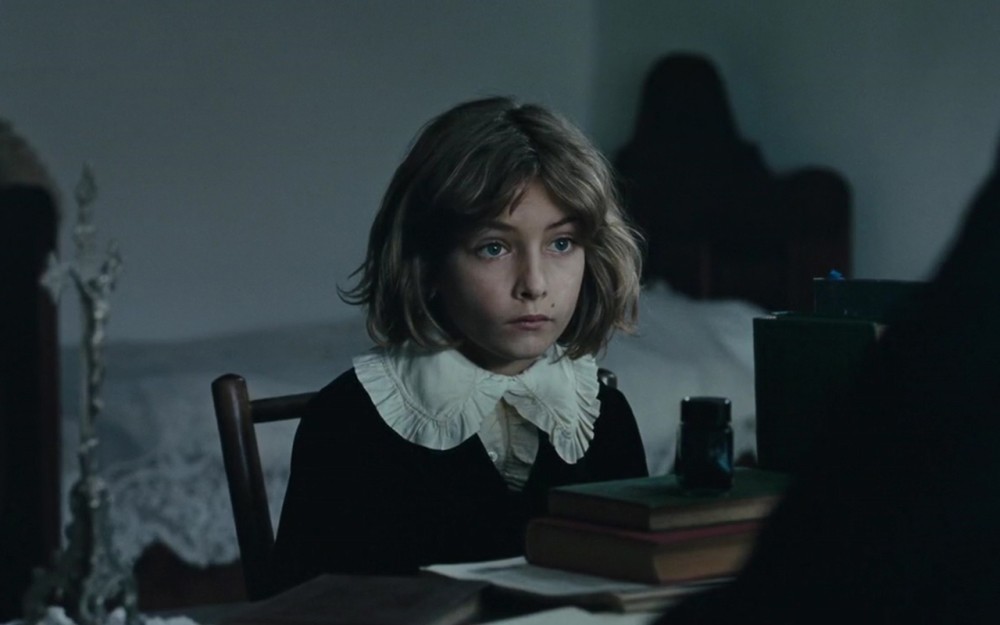 Again, through very subtle signals, and a scene in which Prescott is asked to apologize from the priest of the church where he has attacked the boys in the first scene, we learn that the mother is very cultivated - she is German, and speaks French and English very fluently- and finds her marriage to this American diplomat stifling. We never learn why she married him in the first place: the film doesn't go for backstory scenes like that. It manages to suggest that there is a very long history in the acts of small and big aggressions we see the family members commit against one another. The boy too has already mastered passive and active aggression and of course it looks all the more unsettling when we see him respond in kind to his parents' emotional violence. The mother's rancor towards the world in general is revealed in the conversation she has with her son's French tutor as she's firing her for misconduct: I, too, was a multilingual woman with great potential like yourself once, she says in not so many words,and look where involving myself with men got me.

All of this is taking place in a big country house with dark and dank corners, in which the boy can easily find places to hide to listen in to conversations and even observe his parents in incriminating situations. While all of these micro-aggressions are going on, the father invites a number of delegates fromVersailles talks to the mansion, so that they can have private meetings, without Wilson's interventions. They lay out maps on huge tables and discuss the future of Europe while Prescott is plotting ways to get back at his parents and assert his will over them. At the meeting there's even a John Maynard Keynes figure, warning the delegates of what will happen if Germany is left with no resources. The talk is all about "coal" and it carries the sort of weight that oil has in discussions over maps today. "One way or another we will force the world to be a better place" says one of the delegates, nationality undisclosed, and yet with an American accent.

The most symbolic scene of the film comes when the father enters Prescott's room after he locks himself up in his room for days. They are supposed to be attending the finalization of the Versailles Treaty, and the way he gives his son a lashing as he keeps saying "We are going to Versailles" must be the best metaphor for the road that took Europe to Versailles and what was achieved there. As he forcefully puts a "nice shirt" on his son, he breaks his arm. Yes, the son is Europe, broken in more ways than one, and he will seek revenge on his parents. This leads us neatly to the Third Tantrum where, at a very nice and lavish dinner party, Prescott stands up and keeps shouting "I don't believe in praying anymore", adding another layer to his small tortured body being a metaphor for Europe. His broken arm in a sling, shouting at the top of his lungs: it's a pretty difficult scene to watch.

There are enough horrible instances in Europe's history of war for inspiration but where does Brady's particular dark vision come from? He has acted in Michael Haneke's 2007 remake of his own domestic horror masterpiece "Funny Games" and Lars von Trier's apocalyptic tale "Melancholia." I can't think of two other films that expose the anxieties of the global north better. In "The Childhood of a Leader," in a way, Corbet goes back to one of the original sins of the developed world. The film makes one wonder about the behind-the-scene happenings at the current peace talks one hears about on the news, dealing with this or that prolonged conflict in the world. It seems to suggest that the micro aggressions we experience and inflict on one another are mirror images of those committed by larger political powers - but which feeds which, or which gives rise to the other in the first place is a conundrum we still can't solve.
RELATED TOPICS