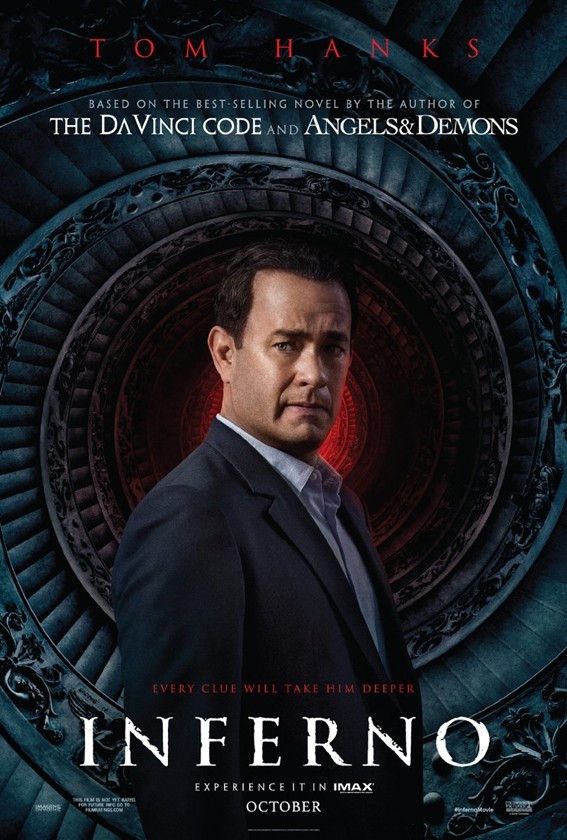 Author Dan Brown's world-renowned character Robert Langdon returns to the silver screen with the new adaptation of "Inferno." Starring Tom Hanks, Felicity Jones, Ben Foster and Irrfan Khan, the film, which is also set in Istanbul, is directed by Ron Howard. Robert Langdon wakes up one day in a hospital without any recollection. All of a sudden, he finds himself dragged into a scenario in which he has to decode the hidden symbols in Dante's "Inferno" in order to save the world. A chain of symbols takes Langdon to Istanbul, a place that was home to three empires and has the power to change the course of history.

Starring Robert De Niro, Edgar Ramirez, Usher Raymond and Ruben Blades in the leading roles, "Hands of Stone" is directed by Jonathan Jakubowicz and tells the story of legendary boxer Roberto Duran and his trainer Ray Arcel. Set in the golden age of boxing, from 1964 to 1983, the film focuses on the historic rivalry between Duran and another boxing legend, Sugar Ray Leonard.

Auf Einmal (All of a Sudden)

The German production "All of a Sudden" is directed by Aslı Özge, who has won many awards at various international film festivals with her films "Köprüdekiler" and "Hayatboyu." Starring Sebastian Hülk, Julia Jentsch, Hans Zischler and Sascha Alexander Gersak, the film focuses on the lives that are changed by a momentary incident in the German countryside. An incident whose outcome cannot be predicted turns people's lives upside down and makes them question their existence.

Seni Seven Ölsün (Death to Those Who Love You)

Directed by Cem Tabak, the Turkish romantic comedy film focuses on a small village in the Black Sea region. Due to an ancient spell, people who love each other cannot get together for hundreds of years. Two young lovers try their best to break the charm and be together for eternity.

Oğlan Bizim Kız Bizim (The Boy and the Girl Are Ours)

Turkish comedy film "The Boy and the Girl Are Ours" is about a girl who wins a competition in a resort and meets her Prince Charming. Starring Aras Aydın, Melis Babadağ, Bala Atabek, Emrah Şahan and Mustafa Şen, the film is directed by Semra Dündar.

Another Turkish film of the week is "The Gang of Unlawful," starring Osman Sonant, Beyti Engin, Mesut Can Tomay, Kadir Çöpdemir and Pascal Nouma. The film recounts the funny story of two close friends who seekhappiness in life.

This week's horror film is Ahmet Can Kasap's "Berzah: The World of Jinni" follows a young man who has isolated himself from everybody around him. However, the one thing nobody knows is that he is hunted by supernatural forces and fights for his life and tries to remove their control over him.
RELATED TOPICS