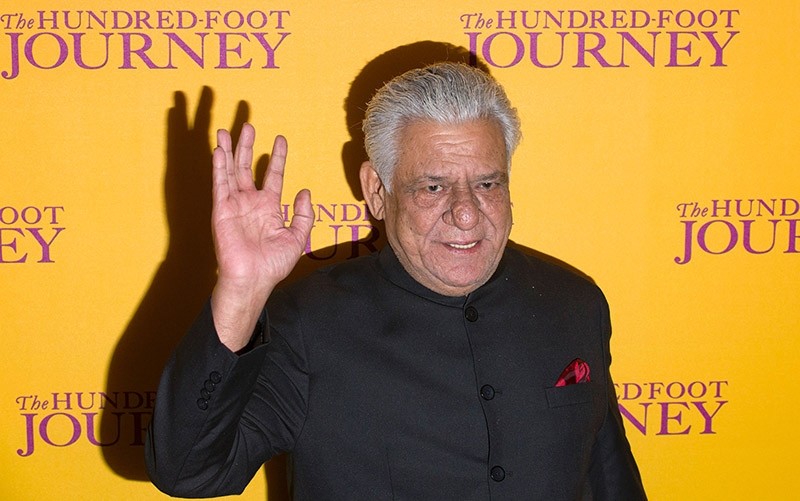 This file photograph taken on September 3, 2014, shows Indian Bollywood actor Om Puri waving as he attends the UK Gala Screening of the film, The Hundred Foot Journey, in central London. (AFP Photo)
by Compiled from Wire Services Jan 06, 2017 12:00 am

Noted Indian character actor Om Puri, who starred in acclaimed Indian and foreign productions, has died in the western city of Mumbai at the age of 66.

Puri suffered a heart attack at his residence in Mumbai, his estranged wife, Nandita, told the News18 network.

In a career spanning more than three decades, Puri had won a slew of national awards and international fame for his work in several critically acclaimed films.

His breakthrough film was the 1983 gritty drama "Ardh Satya" or "Half Truth," about a young policeman's crisis of conscience as he deals with the nexus of crime and politics in India.

He also acted in the British comedy East is East, about the life of a Pakistani immigrant in England and had a small role in Richard Attenborough's film "Gandhi," based on the life of the Indian freedom leader Mohandas Gandhi. He also acted in several Hollywood films, including "City of Joy" with Patrick Swayze, ''Wolf" with Jack Nicholson and "Charlie Wilson's War" with Tom Hanks.

In 2014 he starred with British actress Helen Mirren in the comedy "The Hundred-Foot Journey."

Puri was made an honorary officer of the Order of the British Empire for his contribution to British cinema in 2004.

"Who dare say Om Puri is no more? He lives through his work," actor Kamal Hassan tweeted.

Along with Naseeruddin Shah, Shabana Azmi and Smita Patil, Puri was seen as one of the stars of the alternative cinema movement that contrasted sharply with Bollywood's often crass content.

His distinctive baritone, and ability to switch seamlessly between art house, Bollywood, Hollywood and British film, made him an international star, one of the few Indian actors to cross over to the West before the likes Irfan Khan and Priyanka Chopra made the jump.