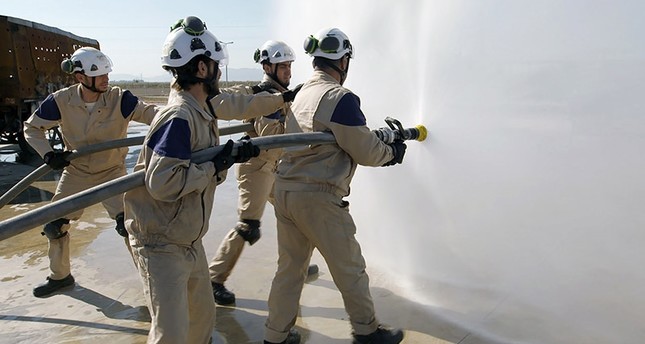 The Netflix film focuses on the rescue workers who risk their lives to save Syrians affected by civil war, now in its sixth year. The film often captures the highly dangerous moments when the White Helmets arrive at the scene of an airstrike, which may be imminently bombed for a second time in a so-called "double tap" attacks.

Director Orlando von Einsiedel and producer Joanna Natasegara accepted the Oscar, but devoted most of their short time on stage to sharing a statement from the absent 21-year-old cinematographer Khaled Khateeb, who was unable to attend Sunday's ceremony after his entry into the United States was blocked.

Director Orlando von Einsiedel urged Oscar attendees to stand up to demonstrate their support for a quick end to the Syrian civil war, which prompted a standing ovation.

"We're so grateful that this film has highlighted our work to the world," said the statement, read by von Einsiedel. It also thanked the academy for the recognition and stating that the organization had saved 81,000 lives.

"The White Helmets" said on Monday he hopes the award will serve as an inspiration to his volunteers to keep up their mission in the war-torn country.

Raed Saleh of the Syrian Civil Defense — popularly known as White Helmets — also appealed on governments around the world "to stop the bloodshed of the Syrian people."

Speaking in a video recorded in southern Turkey, he quoted from the Quran: "Whoever saves a life — it is as if he has saved mankind entirely."

The Oscar for the best documentary short "will inspire our volunteers with the moral support to continue rescuing civilians in Syria," Saleh said.

The film focuses on Syrian first-responders, rescue workers who risk their lives to save Syrians affected by the civil war,

Many of the group's members have been killed by Bashar Assad's war planes. The volunteers' struggle to reach those bombed in the opposition enclave of eastern Aleppo, just before the city completely fell to the regime forces in December, was especially poignant. The group also was nominated for last year's Nobel Peace Prize.

The White Helmets did not have a representative at the Los Angeles Oscars ceremony after U.S. immigration authorities barred entry to a 21-year-old Syrian cinematographer who worked on the film.

Khateb told The Associated Press on Monday from Turkey that though he said he had expected the documentary to win, he didn't sleep all night but smoked shisha with friends and watching the ceremony in Istanbul.

"It is a media prize, it's not a political prize ... But still it sheds light on the tragedy of the Syrian people. Maybe it will help stop some of the massacres," he added. "It is a strong movie."

Khateeb was scheduled to arrive on Saturday in Los Angeles on a Turkish Airlines flight departing from Istanbul.

His plans were upended after U.S. officials reported finding "derogatory information" – a broad category that can include anything from terror connections to passport irregularities – regarding Khateeb. According to internal Trump administration correspondence seen by The Associated Press, the Department of Homeland Security decided at the last minute to block him from traveling to Los Angeles for the Oscars.

"I tried and it didn't work," Khateeb said of his hopes to attend the ceremony. "It is America's loss!"

It is the second win in the category for writer-director Asghar Farhadi, who previously won for 2011's "A Separation." He boycotted the Oscars in protest of the travel ban imposed by President Donald Trump's administration.

In a statement read on his behalf, Farhadi wrote that filmmakers create empathy between others, and that is more needed today than ever.

"The Salesman" is a thriller about a married couple's attempts to find peace and justice in Tehran after the wife is attacked in her apartment.