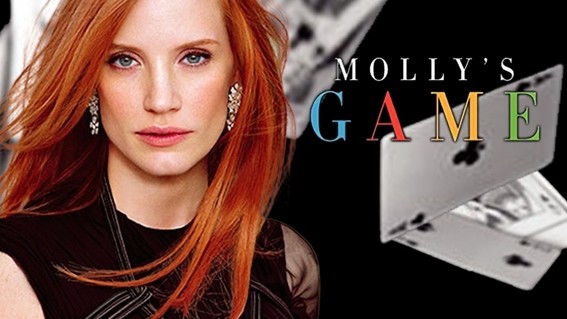 The film stars Jessica Chastain as the former Olympic skier Molly Bloom, who went on to run one of the largest high-stakes poker games in the United States.
by Sep 11, 2017 12:00 am

The American crime drama stars Jessica Chastain as the former Olympic skier Molly Bloom, who went on to run one of the largest high-stakes poker games in the United States.

Her games at their peak required a $250,000 buy-in and attracted some of Hollywood and New York's elite - as well as mobsters - but she withheld most of their names in her memoir.

The film follows suit, though the identities of some of her regulars have emerged including several who were arrested.

"We live in a time when people sell each other out," Sorkin told journalists. "The rest of us don't seem to mind that that just happened. We're not calling the seller out."

"Molly (had) no sense at all that she was going to do something heroic, it just came naturally to her not to do the wrong thing," he said.

The film also features Kevin Costner as Molly's hardnosed father and Idris Elba as the attorney who defended her in court - and for taking a moral stand by not informing on her clients.

The film was shot in Toronto. Molly, who is banned from Canada because she pleaded guilty to a federal crime in the United States, was granted special permission to enter the country in order to attend the film's premiere here.

"For two years Hollywood had been chasing Molly's story because there are a lot of shiny objects in there, the poker, the women, the tonnes of money, the powerful men," Sorkin commented.

His movie renounces glamour and salaciousness in favor of trying to help audiences understand this complex woman.

"I have no visual sensibility at all. I hear movies more than see them," Sorkin explained.

"There's a tremendous amount of language in these scenes," he said. "I'm always most comfortable as a writer inside four walls. I like just writing people talking in rooms."

One of the hardest challenges in making this film, he said, was trying to make poker interesting.

"I needed poker to look exciting and it's not," he said. "It's the world's worst spectator sport."

Sorkin said he was moved to make a film about Molly after meeting her in person.

He described her as a woman "in deep, deep trouble" after her arrest with no prospects at age 39, for a run-in with "an illegal poker game from a really long time and pleading guilty in federal court in a mob indictment."

"A woman who is in that kind of trouble is saying no to what I assume was a lot of money," he said, "which nowadays is even more attractive."

Sorkin is perhaps best known for his work on the hit television series "The West Wing."

Asked how he might change the show to suit the current political climate, he answered: "Not a thing."

"I would do the exact same show where we get to see and hear what it looks and sounds like when well-intentioned, thoughtful people - with whom we may have differences of opinion, but whose intentions are unimpeachable - are working hard and are dedicated to public service," he said.

Sorkin said the idea behind the series, which ran from 1999 to 2006, was to "show a very highly competent group of people who may slip on banana peels from time to time but who we understand are waking up every morning with our best interests in mind and who are hyper competent."

"So I would just keep doing that and once a week we'd hear what a press conference should sound like," he said, seemingly alluding to U.S. President Donald Trump's mercurial tendencies in front of the podium.

Sorkin has been quoted in U.S. media to describe Trump as "a thoroughly incompetent pig with dangerous ideas."