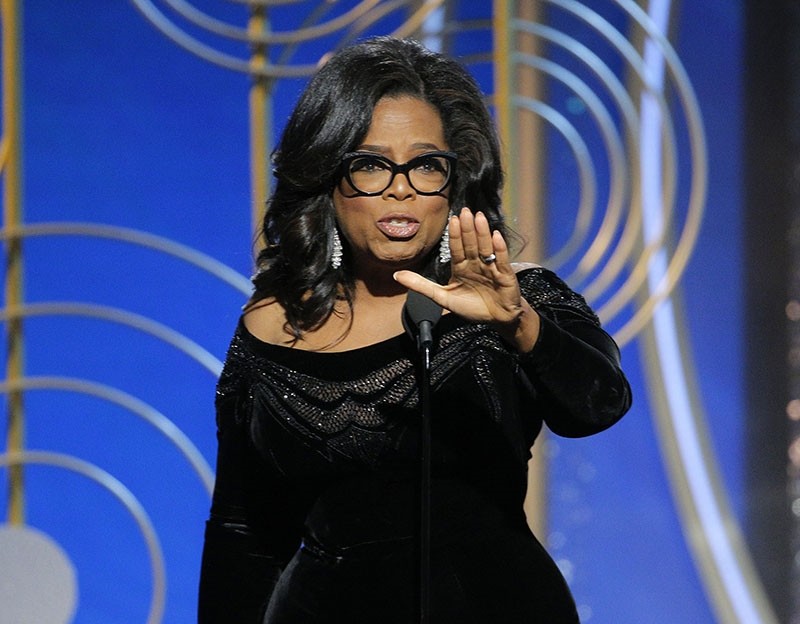 With a red carpet dyed black by actresses dressed in a color-coordinated statement, the Golden Globes were transformed into an A-list expression of female empowerment in the post-Harvey Weinstein era. Oprah Winfrey led the charge.

"For too long women have not been heard or believed if they dared to speak their truth to the power of those men," said Winfrey, accepting the Cecil B. DeMille Award for lifetime achievement. "But their time is up. Their time is up!"

More than any award handed out Sunday at the Beverly Hilton Hotel in Beverly Hills, California, Winfrey's speech, which was greeted by a rousing, ongoing standing ovation, encapsulated the "Me Too" mood at an atypically powerful Golden Globes. The night — usually one reserved for more carefree partying — served as Hollywood's fullest response yet to the sexual harassment scandals that have roiled the film industry and laid bare its gender inequalities.

"A new day is on the horizon!" promised Winfrey, who noted she was the first black woman to be given the honor.

Her moving speech at the Golden Globes has some fans and fellow celebrities calling for her presidential run. It didn't take long for Twitter to start lighting up with the hashtag #Oprah2020.

Winfrey brought the typically rowdy crowd to silence and tears with her speech.

She spoke of seeing Sidney Poitier win an Academy Award when she was a girl, and weaved it into the #MeToo movement.

She says "speaking your truth is the most powerful tool you all have."

With a cutting stare, presenter Natalie Portman followed Winfrey's speech by introducing, as she said, "the all-male" nominees for best director.

The movie that many believe speaks most directly to the current moment — "Three Billboards Outside Ebbing, Missouri," about a mother avenging the rape and murder of her daughter — emerged as the night's top film. It won best picture, drama, best actress, drama, for Frances McDormand, best supporting actor for Sam Rockwell and best screenplay for writer-director Martin McDonagh.