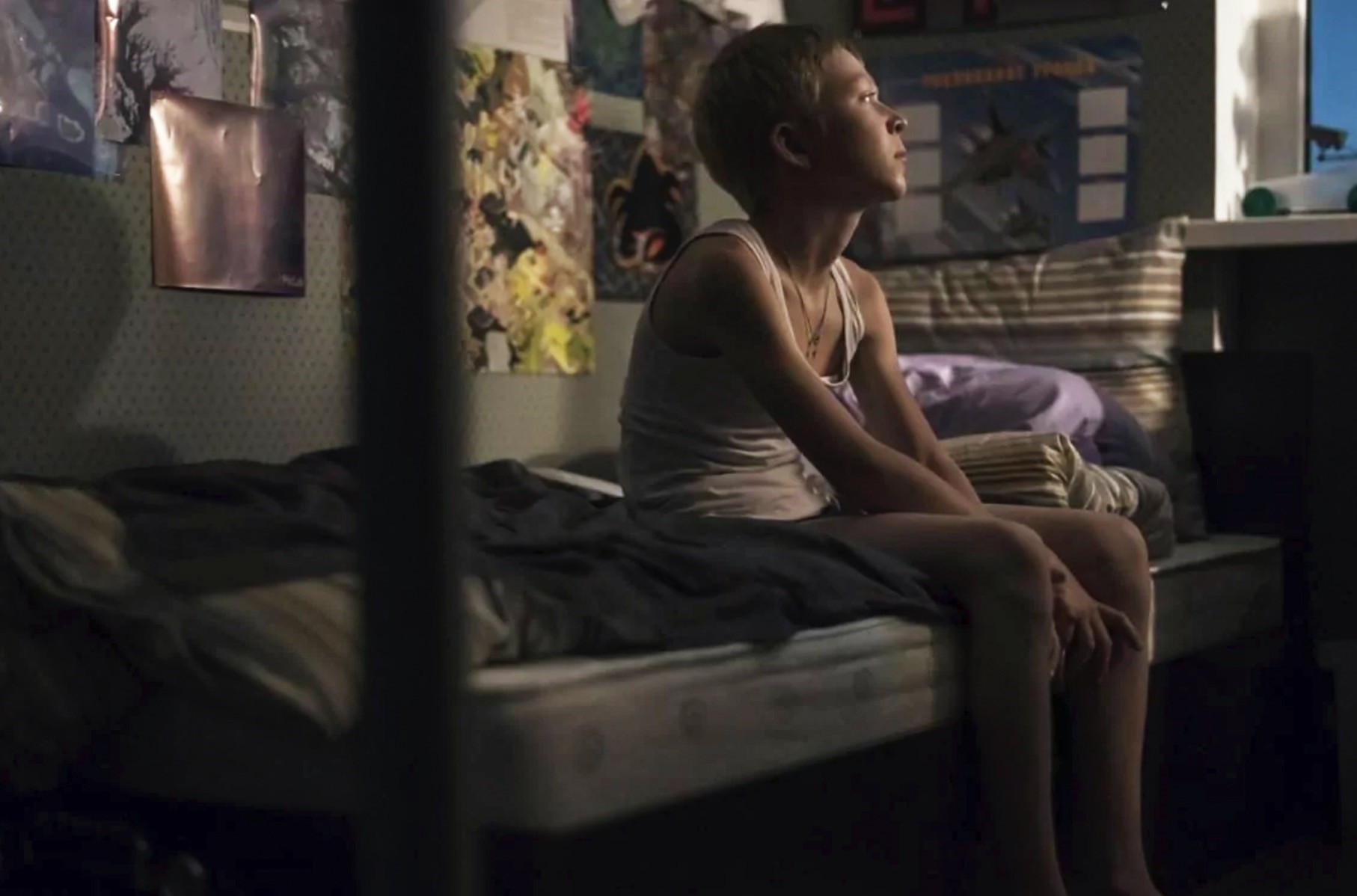 In u201cLoveless,u201d the little boy Alyosha tries to go about his daily life with no help from his father and scant help from his mother Zhenya.
by Nagihan Haliloğlu Mar 14, 2018 12:00 am

Andrey Zvyagintsev's 'Loveless' and Simon Lereg Wilmont's 'The Distant Barking of Dogs' depict the lives of children living through the fall out of Russia's domestic wars. In 'Loveless,' the warring parties are a couple going through divorce, and in 'The Distant Barking of Dogs,' the two sides are Ukraine and Russia fighting for Donetsk. In both, audiences are given a picture of what the children caught up in these wars go through, a picture often too intimate to bear

Children are the casualties of all kinds of wars, and the psychological scars they bear are just as deep. We are flooded with images of children caught up in conflicts in different parts of the world every day and now and then, one image touches our calloused hearts, but then that too is forgotten. Andrey Zvyagintsev's feature film "Loveless" and Simon Lereg Wilmont's documentary "The Distant Barking of Dogs" are two films that give us such images and remind us that we live in a world where civil wars become metaphors for domestic wars and vice versa.

I call the children suffering in these films "Children of Mother Russia" advisedly. While "Loveless" is set in Russia, "The Distant Barking of Dogs" is set in a Ukrainian border town, and we are told that one of the children at the heart of the story has a hard time at school when he goes to the west of the country because he speaks Russian. 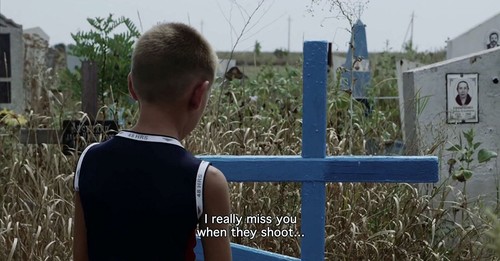 Oleg speaks to his mother at her grave.

In "Loveless," Zvyagintsev continues his requiem for the collapse of the family unit in Russia, after his "The Return" and "Leviathan." We witness the breakup of a nuclear family, the mother and father full of recriminations, treating their only son as the bitter fruit of a union that probably should not have happened in the first place. Later scenes reveal that the reason the marriage has gone on as long as it has is because the father works for a fundamentalist Orthodox man who does not allow divorce among his employees. Not because they have a son, Alyosha, whose needs they might also consider. Alyosha does not come into it at all. And when Alyosha discovers that he has no place in either of his parents' future plans - a scene of utter despair that can rival Edvard Munch's "Scream" -he decides to disappear. It is the sort of scene that makes the viewer want to break the fourth wall, go in, give Alyosha a hug and take him out of that dark universe.

As in Michael Haneke's "Love," in "Loveless" the flat becomes a character in its own right. While Alyosha tries to go about his daily life with no help from his father and scant help from his mother Zhenya, prospective renters come to the house and check out the various rooms, including Alyosha's. It is a collection of things from his mere 12 years in this unforgiving world: Things he probably once held dear, but things he now knows he ought not to have become attached to, because he does not know where he will be tomorrow. Being kept in the dark by his parents as to where he will live, he responds in the only human way, by keeping his parents in the dark about where he is.

Alyosha's room looks over a park and woods. It is these woods the film opens with: A lingering shot of the winter trees and the river, giving us an index of places where Alyosha might seek refuge later in the film. The way the camera lingers on this scenery helps us appreciate it like a painting, and in the sequence at the end of the film, the same scene is almost transformed into Brueghel's "Hunters in the Snow," particularly when we associate this frame with the "hunters" that are now looking for Alyosha. It is, indeed, a painting that filmmakers are fond of quoting, from Andrey Tarkovsky to Lars von Trier and Abbas Kiarostami. The atmospheric music and these references give Zvyagintsev's film a depth of emotion that is at times hard to bear.

The darkness of this universe is multiplied in the TV sets we see in the film now and then, reporting on the Russian-Ukrainian war. The darkness that children experience in the borderlands between Russia and Ukraine is in turn explored Wilmont's documentary "The Distant Barking of Dogs." The film follows the story of Oleg who lives with his grandmother in a small village called Hnutove, within hearing distance of the Ukrainian-Russian war. Hnutove is as depressed as any post-Soviet town, and many of the residents have sought to build their lives elsewhere. We see early in the film that Oleg and his grandmother cannot leave because Oleg's mother is buried there, and they visit her grave often and talk to her. We are not told how she died, and there is never any mention of where the father might be.

Like Alyosha in "Loveless," Oleg has formed a relationship with his immediate natural surroundings. We see him walk through the tall grass and enjoy swimming in the lake while counting the shell and mortar exchanges between the Russian and Ukrainian armies. He has, unfortunately, also formed a bond with his unnatural surroundings - abandoned factories and silos where he practices shooting with an older boy who likes to show off.

Soon though, Oleg has to play big brother himself, as his aunt leaves her son Yarik to stay with him and his grandmother because she has found a boyfriend who is in the army and who wants to take them away from the town. We see the cousins interact in their grandmother's home - not unlike a typical Anatolian interior - with mattresses, eiderdowns and cushions providing for a makeshift gymnastics space. We see them interact with Yarik's mother, who is pruning herself to look attractive for her new man. Her desperate need to be loved and to be liked on social media mirrors Zhenya's scenes from "Loveless." She too is incapable of recognizing the same need for love in her own son, outsourcing it to her ailing mother. In that sense, Yarik is luckier than Alyosha; there is at least one grown up who will show him affection.

When we consider the two films together, the scenes between the grandmother and the children in "Distant Barking of Dogs" set in relief the complete helplessness of Alyosha, whose grandmother turns out to be a bit of an ogre, explaining Zhenya's own deficit of motherly love. Both films expose the women's relationships with their children and give the viewer an easy target when looking for someone to blame for the youngsters' unhappiness. While Zhenya has launched a relationship with an older man and is unlikely to have more children, her husband Boris is shown to be expecting a son with his new younger partner, making him somehow more capable of fatherly love.

In both films, of course, the real mother is Russia, fighting, getting in and out of relationships, without caring about how it affects her children. In "The Distant Barking of Dogs," the motherless Oleg seems to take things in his stride, but the younger, frailer Yarik finds it difficult to accept that he will have to lead a motherless life. When Yarik grasps that his mother is leaving him for a new boyfriend, he strokes his grandmother's cat and says, matter-of-factly, "The cat will be my mother," in a scene that doesn't quite replicate Alyosha's silent scream but comes close. The documentary ends with footage of the cousins at dinner table with the guns going off louder than they have before in the film. Yarik is still a normal child, scared, as any small human would be. His thin arms stick out of his white undershirt, and he shudders every time the house shakes with the sound of bombing as he is trying to bring his fork to his mouth. He looks at his older cousin, clearly wishing to be as fearless as him, and one wonders in how many houses this domestic scene is repeated throughout the world. Wilmont dares us to shudder with Yarik to test whether there is any human empathy left in any of us.