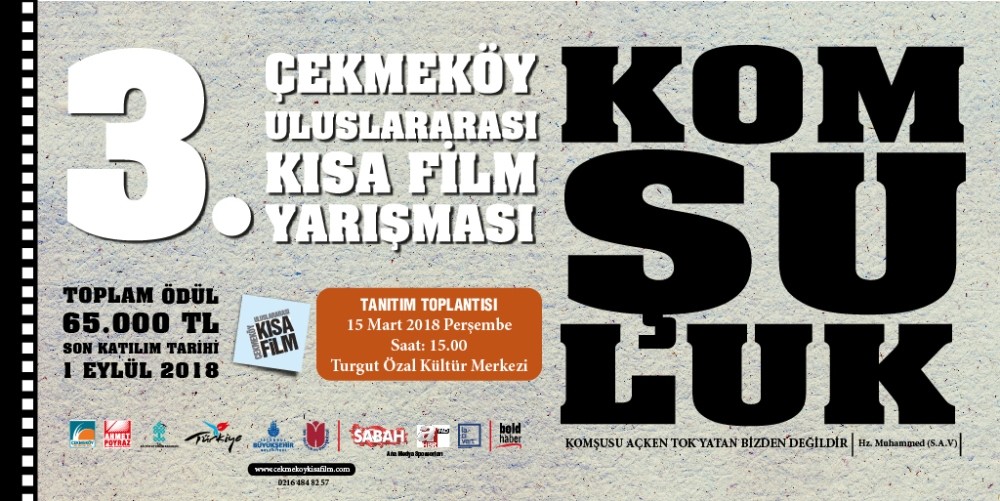 Çekmeköy Municipality's 3rd International Short Film Competition is now accepting applications. The introductory meeting for the competition, which has neighborhood as its theme, was at the Turgut Özal Cultural Center. Speaking at the meeting, Çekmeköy Mayor Ahmet Poyraz said that Turkish society has forgotten neighborhood values.

He said that the Prophet Muhammad had also spoken about the importance of sharing. "If there is some who can sleep while his or her neighbor is hungry, our services have no meaning," Poyraz said.

"Not only as individuals, but we as a country come to neighboring countries' assistance. We want to bring to mind a value that has gone through a change after modernism with this theme."

Çekmeköy Deputy Mayor Şahmettin Yüksel, who is also the coordinator of the competition, said that cinema is an important part of art. "We continue to organize art and culture events as the municipality since we think that art revives nations. We held our short film competition under the themes of mercy and justice in 2016, and July 15 betrayal and resistance in 2017 in this context. We chose neighborhood to be the theme of this year's competition."

He said Anatolia is a neighbor of many societies of different languages, religions and communions. "We are the ones who will transfer this neighborhood culture to the next generations as the children of these lands. We are the grandchildren of ancestors who know the law of neighborhood and brotherhood. Neighborhood is a tradition that we have sustained for centuries together with Islam."

'Nation that comes to everyone's assistance regardless of place or border'

"Culture is the spirit of a nation and the potion of life. It is one of the steps that provides salvation and rising. A nation can't continue without culture like a body without a soul can't live. The basic function of culture is to lay a bridge between us and the next generations, sustaining our traditions and values. We first want to serve our culture with the theme of neighborhood because we are a nation that comes to everyone's assistance regardless of place or border," Yüksel said.

Jury member Birol Güven said that "Seksenler" (The '80s), which he wrote, is a TV series about the neighborhood.

Güven said new films should be shot with the theme of the neighborhood, and added: "Short filmmakers do something against something. They don't have enough budget and can't spend money. Therefore, they need to find ideas. This is why the best ideas are created by short filmmakers instead of feature filmmakers. We expect big ideas in this competition. Ideas are free."