South African director Jenna Cato Bass's film ‘High Fantasy' is about a group of young people from the ‘rainbow nation' on a camping trip. After they reach their destination - an abandoned farm belonging to the white girl of the group - they undergo a strange collective experience that may or may not help them understand one another better

Towards the end of "High Fantasy," a film I have already been watching with bated breath from its beginning, Xoli, the black girl in the film, goes on a tirade about Lexi, the white girl, who, Xoli argues, assumes that the story is always about her. It's a moment that checks the viewer: "Who do you think is the protagonist of the story?" A question that is always at the heart of any literary work and indeed criticism.

"High Fantasy" is a South African film about four young people of different ethnicities going on a road trip. The scenes in which they are enjoying the open space are interlaced with scenes in which they are answering questions from an unseen interviewer. They are at times uneasy, at times jokey. The road trip, seen at times through the cameras that the young people are using, and at times through the eye of the director unfurls in very familiar fashion. It is very believable as a fun escapade: At one point one of the girls tries to take a selfie of the whole group and as we watch them through her camera says: "Hold on, I think it's on video." That, as everyone knows, is something that always happens in selfie sessions, and such details give the film its sense of telling a "true story." 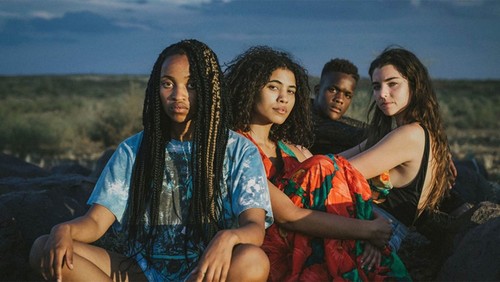 "High Fantasy" is a South African film about four young people of different ethnicities who go on a road trip.

The film very slowly gets into the territory of racial politics in South Africa. The one boy in the group - whom we later learn has been a last moment add on, to provide some kind of protection for the girls - is black, and we see him haul his body out of one of the windows of the car and talk about how awful it was that "all this land" once upon a time belonged to a white man. But there is no conviction in what he is saying: He seems to be saying it because it is something one says on such occasions. The rainbow nation of South Africa - a description Thami ridicules in his interview sections - has put all that behind. We learn that the group is actually heading to Lexi's family's disused farmhouse. There is an atmospheric scene in which they reach the house and the young people go through the "white materials" of the white settlers.

The group entertain themselves by displaying their talents to one another. Thami, the black boy, "drops bars," composing lyrics about their trip, Xoli, the black girl, does a tribal dance that involves tricky footwork. Lexi, the white girl, prefacing it with "I'm going to sound so white" recites some kind of incantation in one of South Africa's many African languages, which sounds very convincing to my Turkish ears. We are given to understand all are more or less comfortable using the oral and bodily language of the others, until "it" happens. Despite Xoli's continuous criticism of Lexi's white heritage, the real fault line before 'it' happens seems to be between the sexes. Thami, with his macho language, offends the girls and gets lectured at by them. Xoli criticizes Thami at length about using pejorative words for women, while using a slang expletive for a black person in the same breath.

I guess it isn't a spoiler to say that "it" is the body swap that occurs between the young people (it is in the trailer). Xoli wakes up in the body of Lexi, Lexi wakes up in the body of Tatiana, Thami wakes up in the body of Xoli, and Tatiana wakes up in the body of Xoli. You have given us the races of Xoli, Lexi and Thami, but who is this Tatiana all of us a sudden, you may well ask. And that is a crucial question. I have thought about the different ways of describing her. She is not white, but not as black as Xoli either- mixed race, but also something about her made me think of my Indonesian South African friends, Cape Malays. The inbetween color in the rainbow of South Africa. I try to place the character - the name Tatiana is not helping much- by checking the name of the actress: Liza Scholtz. Multiculturalism:1, Haliloglu:0. Tatiana is just Tatiana, seemingly calmest of them of all, possibly because her stake is the lowest in the racial balance. Not implicated enough in the crime, not oppressed enough by racism. And a great refuge for the white girl's persona when the body swap happens.

When the body swap happens, even those of us who thought they knew who the protagonist was don't know where to look any more. The most violent reaction to the body swap comes from the persona of Xoli, who hates being in a white body, and sees this as the last in a series of violations Lexi's ancestors have inflicted on black South Africans. There is, in her reaction, something that calls to mind Fanon's "Black Skin, White Masks." The very idea of a psychoanalytical reading, that she might be thought as having wished to be white rightly infuriates her. In her rage she says that it's the proximity of Lexi's white ancestors' ghosts that has caused this to happen. Francesca Varrie Michel as Lexi is so great at acting out Xoli's hatred of the white body that my eyes follow her on the screen when I catch myself and ask: "If the protagonist now is Xoli's black spirit trapped inside Lexi's white body, who is it am I watching, really?" Jenna Cato Bass thus throws us into the realm of who owns whose story and who gets to enact it for whom. But then she also uses the more conventional, comical characteristics of the body swap story, with Thami exploring Xoli's female body as his own, and Tatiana experimenting with Thami's private parts. The exploration of the bodies reveals Thami's to be severely scarred, and the director Bass intersperses these scenes with drone shots of the veldt, acquainting us with the skin of South Africa itself, with its own knots and bolts and cracks.

It is again no spoiler to say that they switch back; in the post-trip interview scenes they are all "themselves." They switch back when Xoli's persona in Lexi's white body is away from the group, refusing to interact with them. Back in her white body, which has been insulted by her friend Xoli in several ways, Lexi is not pleased, and now it is she that goes away. The white body as Xoli or Lexi seems always quarantined. It is when Lexi stays away too long and the friends start worrying about her that Xoli delivers her speech that had me at the edge of my seat. When Tatiana suggests calling the police to look for Lexi, Xoli is incensed and it is in these moments that we learn that all three female friends have been involved in the student protests of 2015, and the police is anathema to Xoli. Although it is an angry speech it is one that has at least transcended race, pointing to a movement that can be joined by white and blacks alike. But then again, Xoli refuses to go out of her way to look for Lexi who is having a "drama queen" moment, thinking this body swap experience has affected her more than the others. So, in effect, by the end of the film no one's the wiser. It takes more than a few days spent in another's skin to understand how those different to us have been treated by the system.