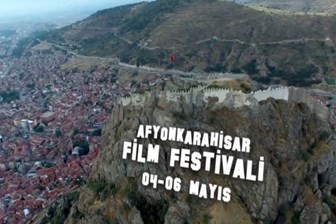 Twenty out of 311 short films will go to the finals for the Afyonkarahisar Film Festival, held between May 4 and 6 in Afyonkarahisar province. Festival director Süleyman Civliz said, "We do not want this festival to be an ordinary city and film festival. We aim to make it a festival that becomes a tradition and a brand with developments in Afyonkarahisar."

The first jury comprising of Musa Ak, Serdar Sabuncu and Bedirhan Karakurluk chose 20 short films that will be presented to the main jury with studious works.

The festival features film screenings, conversations, workshops and a panel on the language of Turkish films along with a short film competition.

Civliz told Anadolu Agency (AA) that they have been working with a high tempo since November.

Cilviz explained that they want to hold a film festival representative of the history and culture of Afyonkarahisar, adding, "We are in the last phase now. Next week, we will organize our film festival. We hope it will be a glorious festival that will become a tradition in the city."

Mentioning that the theme of the festival is the local cinematic language of Turkish films, Civliz said, "We arrange every element of the festival around this theme. That is, the film screenings, conversations, workshops and other events here totally meet in the theme of the language of Turkish films. There is a short film competition part in the festival, as well. There was a broad participation for this part. Twenty films among the participants were chosen as they were promising and worth seeing."

Civliz said there are many important directors in the main jury. "They are very precious people. The jury president is Derviş Zaim. Mesut Uçakan, Tarkan Karlıdağ, Kudret Sabancı and Ensar Altay are the other jury members. I am sure the films that will be chosen by them will be the best ones," he added.

Special award to be given

Cilviz said they will present the awards with a glorious ceremony that will be held on the night of May 6, adding, "Three busy days are waiting for Afyonkarahisar because of the festival. These three days will be full of culture and cinema. In this point, great director Yücel Çakmaklı comes into prominence. He made great efforts to build the language of Turkish films with his works. We believe he led the way for the next generations. This is why we will give a special place to him in the festival. Two important films by the director will be screened and there will be conversations about him. The Yücel Çakmaklı Special Award will be given and we will commemorate him once again."