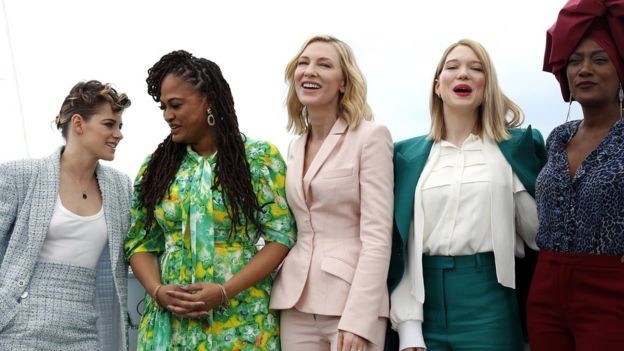 Veteran U.S. director Martin Scorsese and Oscar-winning actress Cate Blanchett officially opened the Cannes Film Festival on Tuesday, the first to be held since the cinema industry was rocked by the Harvey Weinstein scandal. In a year marked by the #MeToo movement, the jury of the Cannes Film Festival is both majority female and led by a woman. Here are the nine members:

The two-time Oscar winner from Australia is the 12th woman to head the panel of judges. The 48-year-old has emerged as a key figure in Hollywood's fight against sexual harassment.

One of the first women to call out Harvey Weinstein, Blanchett recently co-founded the "Time's Up" movement in support of abuse victims.

He has starred in several critically acclaimed Chinese-language films including Hou Hsiao-hsien's "The Assassin," which won the best director award at Cannes in 2015.

The 28-year-old has long been a darling of Cannes, appearing in the main competition in "On the Road" by Walter Salles in 2012 and Olivier Assayas's "Clouds of Sils Maria" and Woody Allen's "Cafe Society" in 2014. The award-winning actress also premiered her first short film as a director, "Come Swim," at the festival last year.

Burundian Khadja Nin has become one of French-speaking Africa's most celebrated singer-songwriters with her unique blend of Afro-Cuban rhythms and modern pop.

She has performed alongside music legends like Montserra Caballe and Sting, and collaborated with French screen legend Jeanne Moreau for a music video.

The trailblazing director, screenwriter, producer and distributor, who directed the Oscar-nominated civil rights drama "Selma," is the first African-American woman to helm a film with a budget over $100 million - this year's "A Wrinkle In Time" starring Reese Witherspoon and Oprah Winfrey. DuVernay's Oscar-nominated documentary "13th," named for the constitutional amendment that abolished slavery, offered a devastating account of the mass incarceration of black men in contemporary America.

French writer and producer Robert Guediguian is best known for the "The Young Karl Marx" and the acclaimed "Marius and Jeannette," the gutsy story of a single mother supermarket checkout worker. He also directed the much praised "Le voyage en Armenie," a story set in his ancestral homeland.

At 32, Seydoux is one of France's best-known actresses with a Palme d'Or already under her belt. Starring in pictures by heavyweights ranging from Quentin Tarantino to Woody Allen, Seydoux is arguably best known to global audiences for her turn as a Bond girl opposite Daniel Craig in 2015's "Spectre."

The director and screenwriter, whose update of the sci-fi classic "Blade Runner 2049" picked up two Oscars this year, is a frequent guest of the festival. The 50-year-old filmmaker made his Cannes debut two decades ago with "August 32nd on Earth" a drama about a model who confronts an existential crisis by deciding to have a baby with her best friend.

The Russian maker of such classics as "The Return" and "Leviathan" is regarded as one of the greatest directors in the world at the moment, with his last film "Loveless" as the critics' favorite for the Palme d'Or last year. It was pipped at the post by "The Square," but the sombre story of the warped values of the country's post-Soviet middle class was later nominated for best foreign film Oscar.