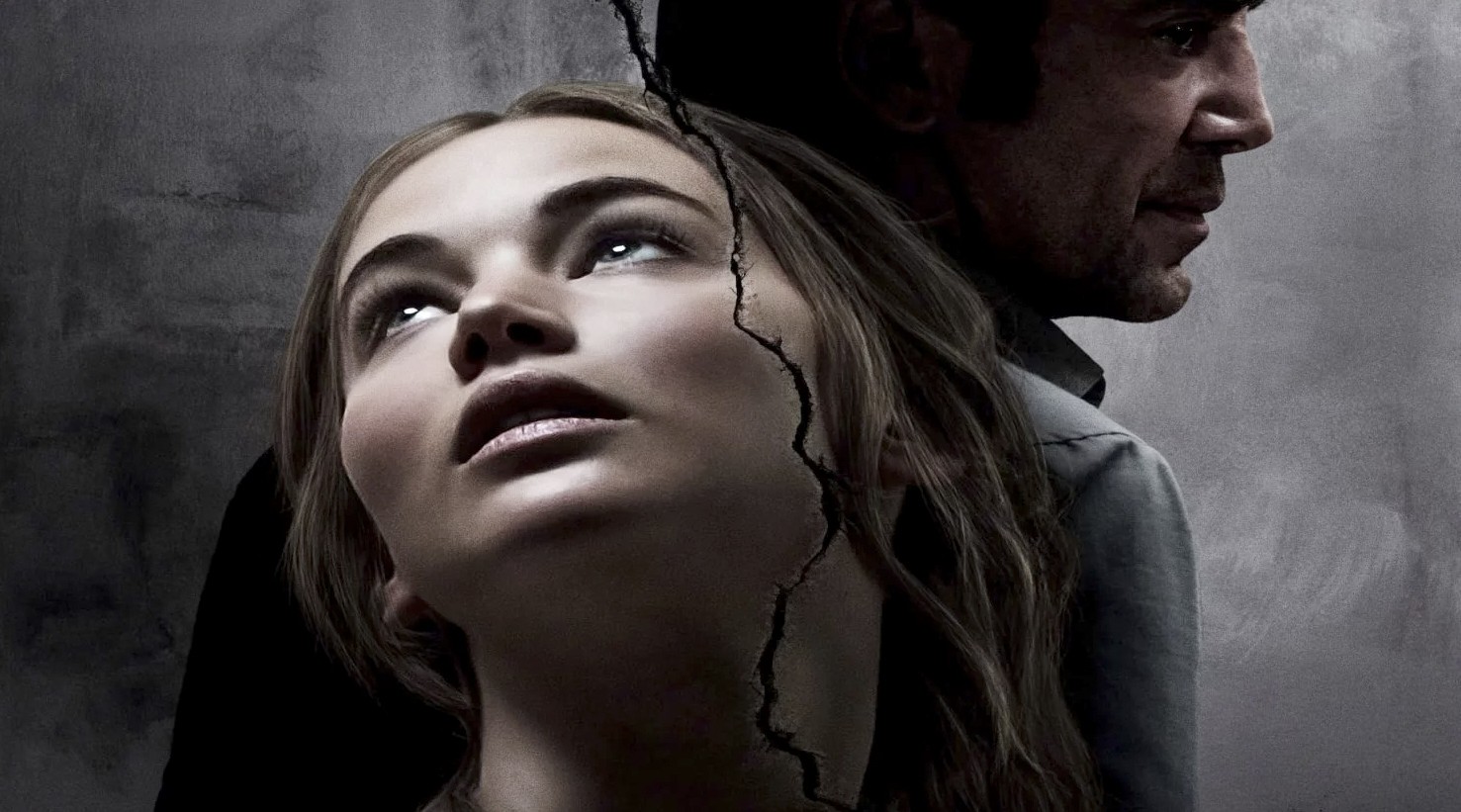 Darren Aronofsky’s latest film ‘Mother!’ is riddled with biblical references that question the meaning and purpose of the creative act. Initially parading as a psychological thriller about a couple living in an eerie house in the woods, it takes viewers to places they have not quite bargained to go

Early on in "Mother!" Jennifer Lawrence's character Mother observes with quiet horror that her husband, played by Javier Bardem, is finding it impossible to write. Bardem leaves the pen on blank paper, and the camera lingers on the scene of this abortive attempt. It is at this point of this atmospheric, eerie film that I say to myself, "Ah! Bardem is suffering from writer's block and Mother must be one of the previous characters he has written, now trying to give him inspiration," trying to fit the film into a meta-fictional frame. I have clearly forgotten that we are in a Darren Aronofsky film, and the stakes must always be higher.

Mother and "Him" – this is the name given to Bardem's character in the credits – live in a semi-decorated house in the country, and he is at a loss for ideas for his new work. Then, inspiration comes in the form of an old man (the ultimate unexpected guest, in fact the Turkish word for 'unexpected guest' would already give the game away) who has mistaken their house for a B and B, and Him invites him in, asks him to stay, without so much as asking Mother's opinion. There are several close ups of Mother's worried face, and you know things won't turn out well. Her bliss with Him has been breached, and there is more to follow. After a very strange night of scenes seen through doors half ajar, snippets of strange conversation, and Mother's routine hallucinations, the old man's wife, the forever attractive Michelle Pfeiffer arrives, and is equally welcomed by Him. Mother's worry about her place in the scheme of things gets deeper as the film turns into a house invasion story with Haneke-like undertones, and further hallucinations follow. 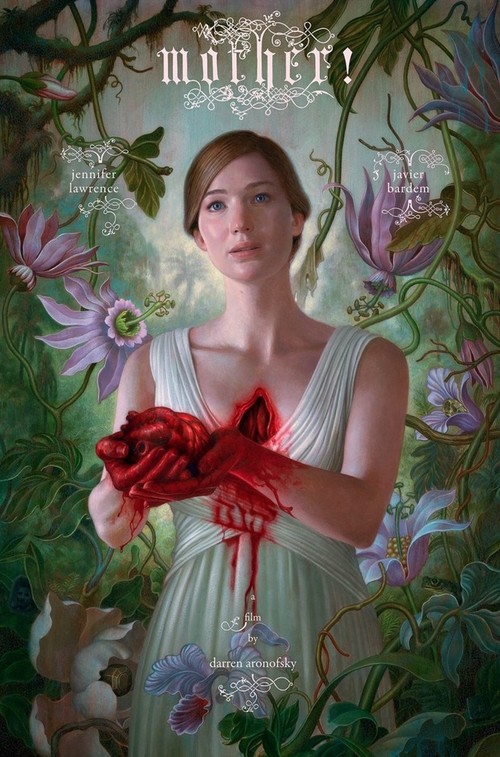 Now a word about these "hallucinations." It is somewhat with hindsight that we remember that the whole film has started with images of a fire and a zoom into a woman's red-burnt face with flames behind her. Then we see Him's face, and then he places a diamond on a very simple stand, and life, so to speak, oozes out of this diamond, and reinvigorates the charred house into the one that Mother and Him are living in now. And in my early naiveté I'm thinking, "Oh yes, the diamond symbolizes Him's creative energies which have given life to his house and Mother. This film is us watching his novel take shape in his head." It is this charred house that Mother has visions of as she's caressing the walls – we learn that she has built all of it; "for Him," she says – and then what's that? Something inside her keeps moving and contracting, but it doesn't look much like a fetus, the thing we are conditioned to think of in a film called "Mother!"

Him, it appears, is a very well-known writer, and he spends his time talking about his work with the couple that has come to stay. He says he's very happy that he can now spend time with people who appreciate his work. The ever-insecure Mother says "But I adore your work!" and it is at this moment that the full biblical scale of the metaphors dawn on me. I half expect her to add, "Why would you invite other beings that are going to destroy what we already have here?" paraphrasing that other, fallen angel. The invading couple are indeed slovenly and they drop things and generally make a mess of the house. They get into Him's sacred writing room and ask questions about the diamond. "When I was younger I lost everything in a fire, I didn't know if I could ever create again," Him says. I have enough presence of mind to conjecture that Him must have found the diamond in the remains of the charred house; something made of carbon must have burnt into the most perfect shape the element can take. I wonder what carbon thing might have transformed into this pure diamond through fire, oh me of little faith! It's as if I don't come from a country with a strong Sufi tradition! Him says it was a gift. When the couple ask whether it's from Mother, she is again distressed and says no.

Biblical metaphors keep piling up when both sons of the couple also find their way into the house, and one kills the other for the inheritance. We really are in Cain and Able territory now. Aronofsky fans may or may not remember that when his protagonist enters a small shop run by Muslims in New York in "Pi," it is Surah Yusuf playing on the tape/CD, that tale of brotherly envy. Nothing is incidental in an Aronofsky film.

The invasion theme continues when the dead young man's funeral is held in the house. Mother is now beyond belief, and the thing that contracts and beats inside her body seems to be turning to ash. The wake becomes a rowdy party as guests keep pouring in. She warns guests not to sit on a sink that she has just finished making because it hasn't quite set. After warning several different couples sitting on the sink who look at her as if she's crazy because she's warning of a catastrophe, one couple starts jumping on it, they break the sink and the pipes and the water starts gushing out. This, then, is the Flood moment. It is too much even for Him who has been ignoring Mother's warnings. The house is emptied, Mother does repairs. She gets pregnant, Him gets a new idea. Minutes after he's finished his new work – a sheet of paper on which, I guess, you can just about fit the Ten Commandments - his publisher and publicist arrive, followed closely by his fans that start filing into the house. These new humans are more pernicious than the first family and their friends who had invaded the house and start stealing bits of the building. Mother, once again, tries in vain to stop them. The crowd gets crazier. They start treating Him as a deity and also tearing bits of the house to take away as mementos, breaking down walls. 'What are you doing?' shouts a very pregnant Mother, clearly a stand in for Mother Earth aghast at what humans are doing to the beautiful thing she created. But Aronofsky must have even more metaphors piled up on Lawrence's character. She gives birth, Him takes the baby to his "fans" who have been waiting to see the boy, and the poor baby gets, well… Aronofsky gives us a literal interpretation of the Catholic ritual of transubstantiation.

Much more madness follows, but I feel I need to see an imam, rabbi or priest to get the rest of the metaphors without losing my wits or commit a deadly sin. This is, by far, the most religious film I have ever seen, asking the most fundamental questions about creed. Watch "Mother!" But don't forget to book an appointment with your clergyman of choice to discuss the finer points that Aronofsky is trying to get across.