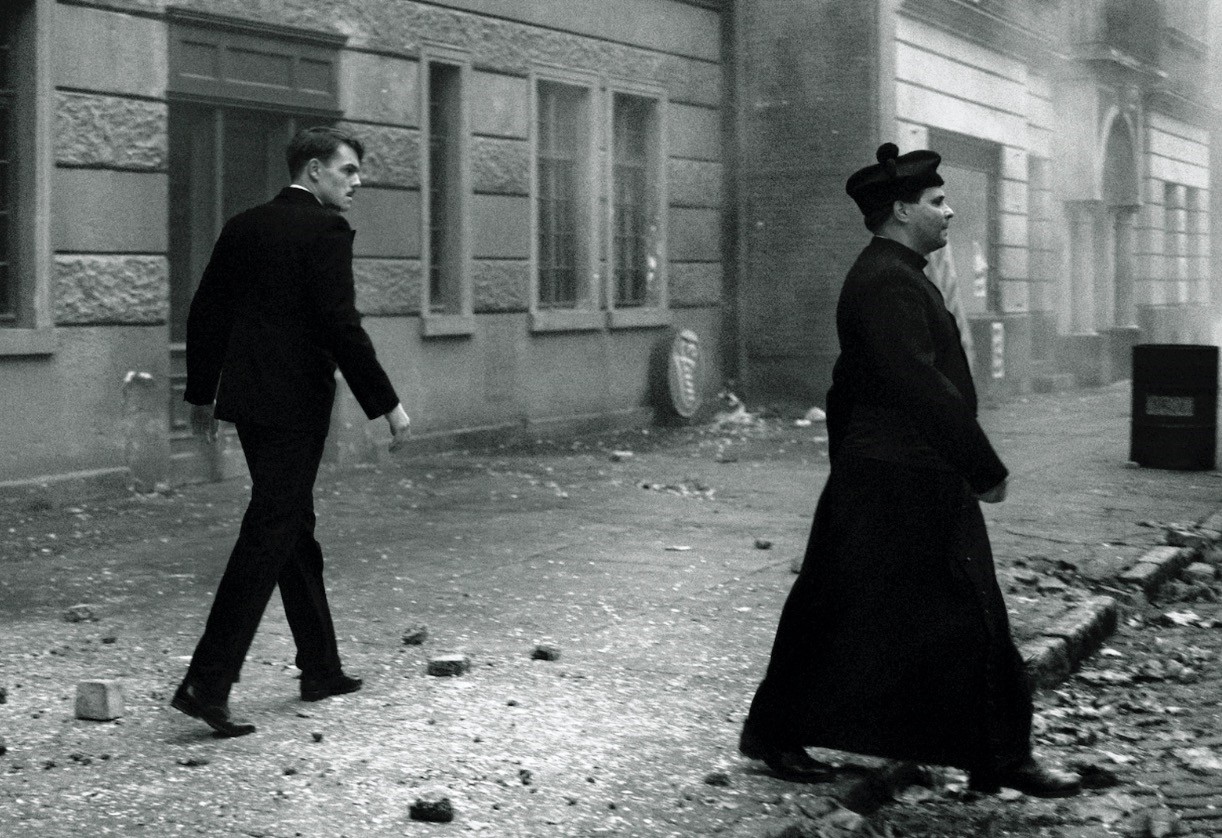 For one of the highest-profile exhibitions of the year in Istanbul, art film director and writer Julian Rosefeldt makes his debut on the shores of the Bosporus with the exhibition "Avant-Garde and Apocalypse" at both Dirimart locations in Dolapdere and Nişantaşı through June 13

Julian Rosefeldt looked at a blank piece of paper. His mind may have been running with images, thoughts, projections, but he did not intend to record them, not exactly. He did not intend anything in fact, nothing in particular.

Instead, he wrote on the page to practice a technique known to have inspired the maiden ventures of his predecessors who rode the first wave of surrealist filmmaking. He followed the methodical madness of his intellectual forebears Luis Bunuel and Salvador Dali by partaking in automatic writing.

It is a creative method that goes deeper than the stream-of-consciousness prose style that developed into a literary genre with Virginia Woolf's reclusive feminism, Jack Kerouac's speed-induced scrolls, and lately Mathias Enard's novel-length sentences. It confronts the unsettling and revealing powers of the subconscious, and opens to what the psychologist Carl Jung called the collective unconscious.

What came out under the eye of Rosefeldt was gold. And that is partly the title of his earliest film shown for his first solo exhibition in Istanbul, an 18-minute, black-and-white amoral romp of Rabelaisian human satire called "Deep Gold" (2013-14).

The surrealist masterpiece, L'Age D'Or (1930) by Bunuel and Dali begins like a documentary about scorpions. Its dark, entomological focus is akin to the experimental video artist Ali Mahmut Demirel, who is currently exhibiting "Isle" at Arter's third-floor gallery on İstiklal Avenue in Istanbul's historic, commercial core through July 15. In his unpeopled flash of cinematic genius, "The Pier" (2015), he zones in on a mosquito against dirty glass overlooking the foamy churn of the gray ocean below. His transcendental narrative sensibility is in some ways parallel to Rosefeldt, an artist of the moving image who has the eye of a feature filmmaker, although they diverge when it comes to exposition and influence.

No one with the faculty of sight and a sound mind should trust Rosefeldt. In one word, "Deep Gold" is counterintuitive. It is painful, wrenching, deceiving, captivating, enlightening. Finally, it is good, artistic fun. To say creative is an understatement. He is visionary, reviving a time when film was new media, as its chief seers and eager onlookers were mesmerized by it as a potential means to break the conventions of prevailing formalisms. 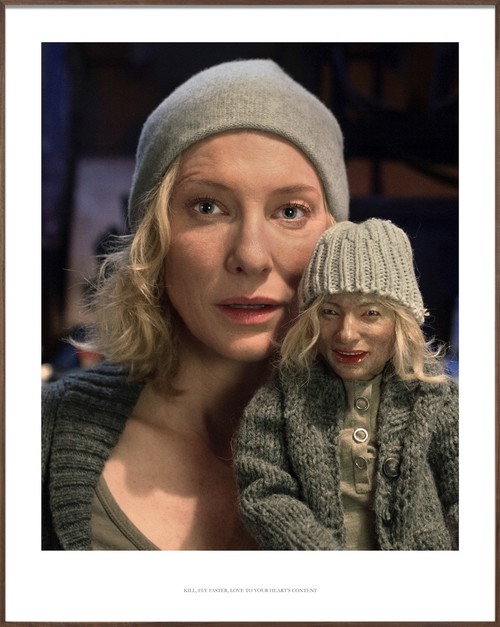 To its immediate initiates, the technical capabilities of film sprung a leak in the Kool-Aid punch bowl of so many art movements doomed to the dogmas of conceptualism and obscurity. It could both reach the masses and chart a way forward through the multifaceted aesthetics of modernity and futurism at a breakneck clip. It is clear that Rosefeldt aligned his work with that seed momentum that was soon coopted by the viral world order of capitalism, sold to the melodramas of domestic Hollywood dreams.

Dali makes a cameo appearance in "Deep Gold" as he reads from a rag named after Gala, his beloved, and stares back at the subject of the film with his iconic, beaming stare. Even the diviner is not immune to the shock that follows from truly seeing into the glass ball with unflinching eyes. It climaxes in a vaudevillian burlesque show as ribald as that filmed to reconstruct the theatrical protest of the 17th century poet John Wilmot, played by Johnny Depp in the 2004 movie, "Libertine."

A picture of human world

"I've been in Istanbul before, but this time I'm mainly working. I like Istanbul a lot. 'In the Land of Drought' (2015-17) was shot in the Atlas Mountains where a lot of film sets are left. That makes them very beautiful. They are not actually ancient ruins," said Rosefeldt as he stood outside of Dirimart's space in Dolapdere minutes before his first opening in the city, eyeing the rush of traffic on his way to the Nişantaşı where "Deep Gold" is screened. "I discovered the sets accidentally on an excursion with my students, and much later I wanted to do a piece on the anthropocene and thought that this could be an interesting way of telling my perspective."

The gleaming desert has an extraterrestrial quality in Rosefeldt's longest and most recent film for the Dirimart exhibition, "In the Land of Drought" curated by Heinz Peter Schwerfel into a vast projection. Its sheer, ecological scale is contrasted by crawling dots of white suits, humanoids after some unexplained fallout, as they file in and out of the frame like an investigative team descended from space.

The slow-moving, 43-minute film recalls Ron Fricke's "Baraka" and Godfrey Reggio's "Koyaanisqatsi" as it muses on the nature of the world soul from a global perspective, conveying the cataclysmic wonder of creation as a force with so much energy that it simply self-destructs while simultaneously regenerating through unknowable paths of singularity. The artists of the world distill that essential quality from life and communicate its active principles.

"When you work on film there's always post-production, such as working a bit on the colors of the Moroccan and German landscapes [for 'In the Land of Drought']. There was no digital enhancement," Rosefeldt patiently explained with a philosophical mind as quick and sharp as a skilled fencer. "The audience completes the work. The movie context comes along with perception patterns. You approach the moving image differently than in the art context, where everything is possible and you never know what's waiting for you. In the movie context you're waiting for a story to be told. Most of my work is shown in museums, and not in cinemas. I like to explore the mechanics and alchemy of filmmaking and I have more freedom in the art world." 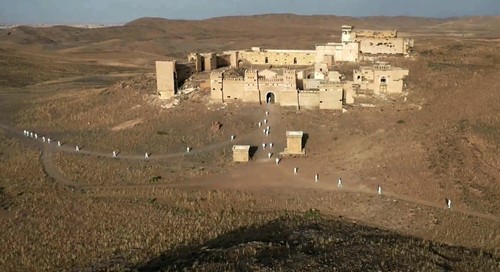 Reams have been written, and uncountable bytes of memory used to clarify and pontificate on the significance and meaning of Rosefeldt's career. His piece, "Asylum" (2001/2001) displays his knack for cutting metaphors by an indirect critique on German immigration, in which Turkish men work in a newspaper delivery warehouse and are increasingly locked in a wind tunnel that blows every last page into total disarray.

In a similar light, "In the Land of Drought" shows the fragility and shallowness of human civilization against the transience of time, where seemingly impressive Egyptian temples and Greco-Roman colonnades are mere paper-thin scaffolds of half-constructed, make-believe figments of reality. The same device recurred in "Deep Gold" as a possible homage to the surrealist Mexican film, "The Holy Mountain" (1973), which also ends with the nightmarish dystopia unveiled, as the camera lets its viewers take a concluding, awakening sigh of relief behind the scenes.

In the second half of "In the Land of Drought" the aerial lens espies the moonscapes of an industrial catastrophe, reminiscent of how photographer Louis Helbig saw the Canadian oil sands from a purely aesthetic perspective. The white suits weave through the remnants of life belittled to smeared concrete and a crisscross of tire tracks over the infertile sand of an open-pit mine. The colossal ingenuity of the ancients is concentrated into modes of environmental destruction, the war machine complex zigzagging into towering, outdoor stairwells wound through the rusted pipes of smoking factories.

Noise music rises like the grind of metal against glass, as a vocal synthesizer harmonizes to a droning machine before silencing to the flap of a bird's wing. The film ends with its post-apocalyptic walkers forming a circle before they bunch together into a dot around a structure that looks like an amphitheater, but is likely a sort of well for toxic runoff. The repetitive visualization of human bodies in and out of dissolution and unity relays the cosmic design of creation and destruction.

A farce on manifestos

On a black couch in Dirimart's gallery in Dolapdere, there are three pairs of headphones in front of a flat monitor. Rosefeldt's film, "Manifesto" (2015) is on repeat. It is a piece that merges art and cinema with unprecedented direction, breaching the realm of art, also catapulting it to new heights.

"Manifesto" is a scintillating magnum opus starring the prolific talent Cate Blanchette in thirteen roles. Her comic timing is priceless and on point as she enunciates the absurd and insane verbosity of art's most vocal and outlandish of proposals. She recites manifestos by the Dadaists, Communists, Situationists, and ten others, through a delicious variety of characters, mediums, acts, interventions and displacements.

Rosefeldt's generous cinematography and tasteful screenplay airs the infamies of modern and contemporary art's enduring failure to connect with most people. He embraces that confusion and repositions it for popular appeal under a more democratic light.

Art is not going anywhere. It was here when people lived in caves. It will conceivably be here after humanity has made its grand exit. Art reflects life, its enigma.