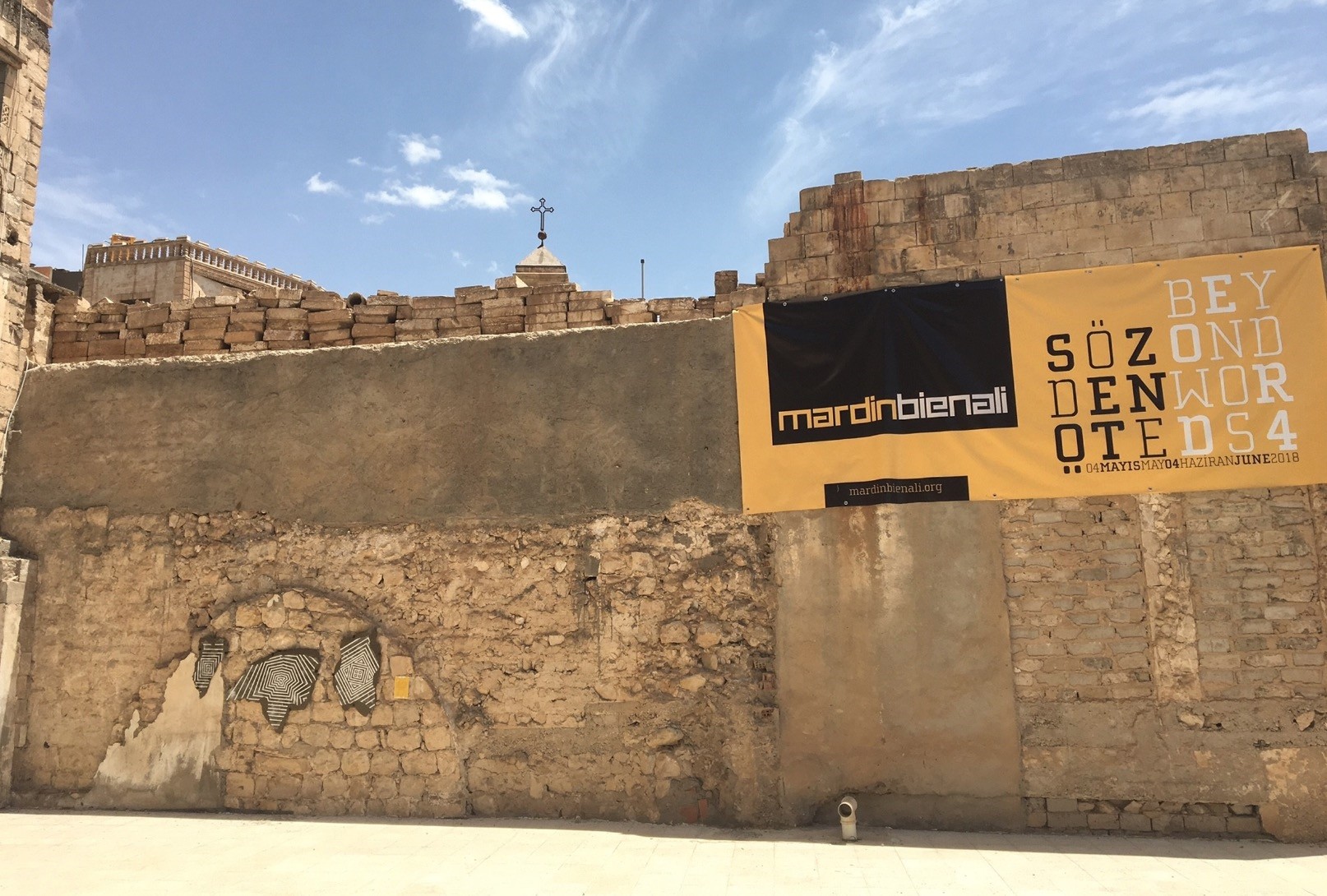 The 4th Mardin Biennial is themed u201cBeyond Wordsu201d and shows works from international and regional artists like Hasan Pehlevan from Silvan
by Matt Hanson Jun 02, 2018 12:00 am

The seduction of the 4th Mardin Biennial is, as always, the city itself. The intricately engraved, pointed archways and golden stonework of Artuqid architecture descends below a hilltop castle overlooking the geological shift where Anatolian highland meets Mesopotamian plain

The howling sky roars over the tarmac touched with burning phoenixes yearning for a sight of moonlit stone and eastern sunlight. Heaven has fallen to whip green faces with the dry air, cleansing them of memory and home, as they traverse the prehistoric grain fields where civilization began, and climb the steep, exposed quarries that lead to the apex of its mining, toward the storied city of Mardin.

Inside its solemn Assyrian haunts storytellers chant in a nearly extinct Neo-Aramaic language neighboring Chaldean symbols, conversing in Arabic and Kurdish against an urban sea of dark red wines that overflow along the main drag lined and twisting with nine historic venues, often half-preserved and all-but-abandoned, opened for locals and ramblers to gape with sore jaws and misty eyes into new visions of art.

Patient seekers are led to voyage through the psychological spaces where lost time and environmental transformation confronts the all-encompassing presence of human resilience as sheer as the cliff that rises with a dense mass of ancient dwellings.

Fifty artists from around the world converged to capture themes instilled by the collective mind of curators Fırat Arapoğlu, Nazlı Gürlek, and Derya Yücel to go "Beyond Words."

It opens into what the American author Hakim Bey called a temporary, autonomous zone, a creative ecosystem sustaining alternate dimensions where experienced reality and remembered history bend over backward like the immense Mesopotamian flatland atop the curved planet to reveal a horizon unseen, cast in the fog of tragedy behind its white curtain of haze to Syria, awaiting thunderous lightning showers amid constant winds that drown reason in the ecstatic inspiration of the moment under the mask of the muse.

In the Orientalist romance, "The English Patient" by Michael Ondaatje, the enigmatic leading man woos his reluctant temptress while taking shelter inside a jeep during a raging sandstorm in the middle of the Sahara Desert. 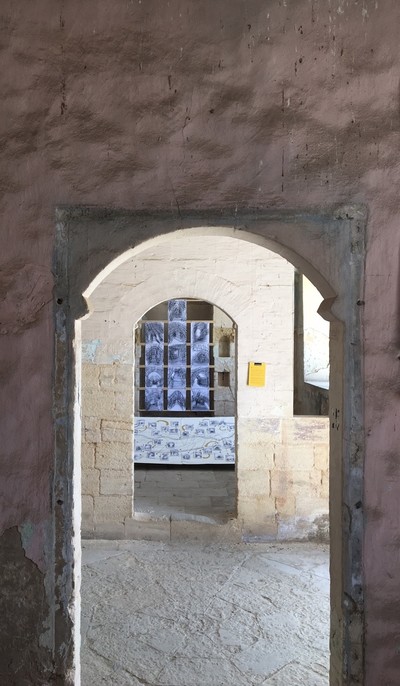 The artist Çağrı Saray mused on the Abbara, a central architectural feature of Mardin's Artuqid aesthetic, for his installations in a video work and extensive drawings throughout the multilevel WWI-era German Headquarters.

He does so by citing the many winds that storm throughout the region, enunciating local names and the legends that accompany with guttural words that roll from his tongue like exotic delicacies, sweetening her ears and lulling them both to sleep in the eye of a deadly storm. He speaks of eternal winds, and other gusts more pathless and transient, subject to the directionless whims of the open plain, as over the mythically fertile soil of Mesopotamia, bordered by the Anatolia plateaus above and the infinite deserts below.

It is there where the scorching permanence of the "aref" blows from Syria in the south to meet the feared currents of the "samiel" from Turkey, said to carry a poisonous air so potent that it was equally coveted ally and formidable opponent on the battlefront, while loyal only to its vast, encircling power.

Such was a logic that escaped the Germans, couched in the forests of Europe until they sided with the Ottoman Empire in World War I and by 1917 had set up shop in the 19th century İskender Atamayan Mansion on the central thoroughfare through Mardin, where Mustafa Kemal Pasha also garrisoned.

Now, a casual walker through its confines will stumble over bare rock walls, dust-strewn floors, the skeleton of a building run through

with exposed electricity cables that act like visible hints for scavenging hunters following the tail of the white rabbit into hallways shrouded in darkness, and finally the glare of a video screen.

"Infinite Distance" (2018) by Çağrı Saray is an immediate reflection of the roads taken in Mardin, mostly on foot through its labyrinthine wormhole of stairs that seem hewn by hand from builders centuries past, as an ambient noise effect moves the fading clips to the ominous sounds of a deep sonic rush and a slow hammering onto the omnipresent stone. His focus is on the architectural feature known as the Abbara, an integral piece of the puzzle that is the mineral megalith of the city in its unified entirety. 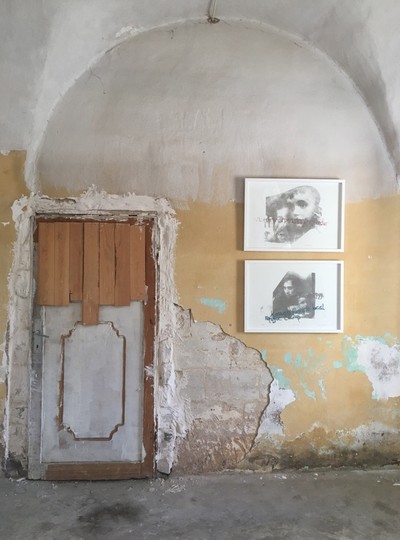 One of the most powerful installations at the 4th Mardin Biennial is the silkscreen "KOSOVo" (2010) series and artist book "Farewell My Homeland" (2004-2005) by ‹pek Duben at the Mor Efrem Monastery.

Splayed throughout some four stories of dereliction and disintegration, one of the more calculated subjects is "Smokeless Air Space" (2018) by İnsel İnal, in the style of a documentary sympathetic to the life of multigenerational tobacco farmers in the Gurs Valley of Kızıltepe southwest from the city of Mardin.

In the span of three years he produced the piece after simply listening to a young man who offered him a cigarette. That most basic gesture spurred him to see his village, to record the changing traditions of manual labor that had been passed down for generations.

As part of the installation, fiery neon-red words read, "My Head" and "My Eye" in Turkish, placed on stacks of dried tobacco leaves still fresh with the scent of its raw, unprocessed form.

Another piece at the Biennial, shown at the ramshackle Mor Efrem Monastery, is titled "Why Look at Animals? Agrimika" (2015) by the Greek artist Maria Papadimitrou. It grasps at similar motifs, only in the context of the dying leather industry from the perspective of one of its last lifelong technicians in the city of Volos.

There is a thick must of nostalgia that wafts from the worn mugs of old men whose vacant stares speak of the multifaceted interrelationship between work and mortality, which together take on bold, fresh meaning when exhibited in places that barely exist, fractured and lingering with forgotten pasts.

The tongue as body language

"My work is about body politics, exploring the body both as a site of regulation subjected to systemic regimes and ways in which it sets itself free. I am a curator who likes to bring art to people in places that are not necessarily designated as art spaces. We brought very complicated installation and video pieces to Mardin. Consequently in the complete absence of real supporting technical infrastructure we curators worked hands on to install the pieces together with one electrician and a small team of young helpers," wrote curator Nazlı Gürlek via personal correspondence as she reflected on the biennial month, which ends on June 4.

"Mardin gives the opportunity to think outside of the box, outside of the established art institutions, and to invent new creative ways to reach audiences. Considering Mardin's multi-cultural, multi-linguistic and multi-layered history and daily life, I suggest that due attention be given to the language of the human body as a common denominator and the most truthful, sincere, and direct form of expression. The physical, spiritual, symbolic, and instinctive aspects of the body can be invested in as possible strategies of empowerment."

There is a powerful aesthetic dialogue at play between the multimedia installations and the historic architecture. Hasan Tur's "Memory as Resistance" (2017) is projected onto chipped and peeling walls, the interior decay at the Mor Efrem Monastery, which makes for an ambient complement to the piece itself, a three-and-a-half hour exercise in repetitious minimalism, crumpling and smoothing pictures of assassinated journalists into a deliberate meditation on subversive remembrance.

And around the corner, Seyhun Topuz freezes the ordeal into the present tense for her abstract sculptures, "Crumpled up Paper" (2017), curated to furnish the empty, long-condemned holy sanctum.

Back at the German Headquarters, the cartoonist Ramize Erer created "To Peace" (2018) suspended along walls discolored with patches of rotted paint for a common palette that is eerily similar to hers. Hasan Pehlevan's interventions are akin to Mardin's stony, illusive foreground while the paintings of Mahmut Celayir reveal the inner psyche of its supernatural magnetism.

"Artworks such as those by Senem Gökçe Oğultekin featuring two dancers at the historical town of Ani [Dun (Home), 2018], a water ritual at Hasankeyf in praise of peace and nature by Fırat Bingöl [O Water, 2017] and inscriptions of artist Ana Mendieta's body in the Cuban landscape transformed by the basic elements of nature such as fire, earth, air, and water [Birth, 1981], can help us imagine new ways of responding to the diversity of issues of urgency within the social framework. We currently live in a global world order composed of conflicting local-global dynamics, where single viewpoints have long lost their dominance and diversity has become the new norm," wrote Gürlek, whose sensitivity to the greater social context only strengthens her curatorial statements.

"Mardin and its biennial must be seen within this broad global perspective. The unique quality of this biennial among all the worlds' biennials is its political and cultural location enclosing so much beauty, conflict and pain. It stands out as an Anatolian contemporary art event taking place in a small town in the southeastern region of modern Turkey overlooking the fertile plains of ancient Mesopotamia, just 21 kilometers from the border with Syria and the entire Middle Eastern region beyond it; a land of deep-rooted madrasas, mosques, monasteries and churches."