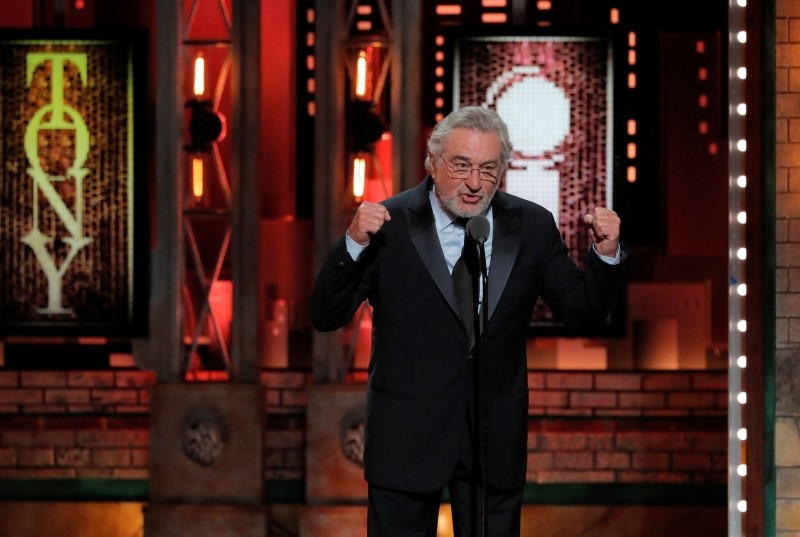 Hollywood megastar Robert De Niro got a standing ovation at the Tony Awards for using an expletive to condemn U.S. President Donald Trump.

The Oscar-winning De Niro, 74, was at the annual event for the top US theater awards late Sunday to introduce a performance from rock legend Bruce Springsteen.

The CBS television network, which was broadcasting the event live but with a delay of a few seconds, bleeped out De Niro's expletive.

Iconic actor Robert De Niro bluntly expresses exactly what many around the world - from G-7 leaders to environmentalists and human rights advocates - think about US President Trump, but unfortunately does it in front of millions of Americanshttps://t.co/cAaK4z4pZb pic.twitter.com/Dqw3zwrZaH

The actor then got on with his introduction, praising Springsteen for the singer's political activism.

"Bruce, you can rock the house like nobody else," said De Niro. "Even more important in these perilous times, you rock the vote. Always fighting for, in your own words, truth, transparency, and integrity in government. Boy, do we need that now."

The legendary actor urged the audience to vote in November and lauded Springsteen for his own political commitment before the singer sat at a piano for a moving performance based on his "Springsteen on Broadway" show that had him singing his classic hit, "My Hometown."

It was hardly the first time that De Niro, who was born in New York and lives in the city, attacked fellow New Yorker Trump.

In 2016, when Trump was the Republican presidential candidate, De Niro slammed him as "blatantly stupid," "totally nuts" and an "idiot."

The anti-Trump sentiment swept backstage as playwright Tony Kushner and others from "Angels in America" spoke to reporters about its three big wins: best play revival and acting trophies for Andrew Garfield and Nathan Lane.

"I agree," Kushner said when asked about the De Niro moment, dropping an F-bomb of his own in relation to the president.

"I can't believe De Niro did that," Kushner said. "Good for him. I mean, it's Robert De Niro. Who's gonna argue with him?"

Kushner went even further, calling Trump's presidency "the Hitler mistake" that put a "borderline psychotic narcissist in the White House."

"That was the best part of the whole evening!" commented actor John Leguizamo later that night at the Plaza Hotel after-party. "I jumped to my feet." He added that "the Tonys have never been this political."

Leguizamo himself, accepting a special Tony, brought up the fate of immigrant children in detention centers and the deaths of thousands of Puerto Ricans in Hurricane Maria. He also declared, "I'm an immigrant, and I'm not an animal" — referring to Trump's recent remarks that some people living in a country illegally or without legal permission are "animals."

"Mr. De Niro's comments were unscripted and unexpected," CBS said in a statement. "The offensive language was deleted from the broadcast."

The White House did not immediately return a request for comment.

The Tony Awards show was seen by some six million Americans last year.

'The Band's Visit' dances away with a leading 10 Tony Awards

The American, grown-up musical "The Band's Visit" outmuscled the acclaimed and sprawling British import "Harry Potter and the Cursed Child" for the most Tony Awards on Sunday, capturing 10 statuettes, including best musical, on a night where the theme of acceptance flowed through the telecast.

"The Band's Visit" is based on a 2007 Israeli film of the same name and centers on members of an Egyptian police orchestra booked to play a concert at an Israeli city who accidentally end up in the wrong town. Its embrace of foreign cultures working together found a sweet spot with Tony voters.

"In 'The Band's Visit,' music gives people hope and makes borders disappear," producer Orin Wolf said upon accepting the best new musical crown, saying it offers a message of unity in a world that "more and more seems bent on amplifying our differences."

Tony Shalhoub, the "Monk" star who won as best leading man in a musical for his work on "The Band's Visit," connected the win to his father's 1920 immigration from Lebanon to New York's Ellis Island at age 8. "Tonight, I celebrate him and all of those in his family who journeyed before him and with him and after him," he said.

The show's Katrina Lenk, who won best actress in a musical, said the production "filled her stupid little heart with so much joy." She dedicated her award in part to the iconic Egyptian singer Umm Kulthum.

"The Band's Visit" also won statuettes for best direction, orchestration, sound design, best book and score, lighting and featured actor Ari'el Stachel, who gave a heartfelt speech about his past.

"For so many years of my life I pretended I was not a Middle Eastern person," he said, addressing his parents in the audience. He thanked the creators of the show "for being courageous for telling a small story about Arabs and Israelis getting along at a time that we need that more than ever."

The show's director, David Cromer, said the musical is also about loneliness and despair, and asked everyone to reach out to anyone for whom "despair is overwhelming."

The two-part spectacle "Harry Potter and the Cursed Child" captured six Tonys, including best play, book, lighting, sound design, orchestrations and director for John Tiffany, who asked the crowd to sing "Happy Birthday" to his boyfriend. They obliged.

Kushner took the stage and pointed out there were 21 weeks until the midterm elections in the United States: "Twenty-one weeks to save our democracy, to heal our country and to heal our planet."

Garfield won his first Tony, for best leading actor in a play, and dedicated the win to the LGBTQ community, who he said fought and died for the right to love. He said the play is a rejection of bigotry, shame and oppression.

"We are all sacred and we all belong," Garfield said. He then referenced last week's U.S. Supreme Court decision which ruled in favor of a baker's right to deny a gay couple a wedding cake based on his beliefs.

"(Let's) just bake a cake for everyone who wants a cake to be baked," he said, to rousing applause. Lane, who won for best featured actor in a play, said "Angels" still speaks to society in the midst of "political insanity."

In one of the ceremony's most mesmerizing moments, Melody Herzfeld, the heroic drama teacher who nurtured many of the young people demanding change following the February school shooting in Parkland, Florida, was honored from the Tony Award stage.

She then later encouraged many of her pupils to lead the nationwide movement for gun reform. Members of Herzfeld's drama department took to the Tony stage to serenade her with "Seasons of Love" from the musical "Rent."

In other wins, 82-year-old Glenda Jackson added to her impressive resume with a Tony Award for best actress in a play for her work in a revival of Edward Albee's "Three Tall Women." That show also yielded the featured actress win to "Rosanne" star Laurie Metcalf.

Billy Joel gave his friend Bruce Springsteen a special Tony Award. "This is deeply appreciated, and thanks for making me feel so welcome on your block," The Boss said. Later, Springsteen performed "My Hometown" on the piano from his sold-out one-man show, "Springsteen on Broadway." (De Niro, who took the stage to introduce Springsteen's performance, started off with an expletive directed at President Donald Trump, which garnered him a sustained standing ovation from the crowd.)

Co-hosts Josh Groban and Sara Bareilles, talented and likable if not terribly thrilling, made somewhat subdued hosts, opening the show with a self-parodying duet on piano for all the losers out there — including them. "Let's not forget that 90 percent of us leave empty-handed tonight. So this is for the people who lose," they sang.

They went on to cover Sia's "Chandelier" — substituting her lyrics for ones that complained about singing live eight shows a week — and sang hits from Andrew Lloyd Webber shows and then closed the telecast with a song about Broadway dreamers.

The revival of "Carousel" won two awards — choreography and for Lindsay Mendez, who won best featured actress in a musical. She accepted in tears, recounting that when she moved to New York, she was told to change her last name to Matthews or she wouldn't work. She said she was happy to be in a production that "celebrates diversity and individuality." To all artists out there, she said: "Just be your true self and the world will take note."

Another show highlight was the lively performance by the cast of "Once on This Island" that included a sand-filled beach, real water and a goat. Onstage guests were volunteers and staffers from three organizations that bring relief to areas impacted by natural disasters. The show went on to win best musical revival, in an upset, beating "My Fair Lady" and "Carousel."