The Turkish Film Festival, which aims to contribute to economic and cultural exchange between Turkish and German society through the art of cinema, introduces the best examples of Turkish cinema to a large audience in Germany. The festival will be held for 18th times between Oct. 14 and Oct. 19 this year.

The opening ceremony of the 18th Frankfurt International Turkish Film Festival was held with the participation of the festival's founder and Chairman Hüseyin Sıtkı, TURKSAK Foundation Chairman of the Board of Directors, Fehmi Yaşar, Festival Coordinator Serap Gedik, Jury President Ezel Akay and a large number of press members. The movies that will compete in the "Turkish Film Competition from the Point of View of German Filmmakers" have been selected by the jury president including Turkish director Ezel Akay, producer/director Gani Müjde, producer Şükrü Atasever, actor Hakan Bilgin and film editor Çiçek Kahraman. 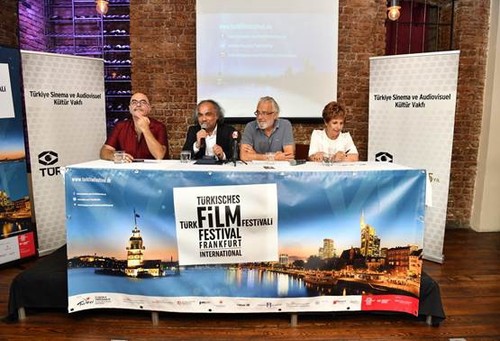 Actresses looking to win at the festival include Başak Köklükaya, Tuğçe Altuğ, Hazar Ergüçlü, Algı Eke and İpek Turkan while the competitor actors are Yiğit Özşener, Doğu Demirkol, Tolga Tekin, Bartu Küçükçağlayan and Aytaç Uşun. Furthermore, the festival will give out an award for the best soundtrack. The soundtrack of "Taksim Hold'em" prepared by Micheal Önder, "Ölümlü Dünya" prepared by Murat Çekem, Ozan Tügen and Deniz Doğançay, "Kelebekler" prepared by Ahmet Kenan Bilgiç, and "Körfez" prepared by Ekin Üzeltüzenci will compete.

The Golden Apple Awards of the festival will be handed out for the seventh time this year. The winners will be announced at the closing ceremony after the nominees determined by the Turkish jury are evaluated by a jury of German filmmakers.

The winners of the "Lifetime Achievement and Loyalty Awards" at the 18th Frankfurt International Turkish Film Festival will also be announced.

As well as to Cezmi Baskın, the actor who won multiple awards for his performance in "Beynelmiel" ("International"), and appeared in many movies such as, "Hükümet Kadın" ("Strong Woman"), "Devrimden Sonra" ("After the Revolution"), "Vizontele," "Beyaz Melek" ("White Angel"), "Güneşi Gördüm (I Saw the Sun), "Neşeli Hayat" ("Fun Life"), "Organize İşler" ("Organized Business), "O da Beni Seviyor" ("She Loves Me Too"), "Düttürü Dünya" ("Skimpy World"), "Kahpe Bizans" ("Fickle Byzantine") and "Gora." The award will also go to Işıl Yücesoy, who graduated from Hacettepe University Ankara State Conservatory's acting department and then started working at the State Theater. The Loyalty Award will be presented to Cem Karakaya on behalf of his father, the theater and cinema actor Feridun Karakaya who was famous for his "Cilalı İbo" character in the 1960s and 1970s and who passed away in 2004.