Three Faces: The past, present and future of female characters 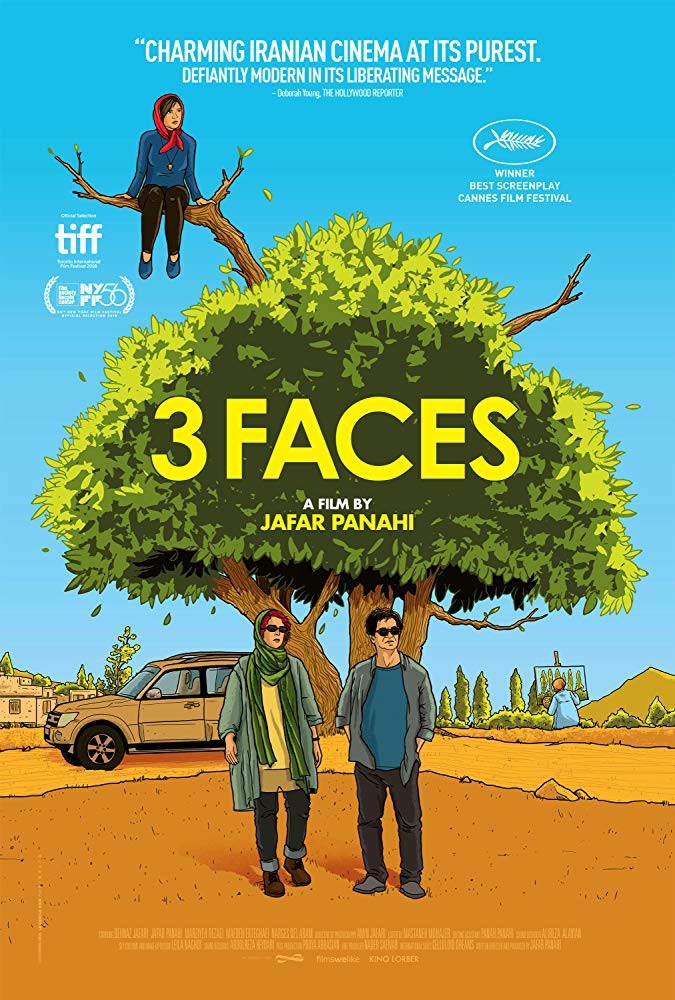 One of the most anticipated films this year, ‘Three Faces,' by Iranian new wave director Jafar Panahi was recently shown in the Antalya Film Festival, with lead actress Behnaz Jafari and cinematographer Amin Jafari in attendance

The 55th Antalya Film Festival has brought a decent selection of competing films, including successful examples from the Middle East. When Middle Eastern cinema is mentioned, undoubtedly, Iranian cinema is a cornerstone. One of the most acclaimed directors of Iranian descent is Jafar Panahi, who has gained cinema lovers' reverence, especially after the Golden Bear he won at the 65th Berlin Film Festival in 2015 for his film "Taxi." In the film, Panahi himself drives a taxi in Tehran streets and listens to people's stories, problems and worries. Panahi recently directed his fourth film since he was banned from shooting films by the authorities. The fourth film is "Se Rokh" ("Three Faces"), shown at this year's Antalya Film Festival.

The film opens with a suicide scene shot by a young girl named Marziyah, sent to a respected actress, Behnaz Jafari – playing herself – to find a helping hand. In the video, Marziyah says she has tried to reach her many times but could not. She says she wants to attend the conservatory, and her family promised to let her if she got engaged. She agreed, but after the engagement, her family let her down. Now, she has committed suicide by hanging herself in a cave. The footage shakes Behnaz, who blames herself while trying to understand if the video is a fake. She cannot stop thinking about the girl and sets off on a journey to the village where the video originated, accompanied by director Panahi, who calmly drives the car.

On their way to the Azeri village of Marziyah, they pass through other small villages on the road where they meet idiosyncratic locals who have unique ways of living. There is a language barrier in some villages between Azeri and Persian speakers. Though Panahi Bey, as he is called by the surrounding people, can speak Azeri, he is apparently more fluent in Persian. We witness values and traditions of the villages through Behnaz and Panahi's experiences. For instance, in one village, we see that circumcision means much more than anywhere else, as the circumcised piece should be buried in an important yard to safeguard a boy's brilliant future. In another example, in a village with very narrow roads, drivers communicate using horns to understand which one has the right of way. Thus, the director presents local cultures without judgment or comment – just as they are. This is one of the most distinctive characteristics of the director.

When they finally reach Marziyah's family home, they understand the gravity of the situation with Marziyah's brother's violent reaction that embarrasses the mother. After spending a few hours in the village, Marziyah appears and tries to explain why she resorted to such a fake plan; however, Behnaz suffers a nervous breakdown and hastily leaves, but returns shortly due to her conscience.

Marziyah and Behnaz visit an old singer and dancer, Shehrazad, who lives at the edge of the village, silently resenting professional artists who forgot her existence, especially after the revolution. Though we never see Shehrazad's face, we know there is a strong bond between these three generations of women.

The film is basically a road trip, employing close and long shots to create a kind of dizziness one would feel if travelling these kinds of paths in real life, making a striking impact on the audience and reinforcing the feeling of authenticity. Behnaz Jafari and cinematographer Amin Jafari participated in the screenings in Antalya. Behnaz played her people's reality in the film. She said it is very hard to handle. "It is the same in real life. People can put others in tough situations through phone calls or messages. I have a hard time dealing with it in my personal life, and I had a hard time acting it."

However, director Jafar Panahi opened a space for the cast and crew to express their ideas. "Everybody who took part in the film could express their ideas freely on Panahi's set," Behnaz Jafari said. Behnaz and the technical team behind the scenes are professional but all the other actors were amateurs.

Amin Jafari, the cinematographer, is well acquainted with the director, who sent him a scenario to read and give feedback. After reading it, Amin decided to be a part of the film. "We started to prepare a year before the shooting, thinking about which camera to use and where and how to shoot the film," Amin said.

Behnaz participated much later. "I started on the spot, directly on the set," she said.

Amin indicated that the script had almost no changes during the shoot, with almost 90 percent of the film matching the script.

"The more I watch the film, I get a better understanding of it and see that Panahi aimed to show the reality and the struggles of people trying to realize their dreams. This is just like how we set to shoot the film," Behnaz noted.

However, the shoot came with its own difficulties in the remote village. Long and close shots were hard due to the narrow, mountainous location. "Sometimes, we shot a particular scene for three days, maybe a week, again and again. Panahi is known for repeating scenes and later choosing the best. That is why we had to be organized for such difficult circumstances surrounding us," Amin said.

Multidimensional name of the film

It may be hard to understand what "Three Faces" refers to – maybe the faces of Panahi, Behnaz and Marziyah. However, a deeper meaning is that the film looks into the lives of three women, Behnaz, Marziyah and Shehrazad; thus, representing the past, present and the future," Behnaz and Amin Jafari concluded.