u201cSibelu201d tells the story of 25-year-old Sibel who struggles to survive in a conservative society despite all the oppression.
by Daily Sabah Nov 28, 2018 12:00 am

Hitting the road for the 24th time, Festival on Wheels is getting ready to bring this year's award-winning films of Turkish and international cinema, as well as films focusing on refugee problems, to Ankara, Kastamonu and Sinop provinces

Organized by the Ankara Cinema Association in cooperation with the Culture and Tourism Ministry, Festival on Wheels aims to present the latest pieces of Turkish cinema to spectators across the country. "Anons" ("The Announcement"), "Arada" ("In Between"), "Ev Kadını" ("Housewife"), "Kelebekler" (Butterflies"), "Paranın Kokusu" ("The Smell of Money") and "Sibel," are among the winning productions of the year, and will meet cinema lovers in Ankara, Sinop and Kastamonu between Nov. 30 and Dec. 13 with contributions of film crews.

In addition to the classical sections presented by the festival every year, this year's program also offers a selection entitled "Without Refuge" that approaches immigrant problems in various dimensions and with quite harsh discourses. 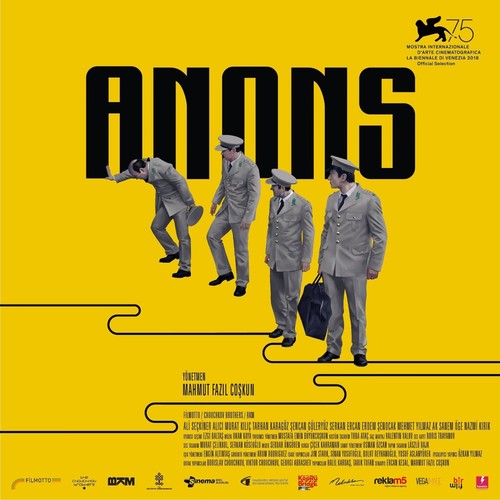 Set in 1963, the film "Anons" tells the story of four soldiers who attempt to stage a coup, thinking they would get the support of the public through a radio announcement.

The festival will be in Ankara between Nov. 30-Dec. 6, in Sinop between Dec. 7-9 and Kastamonu from Dec. 10-13. With content ranging from productions selected by famous directors and film critics to masterpieces that found appreciation much later after their release, in addition to experimental documentaries and short films, the event is ready to offer an unforgettable festival experience for cinema buffs.

The section "Turkey 2018," which presents the highlighted national films of the year, offers six films. "Anons," the third feature film of Mahmut Fazıl Coşkun, was given a Special Jury Prize at the Orizzonti (Horizons) Section of the Venice International Film Festival, which also hosted the film's world premiere. Set in 1963, the film tells the story of four soldiers who attempt to stage a coup, thinking they would get the support of the public through a radio announcement.

The fourth feature-length film by Ali Kemal Çınar, "Arada," focuses on the tragicomic story of Osman who understands but cannot speak Kurdish, his mother tongue, so instead answers questions in Turkish.

The second feature by Can Evrenol, "Ev Kadını" ("Housewife") tells the story of Holly, who cannot differentiate between nightmares and real life.

"Kelebekler" is the third feature film by Tolga Karaçelik. The film presents three siblings who do not get along well but set off on a journey to their village after getting a phone call from their father.

"Paranın Kokusu," the second feature-length film by Ahmet Boyacıoğlu, portrays the lives of taxi driver Mehmet, who live in the outskirts of Ankara, coffee house operator Metin and unemployed journalist Adnan. Starting as a suburban story, the film transforms in an unexpected direction and exposes striking observations on today's Turkey.

Having had its world premiere at Locarno Film Festival, "Sibel" tells the story of 25-year-old Sibel who lives in a Black Sea village with her sister and father. As the story of a young woman who struggles to survive in a conservative society despite all the oppression, "Sibel" is marked by its straightforward, striking language.

In the section "Without Refuge," spectators will be offered films that approach immigrant problems in various dimensions and with quite harsh discourse. Shown as the best documentary at Sundance Film Festival, "Of Fathers and Sons" focuses on the issues that leak into not just homelands but also into homes and families.

Telling the story of the border fence plan made by the Austrian government to prevent immigrants who struggle to enter the country illegally, "Die bauliche Massnahme" ("The Border Fence") is a political satire that exposes the absurd consequences of populist policies.

Winning for best documentary at the Tribeca Film Festival, "Island of the Hungry Ghosts" exposes the dilemma of a psychologist providing treatment at a refugee camp where the immigrants kept under surveillance start to lose their mental health.

"Otobüs, 1975" ("The Bus"), a Tunç Okan production, tells the dramatic story of nine Anatolians who set out to Sweden. The film is a masterpiece that naively exposes how capitalist societies, the nonsense that is called civilization, makes people selfish by alienating and transforming them into unmerciful, materialistic individuals. The film also portrays the desperation of provincial people before technology.

Offering examples of video art in addition to cinema, the 24th Festival on Wheels will also host a video exhibition that accompanies the "Without Refuge" selection in cooperation with the European Union Sivil Düşün (Think Civil) Program between Nov. 30 and Dec. 17. Consisting of 17 videos entitled "Welcome to Turkey," the exhibition will be displayed at Çankaya Municipality Contemporary Arts Center. The videos offer immigrants from various ages, genders and occupational groups a chance to tell audiences about the struggles they face in Turkey.

The "World Cinema" section will present the most popular films of the year as usual. The special section, which consists of the films selected by a figure from world cinema every year, hosts Mahmut Fazıl Coşkun this year. Titled "Invisible Cities," the section offers four classics from cinematic history selected by Coşkun.

Occupying a special place among the Turkish horror films canon, the horror films selection prepared by Can Evrenol will be presented to the taste of fans of the genre. When it comes to the "Independent Cinema" section, which was prepared in cooperation with the Il Cinema Ritrovato Film Festival famous for restored classics, spectators will be presented the restored copy of "Memorias del Subdesarrolo, 1968" ("Memories of Underdevelopment"), which is considered the number one classic of Cuban cinema. The Festival on Wheel's section that introduces contemporary artists to the festival's audience will host Didem Pekün with her two films this year under the title of "I want to feel." The section "Short is Good" offers the prominent short films of the year, while the children's films selection offers short animations sure to spark children's curiosity.