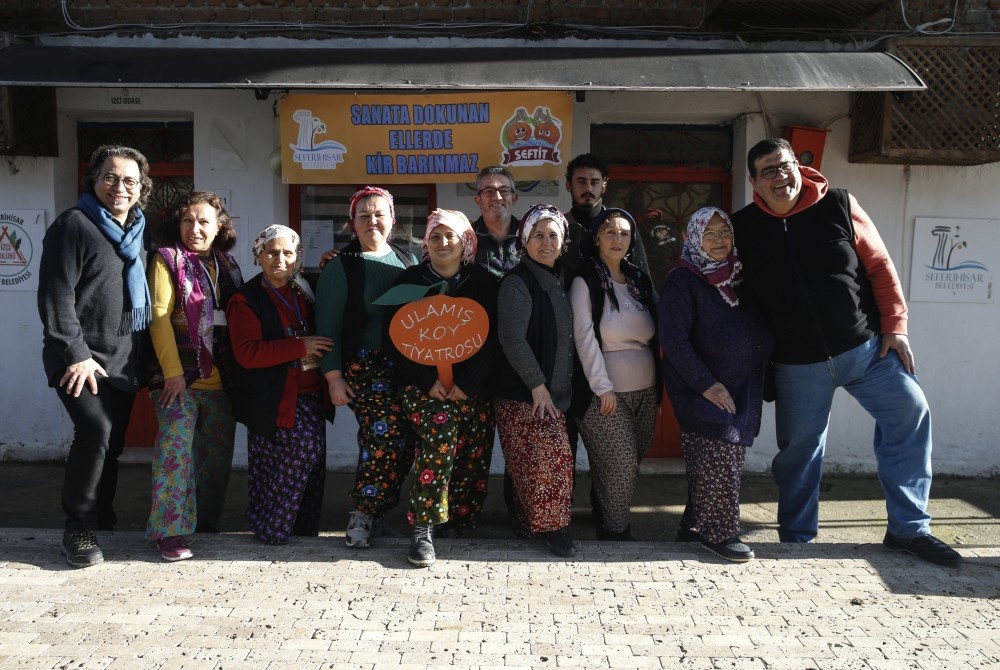 The theater group of 35, mostly women, with the eldest being 80 years old, received theatrical training whenever they found time from their daily chores and started writing a play.
by Anadolu Agency Jan 03, 2019 12:00 am

A short movie about the theater adventure of the villagers of Ulamış neighborhood in the İzmir region is included in the international film festival selections in Nigeria, Poland and the U.K.

The villagers, who make a living out of agriculture and livestock, took to the stage two years ago with the encouragement of theater actor and director Vedat Murat Güzel.

The theater group of 35, mostly women, with the eldest being 80 years old, received theatrical training whenever they found time from their daily chores and started writing a play.

The group took the stage with the play, "Yaşamın İçinden" ("Life from within") and performed throughout the country at various theater festivals. This theater adventure of the villagers was adapted as a short film by the 22-year-old Berkay Taşkan.

Taşkan returned to his village after graduating from the Department of Cinema at Akdeniz University and his short movie about the daily life of actors, their feelings about theater, their preparations for the play and their dialogues was selected by international festivals.

elimination at Lift-Off Sessions Festival in the U.K.

Achieving his dream in his village

Speaking to Anadolu Agency (AA), Taşkan, who turned the lives of Ulamış residents into a movie, noted that shooting a movie was his childhood dream.

He noted that he followed his dreams and returned to his village after completing his education on TV and cinema.

"I am engaged in farming and livestock breeding here. It's a profession from my dad. There is a studio-like environment here in terms of cinema. We wanted to reach the universal without compromising the intimacy and we managed this. We sent our movie to international festivals. It was shown at the African Smartphone, InShort and 6th Setem Bak Festivals. It first premiered at the İzmir Short Film Festival," added Taşkan.

He added that the sincerity of Ayşe Teyze, who represents the villages in Ulamış, was accepted by everyone and the character was loved by everyone. According to Taşkan, the movie unites people from different subcultures. "Hopefully, our adventure will continue at other places in the new festival season," Taşkan said.

Praise for the theater director

Director and actor Vedat Murat Güzel, who taught the villagers theater, noted that the average age of the actors was between 50 and 60 and that 80-year-old grandmothers also attended the training with their grandchildren.

The actors arrived at the theater after they completed their daily chores such as feeding their animals, gathering olives and opening up their market stalls. Güzel said that the passion for art shown by the villagers continued on the screen.

Emphasizing that they reached many places all around the world thanks to Berkay Taşkan, Güzel added, "He shot the movie with no budget. Opportunities were limited and we had to use sticks to anchor the camera. However, what he achieved was well received. He got positive responses from the festivals. We had the chance to make our name heard."