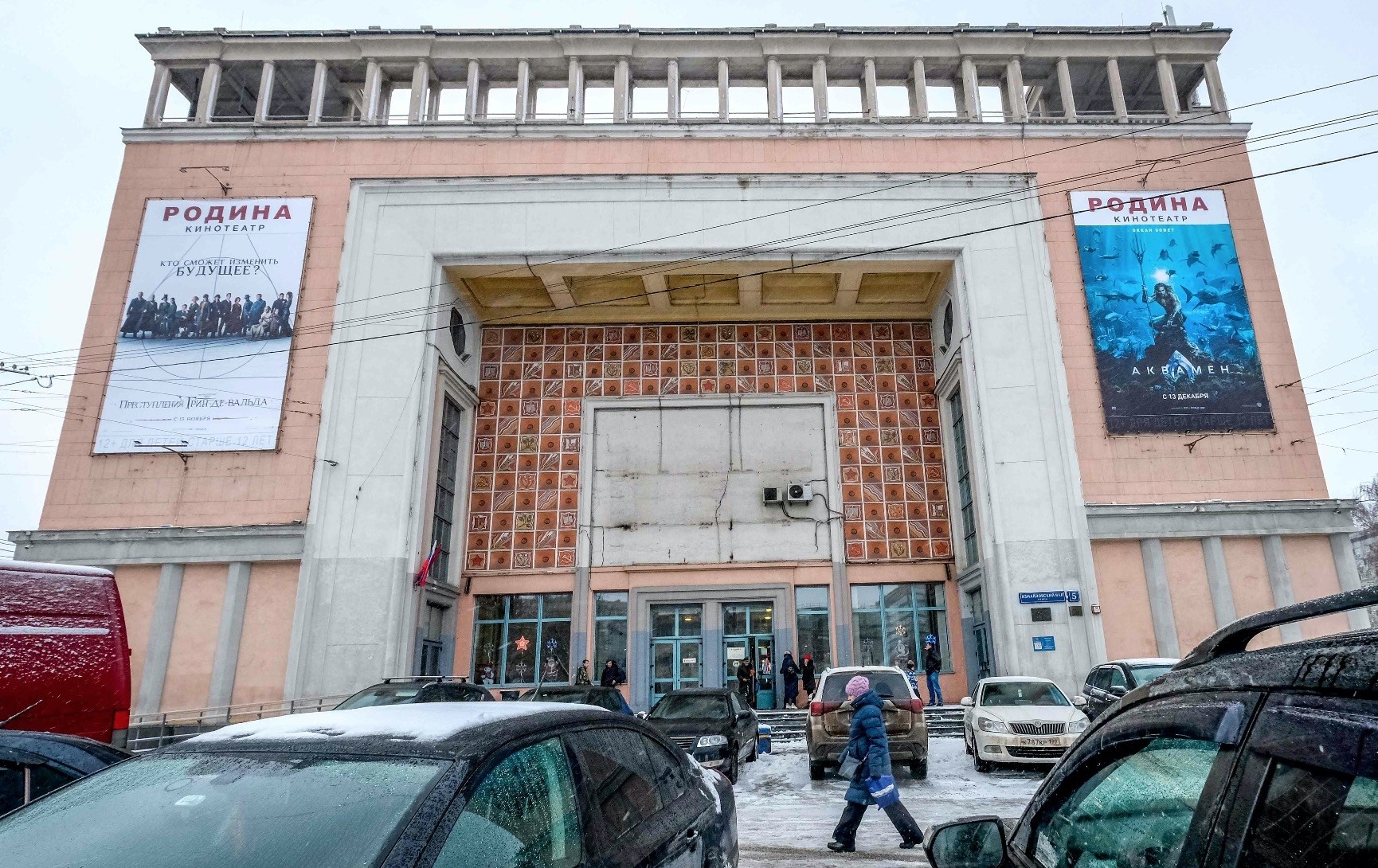 A view of the 1938 Rodina (Motherland) cinema, a Stalinist landmark in northern Moscow with huge pillars decorated with Soviet mosaics.
by Jan 09, 2019 12:00 am

Scattered throughout the city's outlying neighborhoods, Moscow's Soviet-era cinemas have for decades served as the center of communities.

With names like "Mars" and "The Diamond," the cinemas were mostly built in the 1960s and 70s during a Soviet film boom and were popular even after the collapse of the USSR, offering cheaper tickets than their counterparts in shopping centers. Now - as part of a wider plan changing the face of the Russian capital - almost 40 of them are being turned into modern glass complexes.

Developers say the project will brighten up dreary suburbs and bring more life to dormant residential districts. The plan is part of a major city redevelopment program led by Moscow Mayor Sergei Sobyanin that has included the construction of a multibillion-dollar park and the demolition of Soviet-era pre-fab apartments.

Real estate company ADG Group bought 39 Soviet-built cinemas from the government and plans to turn them into what it calls "neighborhood centers."

'There is nothing there'

Grigory Pechersky, ADG Group's founder and co-director, said the majority of the cinemas were in "extremely poor" condition when his company bought them in 2014.

"Around half of them were closed since the 1990s," he told Agence France-Presse (AFP) in the group's central Moscow office.

Pechersky said the project aims to "recreate the historical function of the cinemas, which is for residents to spend their free time comfortably."

All but three of the cinemas will be completely torn down and rebuilt. One of those surviving is the 1938 Rodina (Motherland) cinema, a Stalinist landmark in northeastern Moscow with huge pillars and Soviet mosaics, where ADG Group plans to reopen the building's original rooftop terrace.

The rest of the cinemas were built in the brutalist style - a utilitarian form of architecture popular in the Soviet Union in the second half of the 20th century.

Built in the shape of simple squares, some are on local high streets such as Almaz (The Diamond), a 1964 cinema painted turquoise in southern Moscow's leafy Shabolovka district.

Others - like the Angara, which is named after a Siberian river and already under reconstruction - are surrounded by typical late-Soviet housing blocks.

The group's main architect Alexei Belyakov said the cinemas will be reconstructed in a similar style, to form a recognizable "network" across the far-flung districts.

In drawings seen by AFP, they will all have a glass front and will be considerably larger, to make room for retail space and cafes.

All they will retain is the logos of their original names - taken from cities and rivers of the Soviet Union, planets, mountains and precious stones.

Belyakov said that while the cinemas "were built in the spirit of the time, they are not practical anymore."