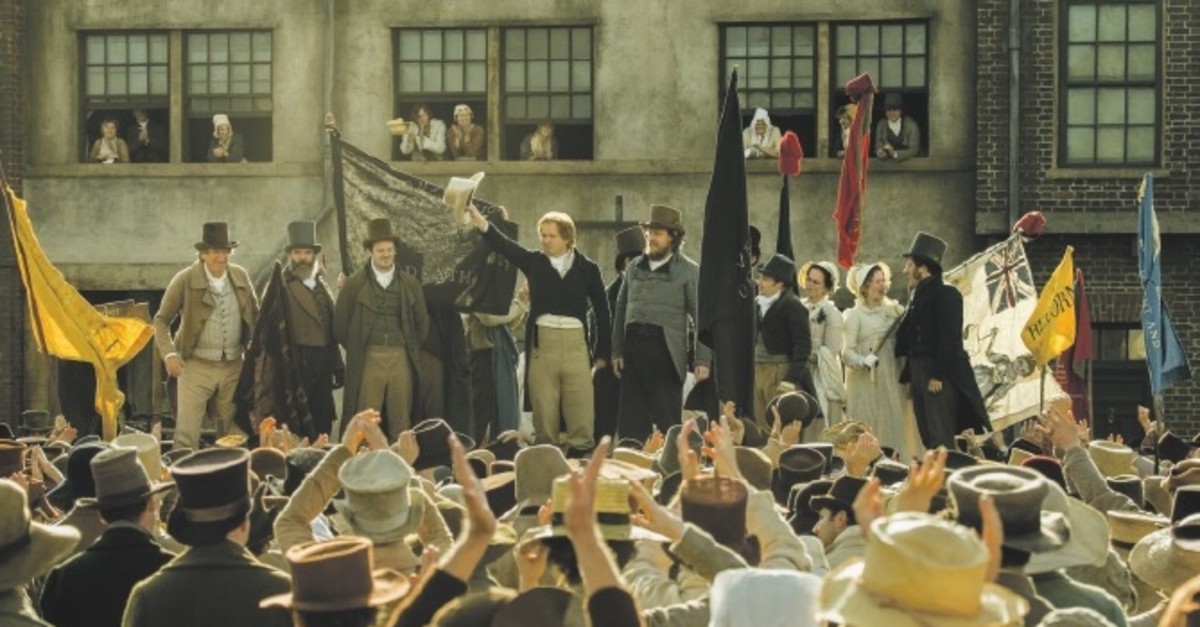 Mike Leighu2019s u201cPeterloou201d is a film about the massacre that took place in St. Peteru2019s Field in Manchester when the British Army charged into a public rally organized to ask for representation in the Parliament.
by Nagihan Haliloğlu May 15, 2019 12:03 am

In his latest film, Mike Leigh tackles one of the dark moments of British history, when a peaceful demonstration in Manchester was broken up by the police and the military. Leigh is forensic in his treatment of the story and offers a chastening history lesson

The last time I watched a historical account of a massacre on the screen with such a severe sense of foreboding must have been in 2002, in Paul Greengrass's "Bloody Sunday," about the 1972 shootings in Derry. Getting to know and sympathize with several characters in the knowledge that soon they will be killed in front of your very eyes isn't easy.

Mike Leigh's "Peterloo" is a film about the massacre that took place in St. Peter's Field in Manchester when the British Army charged into a public rally organized to ask for representation in the Parliament. For in 1815, Manchester, one of the most populous cities in the U.K., did not have any representatives in the law-making bodies of the country.

Since the Battle of Waterloo in 1815, the Brits have been naming catastrophes by adding the suffix - loo to the event concerned, despite the fact that the Brits and their allies actually won the day. It is upon the heels of this decisive victory against Napoleon - only four years later - that the British army was let loose upon the northern workers who had gathered in Manchester to protest for representation.

The film emphasizes the connection between these two acts of violence by following the story of a soldier, Joseph, who manages to return home from the continent shortly before what was to become "Peterloo." We see him approach his village through beautiful English scenery, prompting the viewer to ask why we can't all live in peace in this beautiful place that has been granted to us for a short period of time. He is welcomed home by his family, who try to eke out a living by working in cotton mills, and whose wages are barely enough to feed them after a recent law that has been passed to stop the import of cheap corn.

Leave aside the Corn Laws, when the specter of cotton is raised, many other injustices that British capitalism let loose upon the world come to mind. Cotton, as anyone with any idea about the British climate knows (despite the lovely beautiful pastures we have just been shown), is not something that grows on the island. It is imported from elsewhere, at cutthroat prices.

In fact, it is neigh impossible to keep a cool head when one tries to explain the several layers exploitation that goes into the cotton industry - slave and nearly slave labor used for cultivation, buying it at cheap prices from the colonies, and then making the northern populations of England work it in factories for very low wages. An acknowledgement of this chain of exploitation is conspicuous in its absence in this narrative. For every Manchester cotton factory worker going to bed hungry at night, there must be 10 in several parts of the empire doing the same.

The other, more readily recognizable, symbol of British colonial exploitation is of course the red coats that fought Napoleon. Before engaging in battle in Belgium, the two countries had engaged in battle in the Caribbean - another colonial depot Britain was hoping to acquire for cotton and coffee and all the other commodities to be consumed in Britain. But why do I go on with this history lecture? It may be because Leigh's cinematography in "Peterloo" has a certain vivid museum display quality. We have several close ups of the actors, equally when they are stationary, and you almost feel like you're peering into the face of waxworks in an ethnography museum. The images are so good in fact that they are hyper real, and so are somewhat robbed of life as in all hyper real art.

Leigh conducts his history lesson very thoroughly. After acquainting us with the poor simple folk, he introduces us to the more politically minded among the citizens of Manchester. We attend a meeting with village elders and councils and representatives who agitate for representation for the city. We are introduced to several archetypes of the "reformer;" the moderate one, the one who wants real change, and the one who wants the heads of the aristocracy to roll just like in France.

Although they are in some ways stereotypical, their narrative power lies in the fact that they are types that can still be identified in any political movement.

Leigh's history lesson extends to the print media, and we sit down to tea with newspapermen in Manchester, and see the making of a newspaper with the typesetting and the hand press. It's a good reminder that Manchester is the birthplace of one of U.K.'s most popular newspaper, The Guardian. Although I sort of knew this to be true, I am scandalized every time a character mentions that Manchester has no representation in the House of Commons, that the parade of representational government in the "mother of all Parliaments" is a bunch of southerners ensuring profitable trade for England's merchant houses. Yes, I find myself signing up for Brexit, petitioning Theresa May to leave with or without a deal.

The merchant class is also represented in all their callousness in the film. In the awful final act they are together in a building overlooking the crowd, and keep asking the head of police to arrest the reformist member of Parliament Henry Hunt, the speaker at the rally, which they suspect and hope will cause an outcry among the assembled and lead to many more arrests which will teach the workers not to ask for their rights again. The police chief then calls on the military to aid them - a military we have seen is busy drinking themselves silly and engaging in men's club's activities, waiting it seems for some action to come their way. You know, just the usual way they carry on in their drunken loutish state in the colonies. Leigh makes sure he introduces us to every bit of pettiness, ill will and greed that has gone into the making of this massacre and you are pinned in your seat as the heroes of Waterloo come hurtling towards you on their horses, and you can only look around to see who will be killed and who will be spared among the characters that Leigh has endeared to you throughout the film.

The heroes of Waterloo have now distinguished themselves by massacring innocent people seeking their rights. It then falls on the newspapermen to survey the killing field to report what has passed in St. Peter's Field, and the headlines write themselves: "Peterloo."