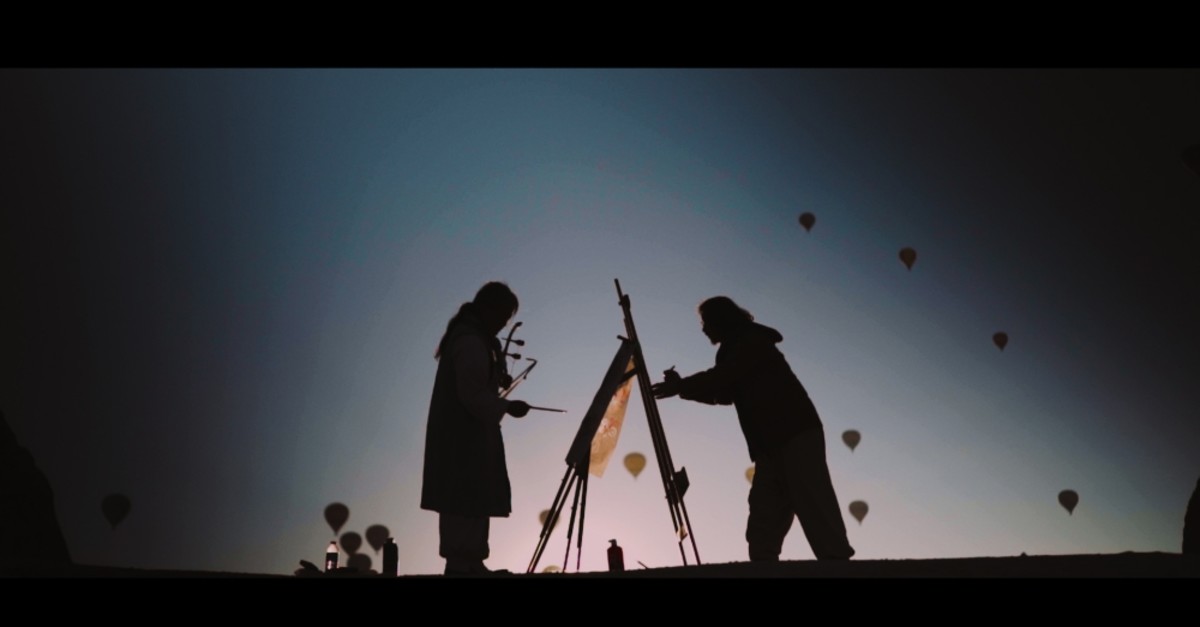 Having returned to Turkey from Italy's Firenze Short Film Festival with an award, short film director Okan Erünsal offers an insight into his film, how he struggled to shoot it and cinema in general

Young director Okan Erünsal received the best young director award at Firenze Film Corti, the leading short film festival in Italy, organized from May 30 to June 2. His award winning movie "Blue Butterfly" is about two South Korean painters dreaming for a utopia by using colors and figures. Lee Choeng Cho and Kim Moon-Tae want to give the world a message of goodness with their brushes and paint in this journey they started in their own geography. Along with their journey in South Korea, Turkey and Ukraine, the movie also focuses on the individual change of Lee after their paths separate. The colors, locations and the speeches of the artists are quite impressive in the movie.Having graduated from the Istanbul University Radio, Cinema and TV Department in 2016, Erünsal worked on short movies, stories, poems and video art throughout his education. While working as a video producer in his own company, he continues to produce in the fields of visual arts and literature and continues to work to support his productivity.

The first striking texture in the short film is the touch of documentary rather than fiction. The director knew the people in the movie before and started shooting videos about their work. "I've known Lee since 2013. I had the idea of shooting this movie since then but the opportunities did not arise. We couldn't set up the story. While this is a documentary, we also need to set up a story. Everything is not plain reality. We need to fill in some points. In certain places, the director needs to make key touches because real life may not always be interesting." 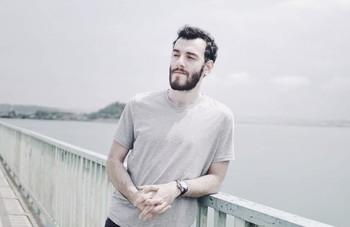 Before watching this movie, I had seen the sections of Lee's story shot in Tarlabaşı, Istanbul on social media.

"I used to shoot videos and share them on social media. I created a project for the movie at a funding platform called Fungogo. You need to offer something to collect funds. So we shot some videos. I tried collecting TL 15,000 because I had to go to South Korea but I couldn't," he said, explaining how the project came into being.

"I was his assistant at the South Korean art fair. I was a student at the time and the job at the fair was a month's work. I did the communications between him and Turkish visitors at the fair. We met there. He's a very respectable, great painter, and we stayed in touch," he noted.

In the movie, telling the story of the real life practices of Lee and Kin, we watch the duo visiting three cities by painting. Odessa, Cappadocia and Seoul.

"I traveled with the duo and finished shooting. They already had programs there. I had the chance to witness and record," Erünsal continued.

The duo's journey and art practices are quite inspiring. The movie's title refers to this very fact.

"The title 'Blue Butterfly' is from the culture of South Korea. I thought of it as a butterfly effect spreading from their own culture and painting."

One of the leading elements of the movie is the aesthetic use of locations. All three cities contributed significantly to the film's texture. Here, the director emphasizes the importance of space: "For me, location is also a character. I would say there are five characters in the movie. Two are the painters the others are cities. Odessa, Cappadocia and Seoul. I used sculptures and squares a lot in Odessa. It was more suited to the character of the city. Ukraine is very cold. I used cold tones. Cappadocia is warmer. In Cappadocia scenes, two painters have a utopia and they still have no conflict. They are still full of hopeful, so the warmth of Cappadocia coincides with their story. It's also a mystical place. They try to find themselves there. Ukraine is both cold and a city to get lost in. There they start having problems and they disappear in a sense. Our shooting order was Cappadocia, Ukraine and Korea. But we see Korea, Cappadocia and finally Ukraine in the film because the Ukraine is where it gets rough. This is where they lose utopia. They get into a conflict in Ukraine and Kim returns to Korea. This is no longer a utopia, but a story of individualization. They now continue on their paths separately.

The main focus of the young director revolves around the main concerns of human beings. 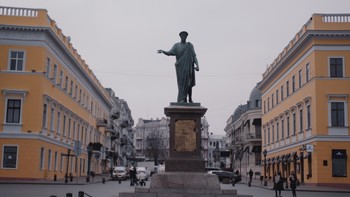 "The main concern here is people not being able to do something together. Individualization is a very basic problem. We did not know that Lee and Kim would fall apart. Everything happened in Ukraine. I knew something was missing in the movie until then. Everything was going too smooth. This conflict was necessary and it found its place. One day Lee came and asked to talk to me. He talked about the dispute with Kim for an hour and a half. I recorded it when he was talking. I had to convince Kim for the Korean foot of the movie. They went on their own ways after the movie," the young director said, giving insight about the individualization process that appeared during the shootings.

Erünsal made a short film titled "Negatif" ("Negative") beforehand and sent it to Marmaris and the Kısakes short film festivals. He went onto the international arena with "Blue Butterfly" for the first time and returned with an award. The film also attracted great attention from festivals in countries like Canada, India, Poland and Iran. Having started the festival run, the film is expected to travel through the year.

Erünsal naturally faced a financial burden, which is one of the main problems experienced by many young directors.

"There was already a place in Ukraine where Lee and Kim stayed. So I stayed with them. It is not an expensive country so it wasn't too hard. My previous boss supported me in Cappadocia. I sold my motorcycle to go to Korea. I looked for sponsors but couldn't find any. There is no sponsorship in the short film industry as this is not an area where you can have commercial concerns. This is why I think I protected its innocence as an art, at the same time," he highlighted.

Although he had to sell his motorcycle, the young director also feels grateful to his former boss Ali Argün and producer Aslıhan Örün, whose supports made filming possible in three cities.

The main inspiration of the young director is Japanese Akiro Kurosawa.

"I wish he was still alive so I could get the chance to learn from him. I also like Turkish director Onur Ünlü in the more recent years. I like his stance, character and his attitude toward life. 'Sen Aydınlatırsın Geceyi' ('You Light the Night') is one of the leading movies in Turkish cinema for me. I also like Canadian Xavier Dolan. Especially his movie, 'Mummy.' Dolan taught me a lot."

Making a feature movie is a common dream in the world of cinema. Erünsal said that short films would always be special for him even if he starts making feature films. "There are many shorts in my mind. I first have to shoot them. I want to continue with short films even if I made a feature. Short film has a very different taste. You have to give a feeling with limited time, location and budget in short films. I can say it wants an extra skill. It is also a risk. The short film market is a risk that many cannot take in Turkey as it's not developed. That is why short films are more amateur. For example, the practice of paying royalties to short film directors has not yet settled in the country's festival scene. Festivals are not willing to pay us royalties even though they sell tickets. We want our movies to be screened because it is important to reach people but short film directors and festivals do not have a proper relationship."

LEARNING ON THE GO

After Okan Erünsal returned from Italy with an award, the director explained that he also values the teaching side of movies.

"I can say this movie thought me 10 times more than any film school. It is actually a guerrilla movie. Their separation was unplanned. In three months' time, the movie actually developed itself during production. I learned something at each destination. Working with two mature artists was very instructive and educational. It developed me both personally and mentally. I prepared and asked questions in advance in some scenes but I also had surprise questions. I wanted them to give natural answers without thinking," he noted.

"I am not interested in photography. I used to shoot analog at one point but I was always interested in video. I don't look at photographs a lot. I usually view paintings and movies. I watched a lot of movies, and I'm trying to keep watching. There are different views on this issue. Some directors do not want to watch movies in order to avoid being influenced. I may not have watched a lot of movies like a cinephile but I did watch as much as I can."

Noting that along with the visual world and his editing ability, the director noted that reading had a critical influence on his movie making.

"For me, reading has a lot of impact on cinematic capabilities of a director. Reading improves filmmakers more than watching movies because it helps to understand how to set up the story structure. The history of the story is clear. Thousand years ago, and today, there are always indispensable elements such as character plot, conflict, anti-character, hero and hero's weakness. The same goes for cinema. For me, a good story just like a movie is not subjective but objective. They both have certain rules. If you cannot apply these rules you don't get a good set up. A movie cannot be good with a bad script. Of course this is not engineering but the story's set up is also important. The same rules apply in literature. We can't say you can't be a director without reading, but reading makes a good director. There are different opinions on this issue. For example, when Korean director Kim Ki Duk came to Istanbul, he said in an interview that he had never read a book. It is interesting how he creates his universes. He is not an artist who writes a lot of dialogues but still it is not easy for someone to establish those universes without being involved in literature. I respect him; I like his work but I don't find this very convincing."