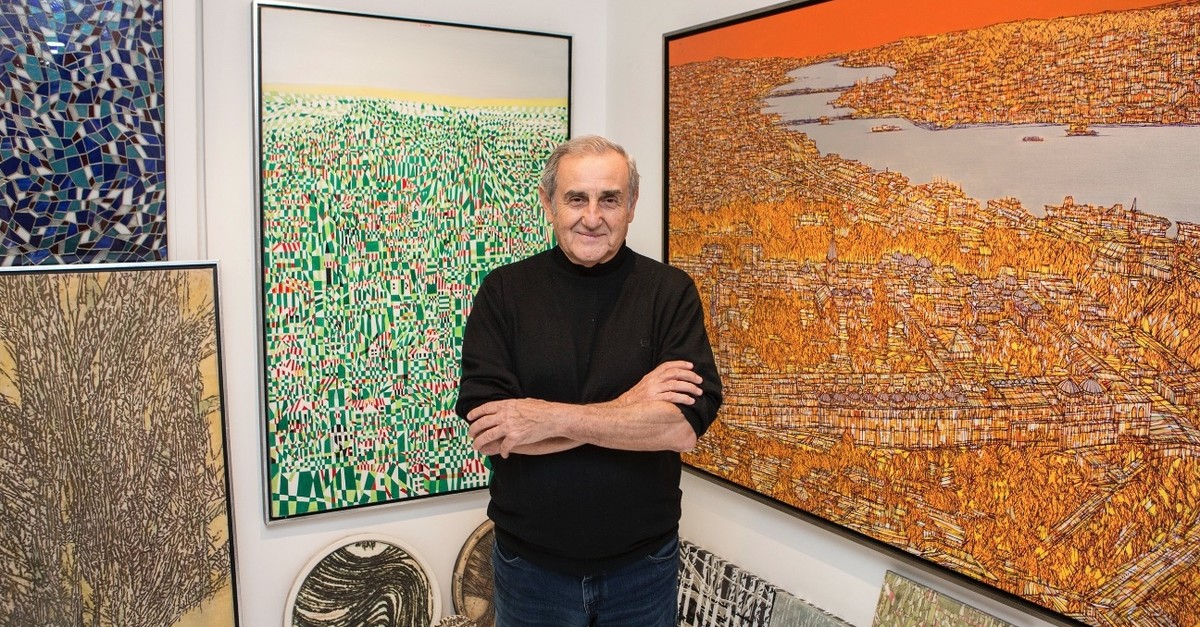 The first film of a series dedicated to Turkish painters will unveil the life story of Devrim Erbil.
by Daily Sabah with AA Jul 18, 2019 12:08 am

Born in Uşak province in 1937, Devrim Erbil is a prominent artist in the Turkish art world. Today, the artist's works can be seen in official art institutions around Turkey and special collections at home and abroad.

Widely known for his Istanbul paintings, Erbil is one of the values that the Painting Department of Istanbul Fine Arts Academy, renamed Mimar Sinan Fine Arts University recently, brought into the art community.

Erbil was a student of Halil Dikmen and Bedri Rahmi Eyüboğlu. In 1962, the painter was appointed as an assistant to the academy, where he completed his studies three years earlier in 1959. He became an associate professor in 1970 and a professor in 1981. He has curated several exhibitions that introduced Turkish art to the world and he has opened many group exhibitions abroad. 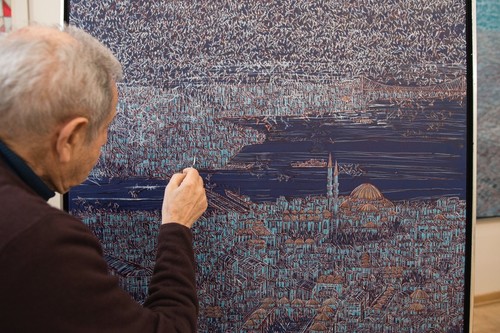 The artist is widely known for his Istanbul paintings and prints.

Work to adapt this veteran artist's life to the silver screen is about to start. Written by Durmuş Akbulut, the filming of the production "Devrim Erbil: Gökyüzü Öyle Maviydi Ki" ("Devrim Erbil: How Blue was My Sky") will start in Istanbul and Balıkesir provinces on Aug. 21. Akbulut will be also direct the film.

Speaking to Anadolu Agency (AA), Akbulut said that cinema owes its visual aesthetics to painting before everything else. Referring that he, as a director, takes action with this consciousness, he added, "Many film producers film with the feeling of painting world cinema history. Japanese director Akira Kurosawa is one of them. Some of Alfred Hitchcock's films directly take their influence from Edward Hopper's paintings. The effective 'dramatic light' in cinema takes its name from a painter, from Rembrandt, who is known as the painter of this light."

Noting that the idea of adapting the life stories of painters has been happening for a while, he said, "I used Johann Heinrich Füssli and Michelangelo in my first film 'Bekçi' ('Watchman'). In my second feature 'Kiraz Mevsimi' ('Cherry Season'), I benefited from the aesthetic of Jean-François Millet. I even used 'The Angelus' oil painting. While studying cinema in France, my interest in painting increased more. In time, I started to write stories to some paintings. My writings under the effect of John Berger and Roland Barthes were admired by many people. Then, they were published in a book titled 'Resim Neyi Anlatır'('What Does Painting Tell') in 2007. After this book, I shot documentaries of Andy Warhol, Gustav Klimt, Francisco Goya, Claude Monet and Johannes Vermeer. We have decided to add Turkish painters to this documentary series and will start with Devrim Erbil's story."

Drawing attention that the film is not totally biographic, Akbulut stated, "We need to know that this production is the first fictional feature that is about a Turkish painter in our cinema. Including drama and humor, it is a first offering fantastic elements sometimes. Such a film has never been shot before." The production will reflect the perspective of Erbil and will revolve around some events in the life of the talented painter.

Anatolia, Istanbul, trees, birds and nature, which Erbil always uses in his paintings, will also be used as the basic actors in the film. "These elements are reflected from the perspective of Erbil in line with cinematic aesthetic," Akbulut explained.

Adding that he carries a great feeling of responsibility while making the film, he said, "I knew Erbil in general. I learned the most subtle details of his art and have been still learning. I had a chance to learn of his childhood, academic years and daily life. These all have a priceless value for film producers. I can honestly say that I see Erbil as an elder brother or teacher. Therefore, I feel a responsibility for this film."

He thinks that some interesting things about the painter will affect the audience in the production. "First of all, Devrim Erbil is an accessible artist. When you meet him, you feel his friendliness. This makes you feel relaxed. His art of paintings mesmerized me. I knew the never-ending romanticism, subtle mind, wit and naturalness of the artist. If we talk in the context of the film, his childhood is really interesting, as well. I know that the lines and perspective in his work started in this very early period. When I first saw some paintings that he made when he was 15, I could not believe that a child painted them. He still uses the same lines, birds, trees and excitement in his works," the director shared.

Implying that the audience waits for a film with strong cinematography that separates bright and cold hues, Akbulut said, "When films about painters are mentioned, many of us think of a sulky, didactic, art-house films. However, our film about Erbil avoids these elements. It will reach from the painter's childhood in the Anatolian geography decorated with bright colors to Istanbul, which has cold colors sometimes, and return to the painter's childhood again."

The filming will continue for nearly four months. Akbulut stressed that they will start their work on Aug. 21 to finish the film before the autumn colors turn into winter tones in the country. Indicating that the film will be a Turkish-German co-production, Akbulut said, "'Devrim Erbil: Gökyüzü Öyle Maviydi Ki' will have a representation value at national and international levels."