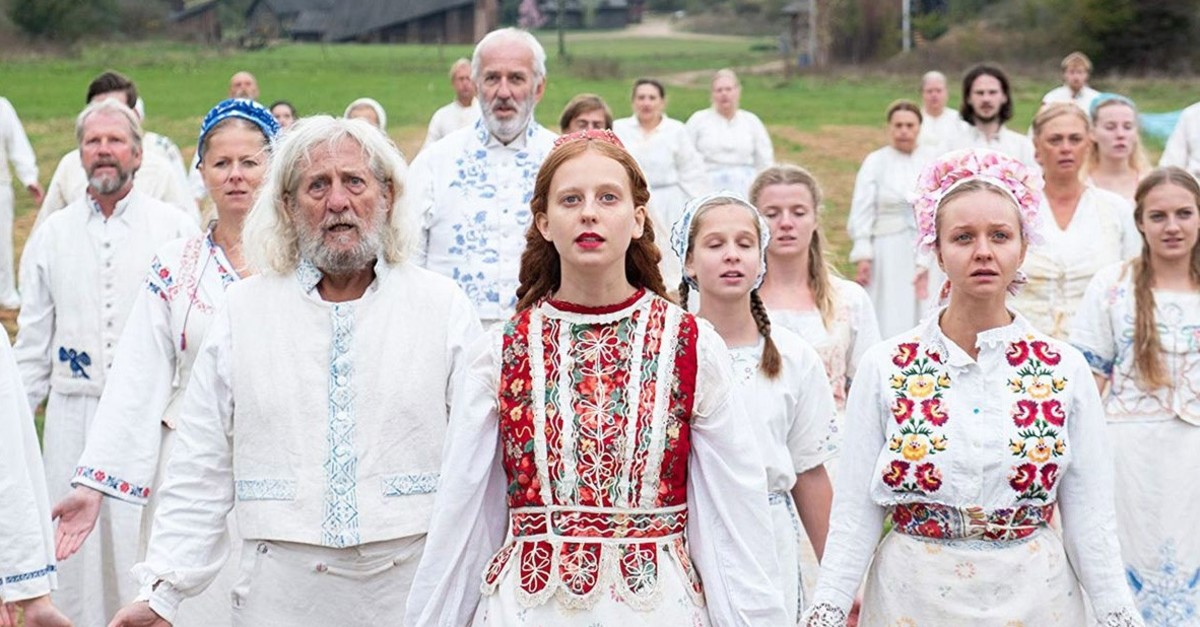 Young director Ari Aster, who rose to fame with his horror film "Hereditary," is striking back with "Midsommar," an out-of-the-box folk horror.

From the first second to the last, it is impossible not to admire his cinematographic photographic eye, especially with the mesmerizing aerial shots so vibrant they inspire motion sickness featuring the pastoral beauty of Sweden. He skillfully employs long shots for transitions between scenes. Plus, he seems to have a deep understanding of music as he boosts the depressing, thrilling and soothing effects through shaking intonations. Overall, Aster is a promising director with a perfect cinematographic approach despite his young age.

However, what strikes you most is not the picturesque settings shot with heavenly dexterity. Rather you will be struck by the unexpected rituals observed by an isolated commune in Sweden's Halsingland, named Harga. When five American youngsters set off to these mysterious lands, they are surrounded by daily urban and social problems. The only female of the group, Dani, struggles with trauma as her whole family recently died in a portentous incident created by her bipolar sister. Her boyfriend Christian is an ordinary, indifferent and inattentive guy who only sustains the relationship out of conscience. Besides, his near-compulsory mission with Dani includes three friends: Pelle, Josh and Mark. They seem to not care about anything except their studies and girls, like an ordinary lame American boys club. They set out on a journey to Sweden, all lured by Pelle, who is a member of the commune. He seems to make a friendly offer, implying he just wants them to have an extraordinary experience, a pagan-inspired ritual repeated every 90 years.

From the first scene in Sweden to the end, you anticipate something sinister is going to happen. You will have work it out part by part until you exit the theater hall shaken and traumatized. You will first be mesmerized by the intact nature ornamented with a wide range of lively colors, and the warm welcome shown to the guests from another world. As the local mid-summer festival proceeds, they witness traditional pagan deeds like elders jumping from the top of a cliff to have an honorable death. It is too late to abandon the commune: those who attempt to walk away are punished through extremely merciless and primitive executions like the "blood eagle," which is also known by the fans of TV series "Vikings."

Once you get in the commune as a man, a young lady might suggest having sexual intercourse to get babies out of the clan, to prevent inbreeding. Actually, inbred members who have obvious physical deformities are considered sacred and the guardians of the religion. Those who are not inbred are from other visitors, it happens. You do not get to refuse the offer as the commune gets you drunk with herbal fusions and takes your will away. After intercourse, you become disposable and doomed to be sacrificed.

All the visitors start to get lost for various reasons, soon to be discovered to have been punished cruelly. The only survivor is Dani, who first refuses to be there and then is persuaded by Pelle. In time, she fits in and becomes one of them; she even becomes the May queen as a result of a traditional dance competition. She finally has to choose one of the nine people who will be sacrificed at the end of the festival. Surprisingly she chooses Christian to be sacrificed, perhaps as revenge for his indifferent approach to her. She obviously feels embraced and like a member of the "family" when compared to the feelings of loneliness and unworthiness in her former entourage. Despite the many preposterous deeds, the clan is a big family connected by strong bonds, typical of a primitive commune. She never fits in with the American entourage but finds herself surprisingly healed in Harga. She becomes one of them, who will be doomed to jump off the cliff if she gets to live to the age of 72. We have no clues about her fate, but it is easy to conclude that she does not have any chance to leave if she lives.

As opposed to the usual dark and gloomy settings, Aster's Harga is sunny, colorful and lively, yet spawning equally terrifying rituals that will give you goosebumps. The film itself is once-in-a-lifetime experience bearing the touch of the skillful young auteur, with paradise and hell intertwined.