Once upon a Time in Hollywood: Tarantino gathers legends, including himself 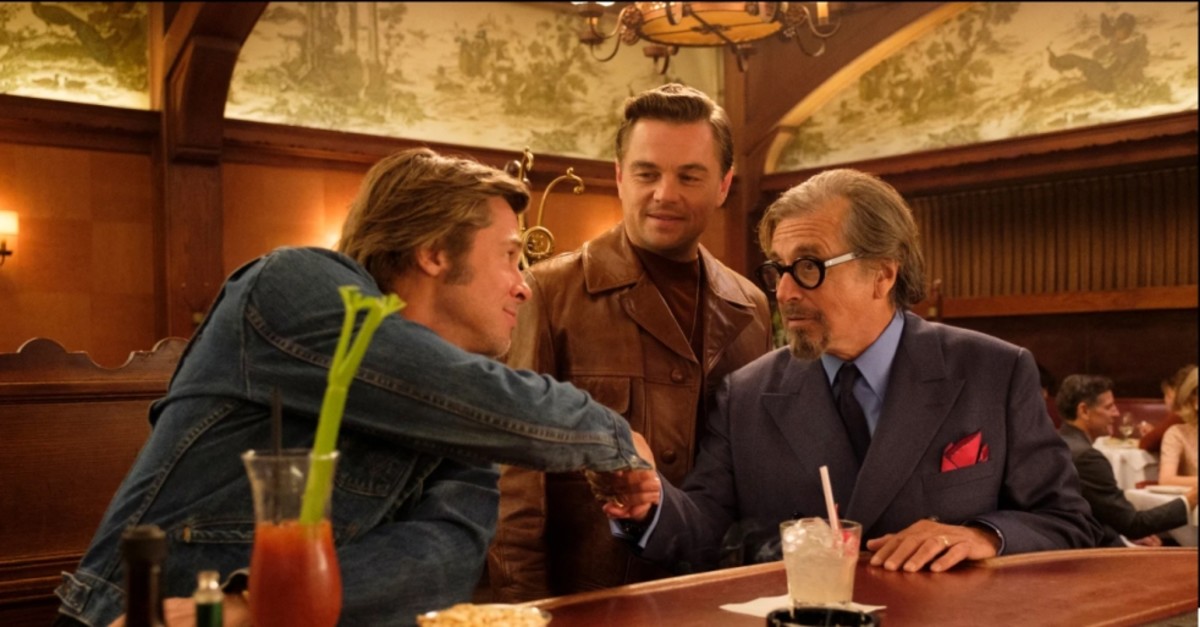 Brad Pitt, Leonardo DiCaprio and Al Pacino get together in Tarantino's film.
by Zeynep Esra İstanbullu Sep 07, 2019 12:12 am

As a loyal fan of Quentin Tarantino, I had long been waiting for his latest feature "Once upon a Time in Hollywood," not only as he brought together legends but also to devour his masterful cinematic narrative once more.

I do not have the words to express my admiration for Tarantino; still I can point out a few characteristics that have become his signature notes throughout his filmography of nine films so far. First, he sets up clear-cut good and villainous characters, equipped with delightful-to-watch capabilities, as in a novella. He always finds a firm frame of conflicts, so you don't have to look for them; rather, you can just enjoy seeing how it disentangles.

Second, he employs the tools of catharsis perfectly. When you finish the film, you feel relaxed as the villains always find their punishments, and you feel as if this alternative narrative of Tarantino could change terrifying incidents that happened in the past. For instance, in "Django Unchained" a black slave takes his revenge on the system and its guardians, while saving his woman from merciless hands. Or in "Inglorious Bastards," Hitler and his close circle are torched in a cinema hall, and you get to the highest points of catharsis as the villains fall. Tarantino's cinema is a kind of remedy for terrible incidents that cannot be undone.

Third, he makes use of music in its ultimate limits to depict the soul of the story and the era. Plus, the clothes, manners and objects are picked meticulously to ensure coherence and the atmosphere of authenticity.

Last but not least, one of Tarantino's strongest talents is casting. He finds the most suitable actor for a certain role and pushes the limits for himself, for the actor and the audience alike. One of the most striking was Leonardo DiCaprio in "Django Unchained." The white landlord, when Calvin Candie goes on a tirade about why black folks are facing what they deserve, you cannot take your eyes off of him while he smashes a black man's skull furiously. Plus, he continues to act even while his hand bleeds badly. DiCaprio is a gem of the acting profession, and Tarantino's directing skills undoubtedly open these talents.

In the ticket line for the film, I was expecting to see these indispensables that have made Tarantino Tarantino. Although in the first half of the film, I have to admit, I was a little bored and disappointed, the film compensated for it all in the second half.

The film is based on two main stories: one is between an actor and a stuntman in Hollywood at the end of the 1960s and the other is the notorious Charles Manson incident that cost the life of Sharon Tate and her friends. Although the second story is designed as the side story, I found it more interesting, touching and effective. The first story passes among men, portrayed by Leonardo DiCaprio, Brad Pitt and Al Pacino. It is filled with elongated dialogue among middle-aged men of the cinema sector, and it feels like Tarantino speaks his mind and years of experiences in the field through the actors. He uses cowboy film sets, which are obviously his favorites, as "The Hateful Eight" suggests.

DiCaprio plays an actor on the brink of being forgotten and trying to cling on in villainous roles, while his stuntman, Brad Pitt, helps out not only in films but also in his life. At 55, Pitt remains one of the most charming and talented actors with his fit body and homme fatale smile. He is certainly always watched and admired by many. Another treasure is Al Pacino, playing a manager. It is very precious to see him on the silver screen, with all his charisma and excellent acting skills. But DiCaprio displays such amazing acting that you want to cry for the beauty of his art. His sudden weeping sessions out of desperation are simply a blessing for lovers of the art of acting; so perfect they make you cry out of pleasure.

Still, I started find the dialogues between the men a bit too long, too male-oriented and boring after a while, just like many have felt in the famous "Reservoir Dogs," which is unbearably dialogue-packed, I have to confess. Even though the legendary trio of actors display a feast of acting, the first story could have been shortened.

Just as I was thinking that the film was going to let me down, Tarantino started to give what I was expecting from his unique cinematography. The story of the Charles Manson cult, the ranch they lived in, their lifestyle and how they become obsessed with Roman Polanski's wife Sharon Tate and her friends. He made the ultimate use of clothes, shoes, music and cars to reflect the trends of the era. His mastery speaks out in the sagacious choice of colors, popular songs, daily objects and manners. In his ninth feature, Tarantino has proved that he has built himself up a sound castle of cinematography, one has to give him that. Sometimes you find yourself thinking that bad things that mark history could have been hindered if something else had been done. This feeling of "What if" finds a promising, hopeful answer in Tarantino's stories. One of the "what ifs" in the recent past, the murder of the pregnant Sharon Tate and her friends, finds an alternative conclusion in this film, too, which gives you the familiar catharsis. I am not giving you spoilers, but you will be pleased with this alternative ending, I promise.

All in all, if cinema is the art of creating a more pleasant alternative fairy tale that is also close to real life, Quentin Tarantino deserves all the credit for writing one.