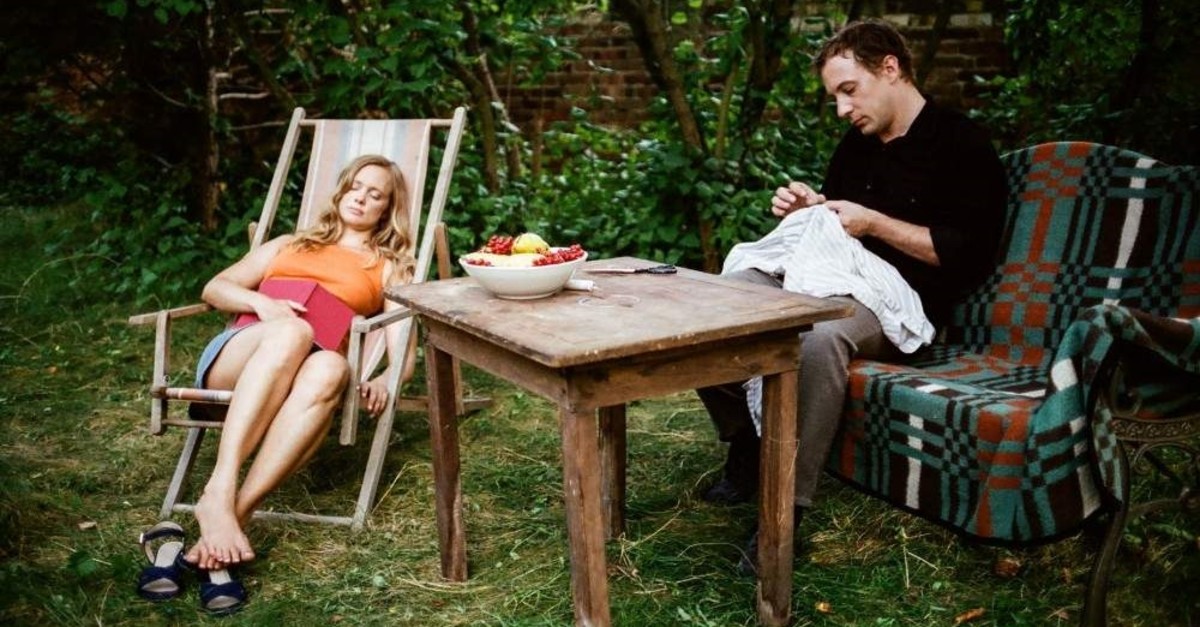 In its 11th year, Brand New Films from Germany offers a line-up of different connotations on the concept of family and cohabitation. The film program, titled “We are family,” includes broken homes, fathers and sons trying to reunite, alternative families formed by people who choose to live and work together. As part of the Brand New Films from Germany program, actors, directors and producers from Germany will participate in screenings and meet the audience. Director Dirk Schäfer and producer Çiğdem Mater will be in attendance during the screening of “Das Junggesellenhaus” (“The Bachelor House”). Another guest will be Cordula Kablitz-Post, the director of “Die Toten Hosen” (“You Only Live Once”). Following the film screenings, the guests will take questions from viewers.

“Das Schönste Paar” (“The Most Beautiful Couple”) will be screened at 1 p.m. on Nov. 24. Directed by Sven Taddicken and starring Maximilian Brückner, Luise Heyer, Leonard Kunz, Jasna Fritzi Bauer and Aurel Manthei, the film is about Liv and Malte's dreamy holiday on a Mediterranean island turning into a nightmare when three young men raid the house where they are staying at and rape Liv. Liv and Malte, both teachers, return home to Germany and slowly start adapting to their normal life, until Malte runs into one of the assailants one day and is filled with an insatiable hunger for revenge. The already-delicate balance of the couple’s relationship is on the edge of breakdown once again. Director Sven Taddicken depicts how the couple survives after the traumatic event through a cast of detailed characters and their daily lives.

"Gundermann," directed by Andreas Dresen and starring Alexander Scheer, Anna Unterberger, Axel Prahl, Thorsten Merten and Eva Weißenborn, will be screened at 3 p.m. on Nov. 30. Dresen's newest film is about the life of Gerhard Gundermann (1955-1998), one of the well-known composers and singers of the German Democratic Republic. While Gundermann works as an excavator operator in the coal mines in the Lausitz region, he also performs on stage in the evenings. Through his music, he garners a large fan base. In his songs, he includes a critical perspective on political and social issues as well as life and death. As Gundermann becomes an idol for many people in the East Germany of the 1980s with his very personal and candid songs, he also starts to get into trouble with the government in power. As the German Democratic Republic collapses, Gundermann continues to be a revered singer, even expanding his fan base. Even in 1995, the discovery that he was a spy in the country's intelligence service for the regime did not affect his success. Dresen introduces a complex and contradictory character in this highly-acclaimed biographical film, demonstrating that East Germany cannot be described as strictly black or white.

The "Roads" film screening is scheduled for 5:15 p.m. on Nov. 30. Directed by Sebastian Schipper and starring Fionn Whitehead, Stephane Bak, Moritz Bleibtreu, Ben Chaplin and Marie Burchard, “Roads” is about the 18-year-old Gyllen, who goes on a holiday from London to Morocco with his family and then steals his stepfather's recreational vehicle and runs away. He runs into William, a peer who is attempting to cross Europe's borders in search of his brother. The two young and lonely men decide to join forces. With a youthful fervor for adventure, these two young men who are very different from each other set off on the road and end up in Calais after passing through Morocco, Spain and France. A combination of different genres, “Roads” is a “story of growth” with the themes of life on the road and friendship. At the same time, the film draws attention to the refugee issue, one of the most impending and important problems of the modern world.

“Die Goldfische” (“The Goldfish”) will be screened at 5 p.m. on Nov. 24. Directed by Alireza Golafshan and starring Tom Schilling, Jella Haase, Axel Stein, Kida Khodr Ramadan and Birgit Minichmayr, the film tells the story of Oliver, an investment expert who works hard to achieve success. While trying to make it to a meeting, he drives his car into the opposite lane, causing a horrible accident. When he wakes from his coma, he is a paralytic undergoing treatment. Three months of treatment is meant to prepare him for the rest of his life, in which he will need to use a wheelchair. However, Oliver wants to flee this “prison for the disabled” as soon as possible. On top of his mounting troubles, he has a faulty internet connection. While looking for a strong signal, he finds himself inside a house where a group of disabled people are living together. The name of the group is as strange as the group itself: “The Goldfish.” Although Oliver tries to reject his situation, the facts force him to come up with a risky plan and he sets off with “The Goldfish” to Zurich in order to get a large amount of black money across the border. It is Alireza Golafshan's first feature film. The comedy, starring characters with disabilities, neither tries to be politically correct nor expects us to pity the characters, and that is exactly why it manages to be both contemporary and humane.

The “Die Toten Hosen” (“You Only Live Once”) screening will take place at 3 p.m. on Nov. 23 and at 5 p.m. on Nov. 28. Co-directed by Paul Dugdale and Cordula Kablitz-Post, the film tells the story of the rock band Die Toten Hosen from Düsseldorf, which is an unprecedented phenomenon. Founded in 1982 and rooted in the German punk movement, the band has been playing music for 36 years. Their lyrics include humor and instigation, as well as politics, and the band gives its perspective on today's world in their own distinctive way. Over the years, “Bis zum bitteren Ende” (“To the Bitter End”), one of their most famous songs, has become a way of living, not only for group members themselves but also for their fans. But could their vocalist Campino's hearing loss be a warning shot? For the first time, the members of Die Toten Hosen find themselves thinking that they might have to stop at some point.

“Adam und Evelyn” (“Adam & Evelyn”) will be screened at 1 p.m. on Nov. 23 and at 5 p.m. on Dec. 1. Directed by Andreas Goldstein and starring Florian Teichtmeister, Anne Kanis, Lena Lauzemis, Milian Zerzawy and Christin Alexandrow, "Adam & Evelyn" takes place in East Germany in the summer of 1989. A young couple, tailor Adam and waitress Evelyn, plan to go on holiday to Lake Balaton in Hungary. But when Evelyn finds out that Adam is cheating on her with another woman, she decides to leave for the holiday with her best friend Simone and her cousin from the West. Adam goes after her, but on the way, he comes across Katja. He drives the woman, who has no travel permit, across the border in the trunk of his car. Eventually, when they all make it to Balaton, they realize that the border between Hungary and Austria has been opened. Evelyn sees this as an opportunity to start a new life. Adam, on the other hand, is challenged by this sudden change. It is the first feature film by East Berlin-born director Andreas Goldstein, adapted from Ingo Schulze's book of the same title and translated into more than 10 languages.

“Das Junggesellenhaus” (“The Bachelor House”) will be screened at 5 p.m. on Nov. 23, and at 3 p.m. on Nov. 28. Directed by Dirk Schäfer, the film is set in a bachelor pad in Istanbul. The residents of the apartment are seven Kurdish men who earn their living as construction workers or peddlers. Living far away from their homes, these men are all waiting eagerly for Eid al-Adha (Qurban Bayram) in order to visit their villages. One day, their housemate Miro shows up with an unexpected guest, a Van cat. Miro is being forced into a marriage by his family but the woman he loves is in Istanbul. He brought home the cat as a gift to his lover.

“Ich War Zuhause, Aber” (“I was At Home, But”) screening is scheduled for 3 p.m. on Nov. 24 and 1 p.m. on Nov. 30. Directed by Angela Schanelec, the film stars Maren Eggert, Jakob Lassalle, Clara Möller, Franz Rogowski and Lilith Stangenberg. A 13-year-old boy named Philipp disappears one day. When he comes back a week later, he will not say anything about what happened. His mother Astrid, who raised Philipp alone, and his teachers have no idea why he disappeared and came back, and they can only make assumptions. They think that his father's death may have been a cause, but they cannot fully resolve Philipp's behavior. In the process, Astrid develops a different perspective of her bourgeois life and her work in Berlin’s world of culture, while Philipp is hospitalized due to blood poisoning. Prevailed by anxiety, feelings of failure and guilt, Astrid is quite inconsolable. But neither Philipp nor his younger sister turn their backs on their mother. Family ties unravel on the one hand, but are reestablished on the other.

“Atlas” (“The Mover”) will be screened at 1 p.m. on Nov. 28 and at 3 p.m. on Dec. 1. Directed by David Nawrath, the film stars Rainer Bock, Albrecht Schuch, Thorsten Merten, Uwe Preuss and Roman Kanonik. Walter, 60, works at a haulage company dealing with forced evictions. He is the man trusted most by Rolan Grone, the owner of the company. Walter ignores the physical suffering caused by this hard work, just as he ignores the suffering of the people whose private spaces he is forced into every day. One day, his boss embarks on a risky real estate project with a family involved in dirty business. First, an old building will be emptied, and then it will be sold again at a higher price. However, the last remaining tenant in the building resists the forced eviction. Walter thinks that this tenant is his son whom he abandoned years ago. Disguising his identity, he tries to get close to him and his family, but when he realizes how unreliable the people Grone is working with are, Walter finds himself in an increasingly difficult situation. In his first feature film, director David Nawrath tells the very specific story of a father and son who, with the help of actors who give a delicate performance, converge in the face of the brutality caused by an illegal situation.

The film, directed by Xaver Böhm and starring Noah Saavedra, Marko Mandić and Vanessa Loibl, will be screened at 7 p.m. on Nov. 28 and 1 p.m. on Dec. 1. When the hypochondriac Juri finds out he is being followed by a raven, his heart seems to stop. Because of the bird, he falls into the clutches of a mysterious man who speaks with a strange accent and claims to be death. An all-night journey begins for Juri, stretching from race car tracks to opium bars. Juri meets a charming woman named Nina at one of his stops. The stripper Nina takes her place next to "death," who has become the designated driver, and joins this duo who make their way to hell with a muscle car. Juri's heart beats out of his chest because he has fallen in love with Nina, but there is no escape from death.