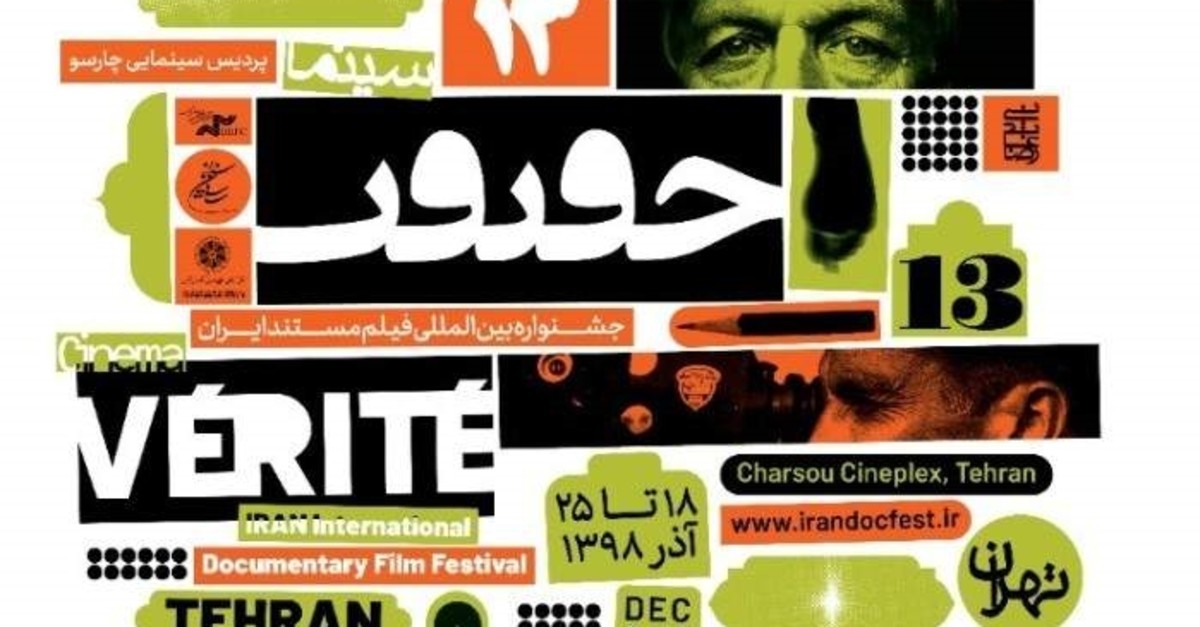 The festival will be held on Dec. 9-16 this year.
by Daily Sabah Dec 05, 2019 3:17 pm
The 13th edition of the Iran International Documentary Film Festival, also known as the Cinema Verite, will officially begin on Dec. 9 in Tehran. The festival, which runs through Dec. 16, will screen films in various categories including National, International, Mirror of Festival, Portraits, Special Screenings and Retrospective.
Festival organizers evaluated 687 films to select the Iranian documentaries to be screened while directors from more than 100 countries around the world sent approximately 6,000 works to the world competition section. The festival will also screen documentaries that won awards at other international festivals – including Locarno, the International Documentary Film Festival Amsterdam (IDFA), Hot Docs Canadian International Documentary Festival, Karlovy Vary and Visions du Réel.
Mohammad Hamidi Moghadam was announced as the festival director of this year's edition.
This edition is also due to hold various workshops in the presence of prominent international features, aiming to widen the horizons of young directors and equip them to make effective documentaries. These workshops strive to expand international research and mutual relations as well as create a significant opportunity for the youth to become familiar with remarkable documentarians.
At the international event, in which films from five continents will compete, documentaries from 39 countries will be introduced to movie lovers. Among 55 productions from 39 countries, German documentary filmmakers are in the lead with eight films. While France follows Germany with seven films, the U.S. and Italy will be represented by six films. Other participant countries include Turkey, the Netherlands, Qatar, Norway, Lithuania, the U.K., Russia, Spain, Poland, Egypt, Serbia, Afghanistan and Japan.
In the Mirror of Festival Section, Germany will compete with "A Woman Captured," directed by Bernadett Tuza-Ritter, as well as "The Color of the Chameleon," directed by Andrés Lübbert. Argentina will present “Arreo," directed by Tato Moreno, while France brings "Heart of Stone," directed by Claire Billet & Olivier Jobard to the stage, and Ireland presents "It’s Not Yet Dark" by Frankie Fenton, and Austria competes with "Welcome to Sodom" by Christian Krönes and Florian Weigensamer.
The Special Screenings Section will evaluate the French film “Blow it to Bits," directed by Lech Kowalsk, Italian "Bottoms Up" by Brunella Filì, Macedonian "Honeyland" by Ljubomir Stefanov and Tamara Kotevska, Dutch "State Funeral" by Sergei Loznitsa, Spanish "The Journey of Javier Heraud" by Javier Corcuera and a joint production by Austria, Germany and Italy of "Una Primavera" by Valentina Primavera.
The Portraits Section features the Italian films "A Cinema Prayer" by Andrei Andreyevich Tarkovsky, "Fellini fine mai" by Eugenio Cappuccio" and “Flavioh – Tribute to Flavio Bucci" by Riccardo Zinna. Greek Cyprus entered the competition with "The Ghost of Peter Sellers" by Peter Medak and the U.K. submitted "Unstoppable: Sean Scully and the Art of Everything" by Nick Willing. A joint production by France, Sudan, Germany, Chad and Qatar titled "Talking About Trees," directed by Suhaib Gasmelbari Mustafa, will also compete, along with "What We Left Unfinished" by Mariam Ghani, a joint production of the U.S., Afghanistan and Qatar.
The screenings for the Retrospective Section include the Ukrainian film "Home Games," "The Immortal" from Estonia and Latvia, Latvian film "My Father, The Spy," directed by Gints Grūbe and Jaak Kilmi, Croatian "Push-Pull" by Neven Hitrec, Bosnia-Herzegovina's "ReGeneration" by Emir Kapetanovic, Lithuanian film "The Sun Sets in the East from Lithuania” by Alexander Belinski and Agne Dovydaityte, and a joint production by Romania, Portugal and Hungary titled "Wild Berries" by Marianna Vas and Hedda Bednarszky.
Last Update: Dec 20, 2019 2:10 am
RELATED TOPICS