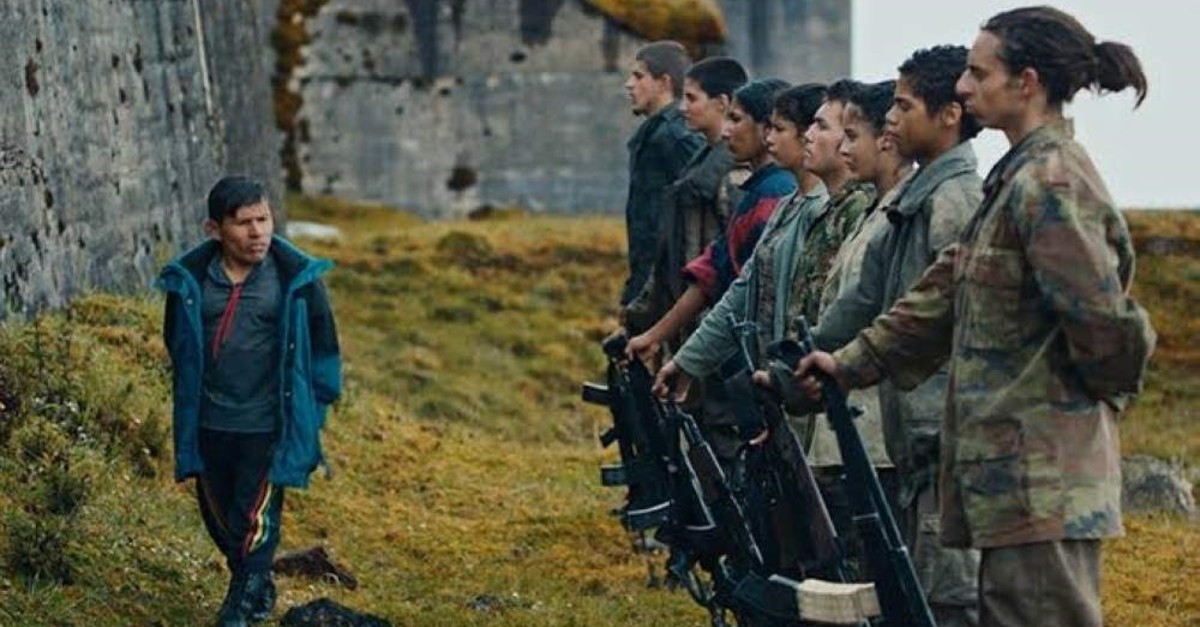 The third feature by Colombian director Alejandro Landes, "Monos" is a movie about a group of adolescents living on a mountaintop. The thriller opens with a scene in which the teenagers play football blindfolded while listening to the ringing of the ball on the goalpost. In the very beginning, it is frightening to see what exactly this teenager squad does. As the movie slowly reveals itself, you begin to understand what is happening, although some questions remain unanswered.

The teenage group, called Monos, is actually on a mission in this remote mountain camp on the backline of an ongoing war and they guard a prisoner named Doctora. The name of the place, the reason for the war or why Doctora is a hostage are all a mystery. The eight child soldiers with nicknames – Boom Boom, Wolf, Rambo, Smurf, Dog, Leydi, Bigfoot and Swede – receive instructions via radio from their superiors called "Organization." Additionally, a man called "the Messenger" trains them at certain intervals.

The Messenger brings a cow named Shakira to the squad and says it must be protected and milked, adding that it will explode if it is not properly cared for. In this rigorous camp, the children should obey the rules in order not to be executed. They even ask for permission to pair off. This is why the leader child Wolf commits suicide when Dog mistakenly kills Shakira.

When the children are alone, apart from their time with the Messenger, they act like normal youngsters – running, dancing and trying mushrooms they find in the jungle. Their fight-dancing scene reminds the viewer of William Golding's "Lord of the Flies." The scene where you see a severed pig head is also very similar to the one that Jack in Golding's novel places on a sharpened stick. In "Lord of the Flies," this pig with flies around it represents the force of evil. It is symbolically the harbinger of the loss of innocence in the boys. Therefore, the pig scene in "Monos" is the exact time when viewers understand that evil and good mingle in the story and the victim becomes the victimizer.

The children in the movie, like the ones in "Lord of the Flies," experience how challenging situations like war psychologically affect them and how they evolve into their own mini-society. After a surprise raid, their relatively peaceful days up in the mountains come to an end. While they try to survive inside the jungle, keeping their hostage safe, they establish hierarchies through their actions. Namely, the stronger wipes out the weaker, like it is in the adult world.

The production both shows the adolescent world of the children that gets lost in an adult mission and the children's struggle for power and existence. However, the performance of these very young actors in the middle of nowhere is what requires the most appreciation. In the film, recently announced as Colombia's official Oscar submission, they perfectly portray the characters discovering their heart's darkness in the wilderness.

When it comes to the imagery of the movie, the camera offers wide-angle shots creating serene views of nature with little human silhouettes. Abstract shootings like underwater sequences also support this feeling of serenity. However, the filming of dynamic scenes is also worthy of commendation. By using horror and elements of anxiety, it turns the mountain into a jungle and then into a green inferno.

Accompanied by the encounter of contrary frames, the film presents an ugly reality through children. In this sense, it can be read as a differentiated interpretation of Golding's allegorical novel.