Taika Waititi does it again: Down we go Jojo's rabbit hole with Hitler 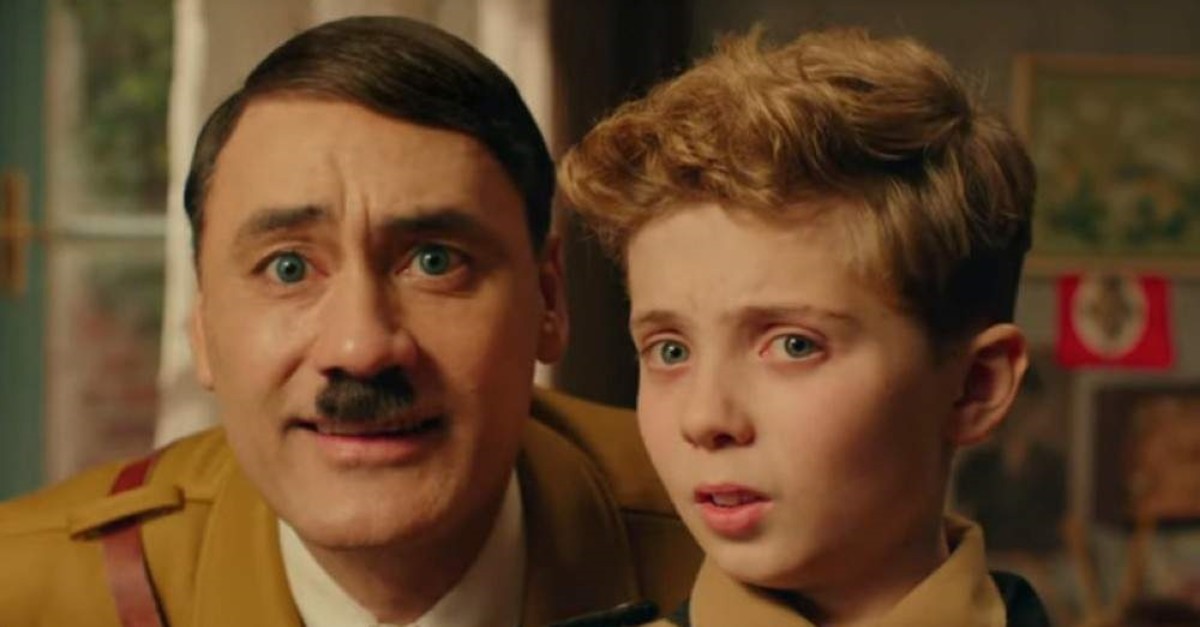 Despite all the bashing from critics, Taika Waititi's s 'Jojo Rabbit' is tender, daring and balanced enough in silly humor, energy and sadness that it distances itself from being tone-deaf and irreverent

"Jojo Rabbit" is a darkish, self-aware satire that channels the likes of Charlie Chaplin's "The Great Dictator" (1940) as it parodies one of the most evil people in history but also warns how serious things are.

Directed by writer/director and self-described "Polynesian Jew" Taika Waititi, the satire is bold and risky as it adopts a comical take on a highly sensitive era of the past.

However, I have to say that I don't agree with some critics who have called it unfunny, problematic and too soon to be a laughing matter. I think saying that is misconstruing the whole thing and other than the families of those who witnessed firsthand the horror that was concentration camps, the movie could be watched by a wide audience. I even think it serves society well, telling the youth of today about our unspeakable past in a way that piques interest. It also doesn't leave out the savagery of war – some scenes were pretty graphic for young(er) viewers. It showed that Hitler, too, was a populist that rose to power by sowing hate. The movie's release is timely, especially considering the recent revival of neo-Nazi and white supremacist movements worldwide.

Based on "Caging Skies," a novel by Christine Leunens, the coming-of-age movie tells the story of the lead-up to Germany's defeat in World War II through the eyes of a 10-year-old Nazi fanatic, Johannes Betzler. What makes his story interesting is that he uses "the" Adolf Hitler, a much more doe-eyed, kooky version of him at least, as his imaginary best friend who acts as the father figure missing in his life.

Betzler's father, the film tells us, has been deployed to Italy to fight for the Third Reich but many imply that he is a "coward" deserter and left the family to fend on their own. This sets the stage for Betzler to be bullied later at Nazi camp.

Betzler, played by the extraordinary Roman Griffin Davis, looks stereotypically German with blonde hair and blue eyes. He wears his Nazi armband with pride and joy, going about his day getting brainwashed by ludicrous anti-Semitic "facts" from his elders and teachers such as Jews smelling like Brussel sprouts or having serpent tongues. The degree of farfetchedness and idiocracy of these beliefs pairs well with Waititi's message. As with all of Waititi's films, there are hidden, as well as obvious, messages in every layer.

The biggest one? Tolerance is the antidote of hate. (For smokers out there, there's a message in it for you too.)

Johannes, or Jojo as he is affectionally nicknamed, dreams of becoming part of Hitler's army, and ultimately his personal bodyguard. He joins the Deutsches Jungvolk in der Hitler Jugend (German Youngsters in the Hitler Youth), a scout camp training Nazis-to-be, to embark on his dream.

Later he gets branded "Jojo rabbit" by the older boys at camp after he refuses to partake in a vicious task involving, as you can guess, an innocent rabbit.

After suffering an accident at camp to shake his image as a coward, his dreams are further compromised when he comes across the secret his mother Rosie, portrayed by the brilliant Scarlett Johansson, has been keeping right under their noses.

He finds out that his mother has taken in a 17-year-old Jewish girl named Elsa, played by Thomasin McKenzie, and to make matters worse, she is covertly a part of the resistance. Despite all efforts by Hitler, played by Waititi himself, in time, Jojo and Elsa start to forge a friendship as Jojo's prejudices fade day by day and Hitler's influence grows ever weaker.

The standout performance in the film is without a doubt by Davis. Johansson's portrayal as a peace-loving, cheerful and endearing mother who hopes that her lonely and confused boy does not turn into a hate-fueled "ghost" comes in a close second. The scene at the dinner table where she impersonated Jojo's father was something special, her emotional capacity and quick thinking really caught me off guard. It's no wonder she has scored Best Supporting Actress nominations for almost every award that matters.

Waititi's character, much like himself, was super fun and serious at the same time. With the flip of the switch, the Führer went from the loopiest person on the planet to a hate-driven madman – a good performance as well. We also have the hilarious and seemingly indestructible Yorki, played by Archie Yates, Jojo's demoted second best friend – the first, and always will be, is Hitler, says Jojo.

Maybe it was the unashamed British accent, round glasses and dark hair, but I can't be the only one that thinks Yorki looks like a cross between Harry Potter and a young Neville Longbottom, right?

Innocent jokes are sprinkled throughout the movie, and although all of them have this childish air and naiveness to them they hit hard because they are backed by truth. One I remember in particular is when Jojo interviews Elsa to collect material for his expose on Jews. "Where do Jews live?" an inquisitive Jojo asks. "In your head," replies a witty Elsa.

The dominant color palette throughout the movie is not like your typical World War II movie like "Pearl Harbor" or "Saving Private Ryan." The colors are varied and more pastel, and although there are a lot of grays, blues and greens all over, there's a few good pops of color. The one color that really sticks in your head as a viewer is red – the almost fushia-like shade of crimson worn by imaginary Hitler and the Nazi soldiers. The colors and visual style bring to mind Wes Anderson films, especially when "I want to hold your hand" by the Beatles, albeit in German, plays out as the film opens.

Toward the end of the movie, there are a lot of emotional scenes as well as suspense-building, heart-lurching moments that keep you glued to your seat. If you are empathetic in the slightest, you will shed a tear or two.

We always knew shoes tell a lot about a person and in this movie, they were a recurring motif. The moment when Jojo finally ties the knot is beautifully and painfully symbolic, signaling his transition from boyhood.

In short, Waititi's satire of Hitler and Nazi culture is certainly not your typical Holocaust film and it may be his riskiest yet, but it teaches you strong messages by making you feel uncomfortable with how much you laugh out loud.

Oh, and did I mention that the film is up for six Oscars, including Best Picture?
Last Update: Jan 30, 2020 4:47 pm
RELATED TOPICS