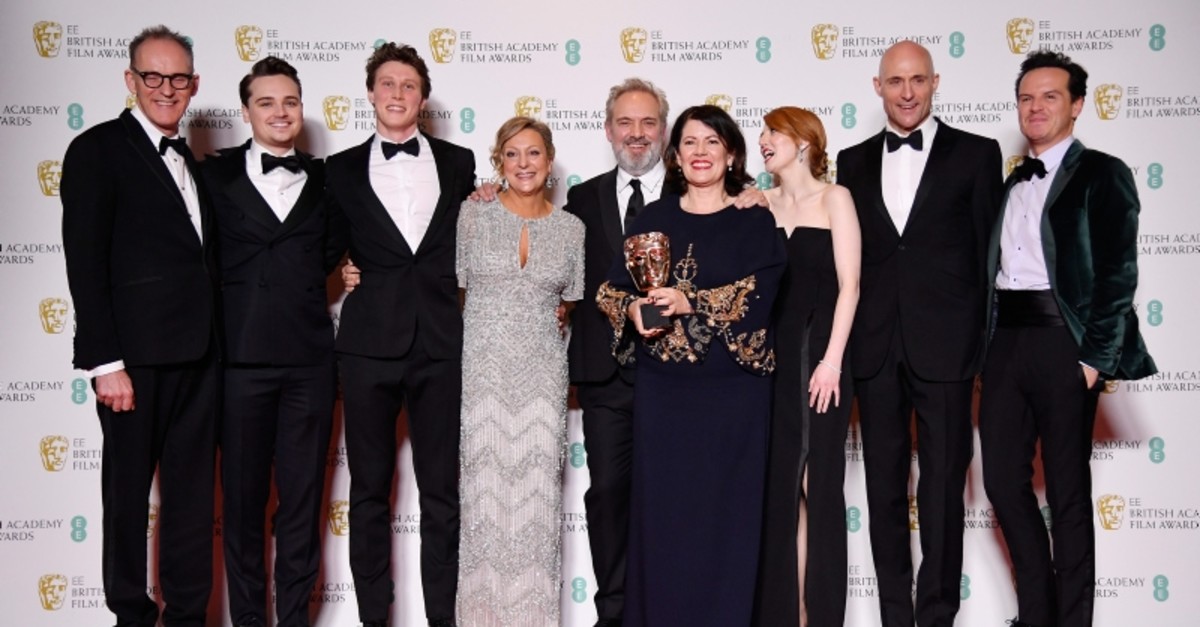 Sam Mendes' homegrown drama bested hotly tipped American contenders "Joker," "The Irishman" and "Once Upon a Time … in America" at a glitzy London event that was overshadowed by criticism of the nominees' lack of diversity - even from some of the nominees themselves.

Director Mendes based "1917" on his grandfather's wartime experiences. Shot in sinuous long takes that immerse viewers in the action, it follows two British soldiers on a perilous mission across No Man's Land to try to avert a suicidal offensive.

"1917" was also named best British film and won the cinematography prize - Roger Deakins' fifth win in that category. It also took the prizes for production design, sound and visual effects.

Victory at the BAFTAs is often a good predictor for the work that will be recognized at Hollywood's Academy Awards, being held this year on Feb. 9. Like the Oscars, the British awards have struggled to become less male and white.

No women were nominated as best director for the seventh year running, and all 20 nominees in the lead and supporting performer categories were white.

Phoenix slammed the lack of diversity in his acceptance speech, saying it sent "a very clear message to people of color that 'You're not welcome here.'"

Awards organizers called it "disappointing" that there were no performers of color among the acting nominees, who are chosen by 6,500 academy members who work in the U.K. and international film industry.

The rising star award -- the one trophy decided by the public -- went to black British actor Micheal Ward.

British star Cynthia Erivo, who is Oscar-nominated for her performance as abolitionist Harriet Tubman in "Harriet" but was snubbed by Britain's Academy, declined an invitation to perform at Sunday's award ceremony in protest.

The British Academy has promised to review its voting procedures.

"We've announced a wide-ranging review. We're going to be looking at everything across the board in terms of the awards process," said BAFTA chairwoman Pippa Harris.

"But also I think it's fair to say this is an industry-wide issue. It takes everyone to look at what they're doing," she said. "Awards are right at the end of a whole process, and so we need to look at the types of films being made, the opportunities that people are getting, how the films are being promoted. All of these things play a part."

Presenting the best-director award, Australian actress Rebel Wilson quipped that she could never achieve what the nominees did: "I just don't have the balls."

"So many women made great films this year. And I think it just goes to show you that there is a systemic problem that is very prevalent. And it's something that I think we're aware of but have to continue to fight against and make greater strides towards."

Hours before the event and several miles away, three people were wounded and a knifeman shot dead by police in what police called a terrorism-related attack. The BBC canceled plans to broadcast interviews from the red carpet on its news channel as a result.

Brad Pitt was named best supporting actor for "Once Upon a Time ... in America."

He didn't attend, but sent a jokey acceptance speech, read out by his co-star Margot Robbie

"Hey Britain - heard you just became single. Welcome to the club," he said -- one of several references during the ceremony to the U.K.'s exit from the European Union, which became official on Friday.

Pitt also referenced recent tumult in Britain's royal family, saying he was going to name the trophy Harry, "because he's really excited about bringing it back to the States with him."

Laura Dern was named best supporting actress for playing a take-no-prisoners divorce lawyer in "Marriage Story.She noted that her mother, Dianne Ladd, had won the exact same prize in 1975, when Dern was 6, for "Alice Doesn't Live Here Anymore."

Organizers set out to make the awards ceremony carbon neutral for the first time. The red carpet was made from recycled fibers. Instead of the goody bags of past years, guests will receive a "gifting wallet" made from recycled plastic and containing vouchers.

The post-awards dinner will feature sustainably sourced food, including a vegan option.

Phoenix, a lifelong vegan, joined an animal welfare protest in London before Sunday's ceremony. He was with a group of activists who unfurled a large banner on Tower Bridge declaring "Factory farming destroys our planet. Go vegan."

Stars walking the red carpet were encouraged to make "sustainable" fashion choices by wearing an outfit they already owned or renting one for the occasion.

Prince William — the British Academy's president — and his wife Kate, the Duchess of Cambridge, were the last to arrive, as the guests of honor at Sunday's ceremony. William presented a BAFTA Fellowship, the academy's top honor, to Lucasfilm boss Kathleen Kennedy.

"The Lord of the Rings" and "Planet of the Apes" star Andy Serkis -- the maestro of motion-capture acting -- was handed a prize for outstanding British contribution to cinema.

"We know it's been a hard week for you guys and it's very nice to take a little bit of your gold, back home -- where it belongs," joked New Zealand director Taika Waititi as he collected the best adapted screenplay prize for "Jojo Rabbit."