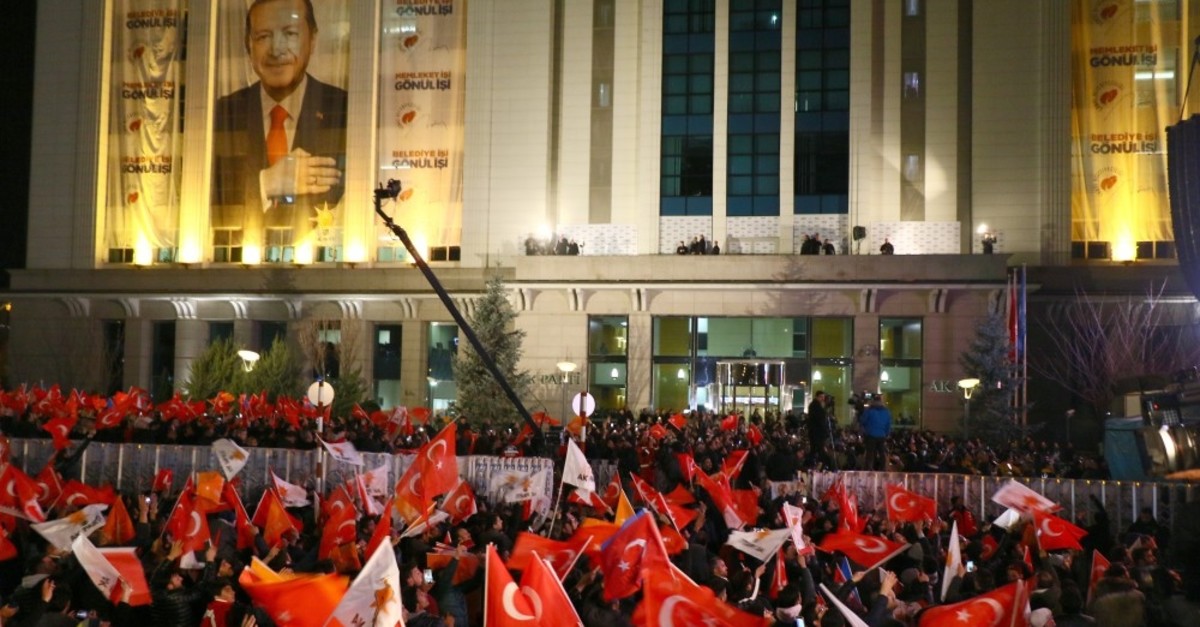 AK Party supporters wave flags after the results of the local elections in front of the AK Party headquarters in the capital Ankara, April 1, 2019.
by Muhittin Ataman
Apr 09, 2019 2:19 am

Turkey has experienced a series of significant elections – two local, four parliamentary and two presidential, along with one constitutional referendum – over the last five years. Last week's local elections were the last of this series for the next four and a half years. Throughout the elections, Turkey experienced two significant developments. First, the successful handling of domestic and foreign security threats. The government minimized the influence of the PKK inside the country and isolated the control of its Syrian branches, the People's Protection Units (YPG) and the Democratic Union Party (PYD), in Syria. Similarly, Turkey has cleared Daesh from its southern borders. The government also dismantled the "parallel state structure," namely the Gülenist Terror Group (FETÖ), in the state apparatus. In fact, Turkey struggled against these security threats with its own resources. The success of this has allowed room for the government to follow a more proactive foreign policy. Second, the state was restructured as a result of two developments: staffing the state apparatus after FETÖ members were weeded out following the July 15 coup attempt and the transformation of the governmental system.

Almost all state institutions, including the electoral system, have been redesigned according the new governmental system.

There are three main influential factors from the latest local elections regarding Turkey's foreign policy approach.

First, Turkey's image in the international arena. It is hilarious to see Middle Eastern countries, such as Saudi Arabia and Egypt, talk about the democratic process in Turkey. While, on the other side, Western views on the Turkish democratic experience are expected to change. It could be said Turkey is not on the same level democratically; however, Turkey is a country with a long and established democratic experience. Overall, after free and fair elections in Turkey, we have witnessed governmental changes in the country. Sooner or later these new realities will be recognized by the West.

The second is the new position of Kurds, who have traditionally been politically divided between two political parties. While the majority vote for the Peoples' Democratic Party (HDP), a significant portion also votes for the ruling Justice and Development Party (AK Party). Recently, Kurdish votes for the PKK-supported HDP have dramatically decreased. The AK Party won elections in four Kurdish-majority cities, namely Şırnak, Ağrı, Muş and Bitlis, and in many towns in the same region. The first two used to be the most significant strongholds of the HDP.

The third is the impact of the elections on Turkey's relations with other international actors. Turkey will continue to insist Western countries cease their support for the PKK, the YPG and FETÖ. Western countries may re-evaluate their policies toward these organizations, because the loss in votes for the HDP will increase the leverage of the Turkish side in international negotiations. Ultimately, the new period will end the defensive posture of Turkey, and the government will more likely follow a more proactive foreign policy. As mentioned by President Recep Tayyip Erdoğan, to start, Turkey will focus on developments in northern Syria.

In addition, Ankara will continue to pursue regional policies that prioritize stability and gradual change in the Middle East. It will try to prevent further polarization, ignited and continued by the pro-Trump bloc consisting of Israel, the United Arab Emirates (UAE) and Saudi Arabia on the one hand and Iran on the other. Ankara will play a more active role in resisting fait accompli situations in the region, such as the declaration of the united Jerusalem as the capital of Israel and the annexation of Golan Heights by Israel. That is, Turkey will continue to play a determinative role in its region as an active global presence.