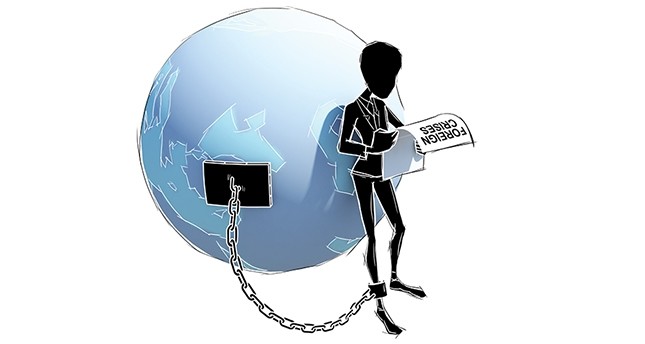 Turkey's mediator role in a number of foreign crises, trying to contribute to global peace and stability, is a model for all international actors

When we look at the broad spectrum of factors that drive either hostility or cooperation between Middle Eastern countries, we can see a common thread of thematic issues that crop up time and again across all of their relations: foreign military bases, border disputes, sectarian favorites, sectarian fears, proxies and differing relations of patronage between the United States and Russia. Notably, Turkey is the one country that does not fit into this seamless web of factors that determine relations between the countries in the region. As a NATO member, it has a strategic relationship both with its NATO allies and the U.S., but as a regional power it also has a pragmatic realpolitik relationship with Russia and to some extent Iran, especially regarding Syria at the Astana talks. As a former imperial power in the region, it has a knowledge of its history and the factors that shaped it, although it does not share the common trauma of uncertain borders drawn by outsiders and the creation of nation-states out of tribal realities.

Throughout the modern history of the Middle East, outside players, most notably the U.S., have tried to weave a course that serves their regional and global interests the best amid a ceaselessly changing landscape colored by age old feuds, changing societies and uncertain borders. It has to a large extent been a futile attempt, much like attempting to create neatly compartmentalized pockets in a desert of ever changing sand dunes. Yet the mistakes of the past are being repeated because of a lack of vision to guide policy insight. What the U.S. is attempting looks like a strategy, yet it is nothing more than a series of disjointed tactical moves, ranging from arming a terrorist group, the Democratic Union Party's (PYD) People's Protection Units (YPG), which are offshoots of the PKK, recognized as a terrorist organization by Turkey, the U.S. and EU.

Turkey, on the other hand, has been steering through the several crises of the region, by managing relations on three fronts: Global powers, regional powers, local actors and international forums. As if being previously rife with changing landscapes and age-old feuds were not enough, the region is now gripped with a storm of change. The fallout from waning U.S. interest in the region, the Arab uprisings, former U.S. President Barack Obama's administration's nuclear deal with Iran, Iran's subsequent efforts to increase its influence, the rise of China and the Syrian war and the ongoing instability in Iraq have all contributed to kneejerk reactions to these changes. The most notable manifestation of these reactions has been the recent Qatar crisis, fueled by an increasingly alarmed Saudi Arabia and its close allies.

In the midst of this storm, Turkey balances its realpolitik, state-to-state relations with its soft power of reaching out to what President Recep Tayyip Erdoğan calls Turkey's "moral hinterland." In fact, Turkey is the only country in the region that can pursue both policies in tandem. The recent Qatar crisis is a good example of this. At the inter-state level of diplomacy Turkey has kept its realpolitik outlook in trying to mediate between all parties, and supporting Kuwait's mediation efforts. It has also not backed down from proceeding with deployments to a military base in the Qatari capital, Doha, agreed to over a year ago. At the "moral hinterland" level, Turkey has signaled its determination to stand by the Qataris by stepping up food exports and other necessities to alleviate the effects of the blockade while asking Saudi Arabia and its allies to behave in accordance with Islamic traditions of mercy and understanding during the holy month of Ramadan. In fact, Turkey is supported by a robust infrastructure of aid and humanitarian relief agencies in pursuing its moral hinterland policy. The Presidency of Religious Affairs (DİB), the Disaster and Emergency Management Presidency (AFAD), the Turkish Cooperation and Coordination Agency (TİKA) and the Turkish Red Crescent are among the main actors in providing aid and humanitarian relief in Syria, Iraq and Somalia, among other places throughout the world, as well as taking care of nearly 3 million Syrian refugees within Turkey.

"Moral hinterland" refers to Turkey's historically shaped relations with the peoples of the region, embedded in responsibility and cultural and religious affinity. This is not to be mistaken with irredentism. These are invisible borders based on age-old understandings between people and societies, much more intertwined and intricate than can be clearly discerned with a naked Western eye. In terms of realpolitik, Turkey's relations with global and regional powers are kept separate from its moral hinterland. Take Russia, although at odds with Turkey over Syria with regards to the Assad regime, and despite a year long rift after the accidental downing of a Russian jet, Turkish-Russian relations have reached a new, heightened cooperation in Syria with the Astana talks and the agreement to create de-confliction zones in cooperation with Iran.

Bilateral cooperation is further strengthened with the Turkish Stream project, a pipeline that will carry Russian gas to Europe through Turkey, and the nearing possibility of Turkey purchasing the S-400 missile defense system from Russia, much to the chagrin of its NATO allies, who were not able to offer a satisfactory solution to Turkey's needs in this area. Relations with China are also on a new par because of the significant projects such as various tunnels, bridges and railway routes Turkey has integrated itself with and is set to be a natural hub of China's One Belt One Road initiative. Relations with the EU, meanwhile, may have become strained, but both Turkey and the EU know that the future has to ensure some kind of relationship where both parties can at least discuss and collaborate on the wide-ranging issues governing their mutual security and economic relations. This is more than likely to evolve into a strategic dialogue as envisaged in the 12-month roadmap, which is not confined to the acceptance/rejection impasse of membership talks.

Turkey's ties with the United States

When it comes to relations with the U.S., both Turkey and the U.S. need each other in managing change in the region. Despite serious divergences in interests, President Donald Trump's administration has gone out of its way to assure Ankara that the support given to the YPG for the Raqqa operation is tactical and not strategic and that it is Turkey, its NATO ally, that it wants to work with on the broader strategy of mapping the future of Syria. The use of Turkey's İncirlik Air Base by the U.S. and several NATO allies in the coalition against the Daesh terrorist group is also an important factor that makes Turkey an indispensable NATO ally, in the region.

Turkey's expertise as a NATO ally is also indispensable for post-conflict reconstruction in Syria. Turkey has a long-standing success story in peace building with its role in NATO's Afghanistan mission, taking command of the NATO force twice in that country. Turkey's successful non-combat role in that mission earned the trust, respect and love of the Afghan people, a rare source of legitimacy these days in a predominantly Western-driven mission of military intervention.

This does not mean that Turkey does not have an equally successful track record in combat roles for securing stability in the region. Operation Euphrates Shield, which commenced in August 2016 and ended in early 2017, has cleared 2,500 square kilometers of territory from Daesh, creating a pocket of stability and safety for the return of refugees.

Therefore, as a balancer of realpolitik diplomacy and with the infrastructure for effective deliverance of humanitarian aid as part of its moral hinterland policy, an active player in all international forums dealing with peace and stability in Syria, as well as a track record of successful combat and non-combat peace building missions, Turkey is best suited to provide stability through its various endeavors in a region that badly needs all the help it can get.