Turkey and the West: Functional ally to strategic partner 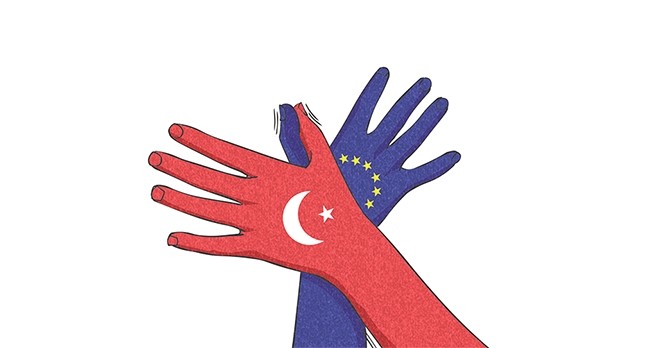 Beyond Syria, Turkey can work with its Western allies to establish sustainable stability in the region

The folly of reading Turkey lies in the myth that Turkey's current leadership has reduced its strategic relations with the West to a transactional level. The question that hangs over this assertion is that when has Turkey's relations been strategic if at all?

Throughout the Cold War, within NATO, Turkey was largely viewed as a functional ally that had a functional role in the alliance due to its two fundamental assets: A vital geostrategic location and the second largest army in NATO.

Beyond that, Turkey was never viewed as a strategic partner by its western allies. It was not in the picture in the making of the "transatlantic bargain" at the end of World War II. That bargain was to let a war-beaten Europe economically prosper and become a full-fledged partner in a global political economy based on interdependence, while the United States provided the security bulwark against the Soviet Union with extended nuclear deterrence.

However, underlying this bargain was a common vision between Europe and the United States. An essentially Atlantic vision based on an idea about a world order that depended on economic interdependence. This was based on an open postwar trading system in which U.S. leadership and control of that system protected this sphere of influence that jealously embodied a "way of life" that needed to be protected with military hardware with global outreach.

The legitimacy of that system rested on the definition of that way of life that was based on essentially Wilsonian values. Thus, the system had three components: military security, economic interdependence and values. The last needed international institutions to uphold those values.

The '90s saw a rebuilding of those very same institutions to spread the system beyond the post-communist world that had collapsed and to fill the vacuum after its demise. That included revamping NATO, the EU and the OSCE, redesigning the U.N. as the upholder and implementer of a collective security system and introducing new concepts, such as the responsibility to protect.

It has been a long journey.

In all this, where was Turkey? Was Turkey at the table at the founding of this system in 1945? No. Was it an active strategic partner at the height of the Cold War? Absolutely not.

One shining example is the Cuban missile crisis. In the most crucial crisis of its time, which almost brought the world to the brink of nuclear war, the vital issue was trading off Jupiter missiles stationed in Turkey. While this was being discussed between the Soviet and U.S. sides in backchannel talks and as an option on the crisis management table of U.S. decision makers in what was called the ExCom (Executive Committee), not at any time during this crisis was their NATO ally, Turkey, consulted about the repercussions of these discussions, although they affected Turkey's security directly.

American missiles deployed in Turkey could be put there and removed with the ease in which they had been deployed. This was in stark contrast to the public upheaval and demonstrations of the 1980s during the Euro-missile crisis that resulted in the deployment of U.S. missiles in the United Kingdom, West Germany and the Netherlands.

The Cuban missile crisis and its potential impact on Turkey's security were hardly mentioned in Turkish public debate or the media. In short, Turkey was the epitome of a functional ally, not a strategic partner. Even after the end of the Cold War, despite providing the military presence for many peace-building missions from Bosnia to Afghanistan that was essential for the redefinition of the post 1945 liberal order in the '90s, Turkey had no input in revamping its design.

From time to time, lip service was played to elevating Turkey to strategic partner status, but only when Turkey's security concerns prompted it to act unilaterally, which raised alarm in the minds of its Western allies that it might stray from the fold, such as in northern Iraq in 2007. But in real terms, that strategic partner status never materialized.

Given the criticism leveled against Turkey now that it has reduced its strategic relationship with the West to a transactional level, this is the time when Turkey is emerging, as a true strategic partner in the region where a strategic partnership between Turkey and the West did not exist before.

The immediate test to reevaluate the Turkey-West relationship within the parameters of a real strategic partnership is Syria. It is impossible to foresee an end to the Syrian war with a political solution paving the way for stability and sustainable peace without the role of Turkey.

Turkey is the only NATO ally that is a partner in the Astana talks with Russia and Iran that recently reached an agreement on implementation of four de-escalation zones. Astana delivers on the ground and paves the way for a sustainable political solution in Geneva.

Turkey has a vital role to play in post conflict Syria with its Western allies. First, its long-standing experience of peace-building in Afghanistan as the only NATO force in that country that had a successful record of good relations and trust building with the local communities. Surely, Turkey can carry this experience of peace building into Syria.

Furthermore, it can have an important role in education in post war Syria, helping to redesign curriculums that address the needs of sustainable peace, merging universal values with local cultural and religious ones. In Bosnia, this had become a problematic issue with curriculums designed by external actors who had little knowledge of the local culture and beliefs.

Beyond Syria, Turkey can work with its Western allies to establish sustainable stability in the region. For the United States, carrying forth a policy of off shore balancing that requires allies and regional partners to take care of regional stability within a global trading system, the ideal strategic regional partner is Turkey.

It is time for the West to stop paying lip service to Turkey's accession to strategic partner status and it is definitely time for Western observers to stop false assertions that Turkey has reduced its relationship with the West to a transactional level. Shaping the region for sustainable stability can hardly be achieved through transactional relations. This is not the relationship Turkey wants with the West.