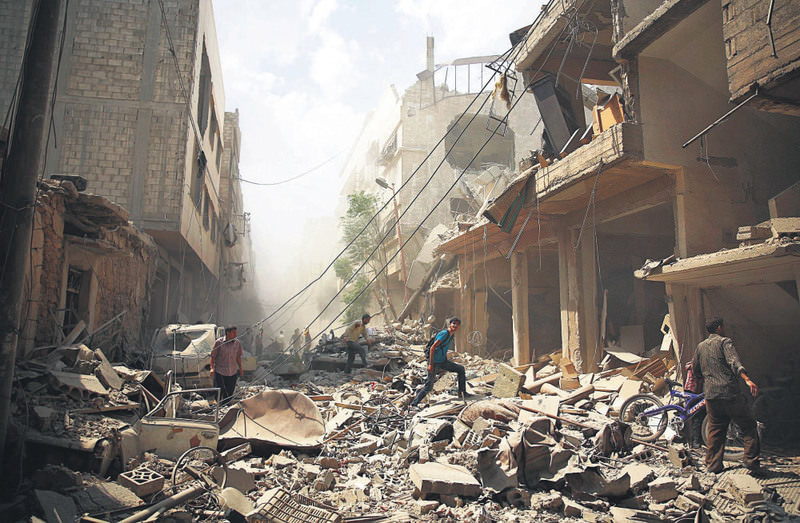 Syrians walk amid the rubble of buildings destroyed following reported airstrikes by regime forces in the moderate-held area of Douma, east of the capital Damascus, Syria
by Beril Dedeoğlu Dec 07, 2015 12:00 am

It is normal for a state to declare sanctions that do not target the concerned country's civilians, but only hurt its ruling elite. This is what the Western powers did when they imposed sanctions on Iran or on Russia.

These political declarations often mean nothing at the practical level. When you impose sanctions on a specific country, that means you intend to weaken its commercial ties or investment relations. That also affects tourism, academic links and so on. People involved in those kinds of relations do not represent their governments. They are just business people, students, travelers or academics.

This is why Turkey is saying that the Russian decision to impose sanctions is bad for people-to-people relations, while Russia pretends that those sanctions will not impact the man on the street. Nevertheless, sanctions can never only punish the given country's government. The entire nation will have to face its consequences too.

Hence, Vladimir Putin's recent declarations that he respects the Turkish people and that he doesn't intend to harm ordinary Turks are meaningless. One way or another, the Turkish people will suffer from the sanctions; thus, Turks don't pay any attention when Putin says how much he loves them.

When business people are no longer able to develop their businesses in Russia, when ordinary travelers face difficulties in airports, when academics become unable to carry out research in Russia, who will they blame? If Russia decides to stop the natural gas flow and people freeze in their homes, at whom will they point the finger?

Russian decision-makers perhaps hope that the Turkish people will get angry with their own government and begin to wish that the Russian jet incident had never happened. Maybe they also expect business people to pressure the government so the latter will have to accept anything Russia asks for.

I don't know if things are any different in other countries, but no matter what, the Turkish people have developed a different social reaction to all this. Most people in Turkey are perfectly aware of the profound reasons for Russia's anger. They have noticed that Moscow is trying to reinforce its place in the ongoing global strategic struggle and through Turkey, Russia is fighting the U.S. and NATO. Besides, Turks have a common memory about the historical aspects of Turkish-Russian relations.

President Putin emphasized recently that Russia has nothing against the Muslim world, but it is hard for ordinary Turks to remember any specific case when Russia has actually helped Muslims in any part of the world. It is not possible to pretend that Russians have nothing against Turks either, while Russian jets are bombarding Turkmen villages in Syria.

In brief, Turks aren't angry at their government but at Russia. Many people have already declared that they are ready to face the consequences of Russian sanctions, and they don't want Ankara to step back. Iranian people have always stood by their rulers during the long years of American sanctions; one shouldn't expect anything different from the Turkish people. Because of the Western sanctions, Iran had to develop strong ties with Russia, and now Turkey will get closer to a number of countries to ease the impact of Russian sanctions.

The Russians are maybe counting on a few pro-Russian people in Turkey, but these people don't really have an influence on Turkish public opinion. Moreover, one has to keep in mind that Turkish nationalism has always been exacerbated when Turks have felt antagonism from a great power.
Last Update: Dec 07, 2015 2:08 am
RELATED TOPICS