If only Eurovision was a song contest 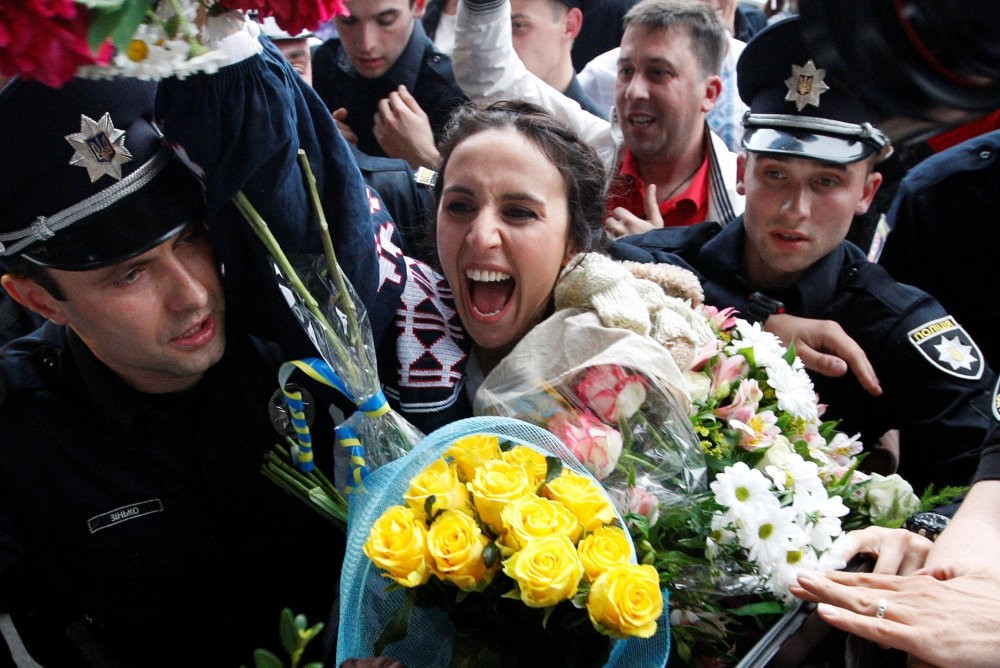 Crimean Tatar singer Susana Jamaladinova, known as Jamala, who won the Eurovision Song Contest, reacts at a welcoming ceremony upon her arrival at Boryspil International Airport outside Kiev.
by Beril Dedeoğlu May 18, 2016 12:00 am

The Eurovision Song Contest is an arena for people's identity quests, power struggles between divergent countries and Europe's identity crises are at the center of the event

The Eurovision Song Contest is a good platform where one can see the relations between states and peoples. In the early years of the contest, the winner, in other words the best song, was selected by national juries of renowned musical experts. In the 1990s, the organizers decided it was time to democratize the process, so they developed a system allowing people to vote. This was subsequently considered ineffective because people in different countries developed the habit of always voting for the neighbor. It was not even certain they were really listening to the song, or cared about it, but Cypriots voted for the Greek entry, Turks for the Azerbaijani song, Sweden in Norway's favor and so on. The organizers finally concluded that the people cannot be trusted concerning musical quality, so they developed a system combining popular and jury votes like in a bicameral parliamentary system. This is perhaps the model the U.N. should adopt.

This year's competition, the 61st Eurovision Song Contest, sparked a number of crises since day one. Germany had to change its contestant, as the country's initial choice, Xavier Naidoo, was revealed to have racist and homophobic views. Then Romania was disqualified from the competition because of unpaid bills to the European Broadcasting Union (EBU).

Another crisis was about the flags the audience could display at the competition venue. The EBU published a list of unacceptable flags, which included flags of disputed territories such as Nagorno-Karabakh, Palestine, Kosovo, Crimea, Scotland, Turkish Cyprus and the Basque region and of terrorist organizations like DAESH. Autonomous regions such as Catalonia protested because in their country they can use their flags legally, Palestine protested because it said it does not want to be treated like DAESH and Crimeans protested because they believed this was a covert recognition of their country's annexation by Russia.

The EBU justified its decision by the will to avoid politicizing the event, and they said only the national flags of U.N. member states would be allowed along with EU and U.N. flags. The explanation hardly convinced Turkish Cypriots, Kosovars or Crimeans.

Russia also found something to complain about at every phase of the event. For example, they asked for the disqualification of Ukraine, claiming that its song was politically charged, which is a violation of the contest's rules. As a matter of fact, Ukraine won the 2004 contest with a universal song, but this year's song was as local as it can get. This was clearly a reaction against Russia's policies.

Ukraine's representative was Jamala, Susana Jamaladinova is her full name, a Crimean Tatar. Her song, 1944, was a reminder of the deportation of her people by Stalin that began on May 18, 1944 from their land to Central Asia. The memory of this tragic event was refreshed, of course, by Russia's occupation of Crimea in 2014. I am not sure if this was indeed the best song in the contest, but it seems that the jury and the people loved the message it conveyed.

The Eurovision Song Contest is quite efficient for those who study stateless people's identity quests or power struggles between divergent countries. Europe's identity crises are also at the center of the event, and it revealed this year that ordinary Europeans are indeed frightened by Russia's current policies. It is also alarming because it proves how easily latent problems can turn into hot crises.
Last Update: May 18, 2016 1:27 am
RELATED TOPICS