Are Russian hooligans for Trump? 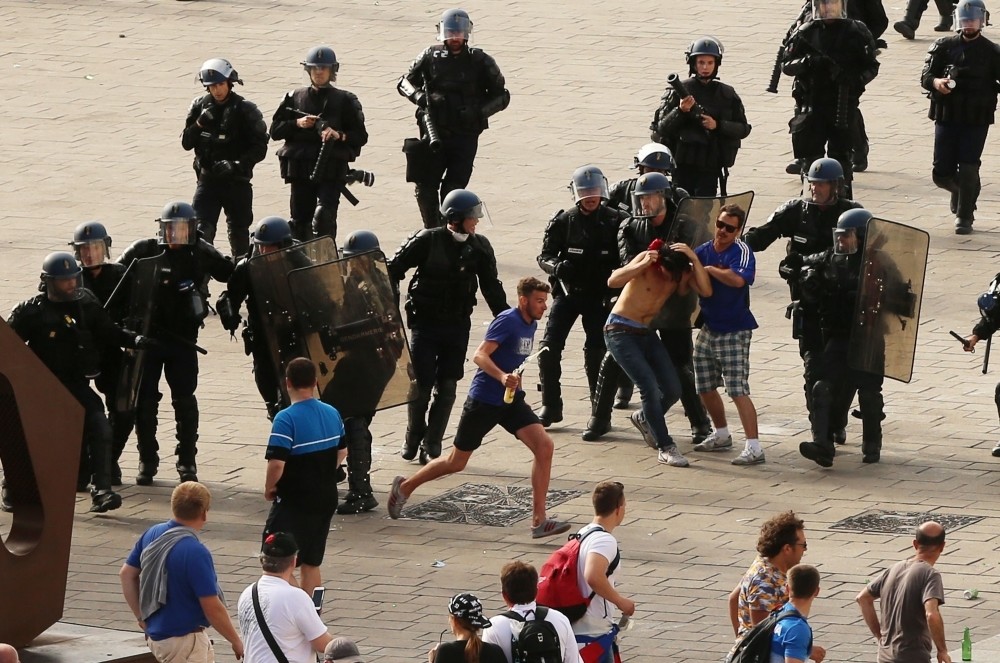 French riot police moving in to detain Russian football fans after violence broke out between supporters ahead of the England vs Russia Euro 2016 football match, in Marseille on June 11, 2016.
by Beril Dedeoğlu Jun 21, 2016 12:00 am

One may think these are just football fanatics, but these incidents reflect a deep enmity between peoples and have already become an issue between countries

Russian hooligans have definitely marked the Euro 2016. From day one, they have been fighting with everyone and made the headlines. Especially their brawls with English fans will long be remembered. One may think these are just football fanatics, but these incidents reflect a deep enmity between peoples and have already become an issue between countries.

Russian fans who have caused a lot of trouble for organizers in France and Germany are said to have been trained specifically for these brawls. They have attacked Spanish and English fans and they seem to have planned it for some time. Some of these fanatics have been arrested, but Moscow has reacted angrily to that. Russia believes European countries are just being anti-Russian.

It is known that sporting events sometimes push rival fans to express their nationalist feelings a little bit harshly, so in that sense, there is no surprise that English and Russian fans fought in the streets. There is an old political rivalry between these two nations, so one would not expect these fans to like one and other. But why do they express this dislike on the streets of France?

We know that relations between Russia and the EU are quite bad since Moscow's decision to not leave Ukraine to them. Russia was so determined that it annexed Crimea despite condemnations from the international community. The U.K. was particularly severe in its condemnations, but France and Germany were not. Paris has always been understanding toward Russia while Germany considers the country an immense market. Eastern European countries, however, are particularly annoyed by Russian advances and they expect more of a reaction from the German and French governments. These former Eastern Bloc countries keep calling the U.S. and NATO to do something serious against Russia.

It is not a coincidence that the next NATO summit will be held in Warsaw on July 7-8. This city had given its name to NATO's main enemy, the Warsaw Pact. NATO has decided to send extra troops to the Russian border ahead of the summit. Poland and the Baltic countries will receive 4,000 additional soldiers.

These countries cannot possibly believe that Russia would try to occupy Eastern Europe, yet it seems they are really afraid and they do not want to take any risks. Thanks to the hooligans, now the French and Germans are probably afraid, too.

Because of their fear of Russia, Eastern European countries are getting closer to Britain's anti-Russian policy line. These countries definitely do not want the U.K. to leave the EU, and maybe Britons will listen to them.

An anti-Russia Europe is not only the U.K.'s wish, it is also what U.S. Republicans need. Donald Trump, the presumptive Republican presidential nominee, may not appear particularly anti-Russian because he is completely preoccupied now by Hispanic or Muslim immigrants. Nevertheless, the Republicans' main foreign policy line is based on challenging Russia, and they believe Europe is bound to cooperate with the U.S.

As long as Russia keeps threatening Europe, the EU will lose its importance for Eastern Europeans, as they will need more NATO assistance. Everyone knows that NATO is a tool to strengthen American influence over Europe. Russian President Vladimir Putin's declarations, little diplomatic crises, Russia's air space violations and now the hooligans are all encouraging Europeans to get closer to the U.S.

U.S. President Barack Obama once had a policy to win Russia, now it is about making a deal and putting a new game in place. Putin understands that and agreed. The next U.S. administration will fully enjoy this game.
RELATED TOPICS