US election and its global impact 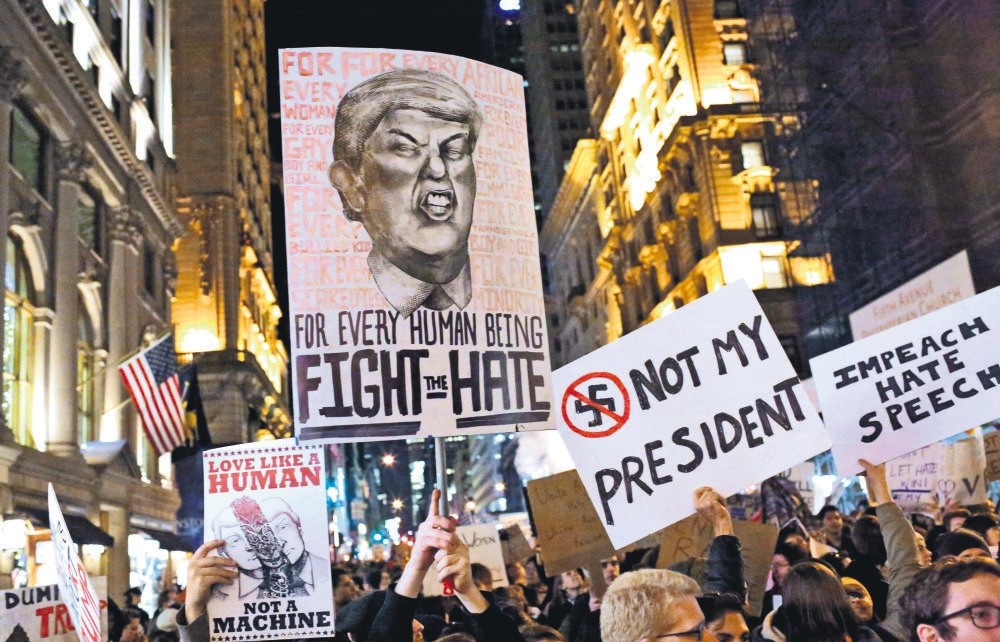 Mr. Trump's reaction over the ongoing protests in the post-election period in the U.S. will directly affect other decision makers worldwide

The presidential election in the U.S. is not important for Americans only, it is something that effects everyone worldwide. This is not surprising when you think of the U.S.'s significance in international politics. The foreign policy line that will be adopted by the new president will have an important impact on every nation and people. So there are no excuses for turning a blind eye to the U.S. presidential election.

A number of respected news outlets did everything possible to prevent Republican Donald Trump from becoming president. Every public survey company was wrong in its estimates, as well as most political commentators. Political scientists have already begun discussing the rise of populism and the future of pluralist democracies. Populist leaders around the world, such as Trump, exploit their nations' fears, present themselves as the only imaginable savior in these tough circumstances, use their nations' founding myths in order to emphasize national values and claim that their way is the only way to increase national wealth.

Populism has proven enough to win an election, but will it be sufficient to rule over the country? When you activate deep-rooted fears, you have to make sure that "we" are more powerful than the "others," so our national existence is not put in jeopardy. That is easier said than done.

President-elect Trump has promised he will return the U.S. to its "golden age." He probably wants to do it without provoking a world war, but he intends to implement protectionist policies. He will probably say that the best way to protect the American people and its economy from foreign threats is to "build walls" in every sense of the word. If the U.S. adopts such a stance, many other nations will do the same.

It is too early to make a judgment about Mr. Trump, however, as he is not yet in the White House and we cannot possibly know if he will indeed keep his campaign promises. The problem is, Mr. Trump is reminiscent of a lot leaders who came to power just before great wars, leaders who kept talking about the state, national interests and power.Another interesting aspect of the U.S. presidential elections was the result of the popular vote: The majority of Americans voted in favor of Hillary Clinton, but the U.S.'s electoral system has an interesting way of working: Mr. Trump has been the declared winner, with less votes. Moreover, the Republicans will control not only the White House, but also both houses of congress. Maybe it is time for Americans to open a discussion about their electoral system.

Anti-Trump protesters poured into streets as soon as they heard the results and we have no idea for how long they will remain there. We also do not know if they are protesting against the U.S.'s electoral system or just against Mr. Trump. If anti-Trump protests turn into some kind of Arab Spring, it will be quite hard for Mr. Trump to govern the U.S..

Maybe the usual rules and principles of democracy are no longer sufficient in our time. If some people start to believe that the only way to express their views is to shout in the streets, some other people will start saying that the "Egypt model" must be used to bring calm to the city streets.

If governments, in the U.S. or in Europe, decide that the only way to maintain order is to act in the manner the Egyptian authorities act against protesters, it will be hard to talk about social peace. The governing elite will then lose all contact with the masses.

That is the reason why the entire world is watching closely the happenings in the U.S. The new president will have to decide whether or not he will use violence to stop the demonstrations and the rest of the world will act accordingly.

Let's hope Mr. Trump's liberal businessman reflexes will prevail and he will not drag the world into excessive isolationism.
Last Update: Nov 16, 2016 1:00 am
RELATED TOPICS