Difficult days ahead amid Rouhani's success 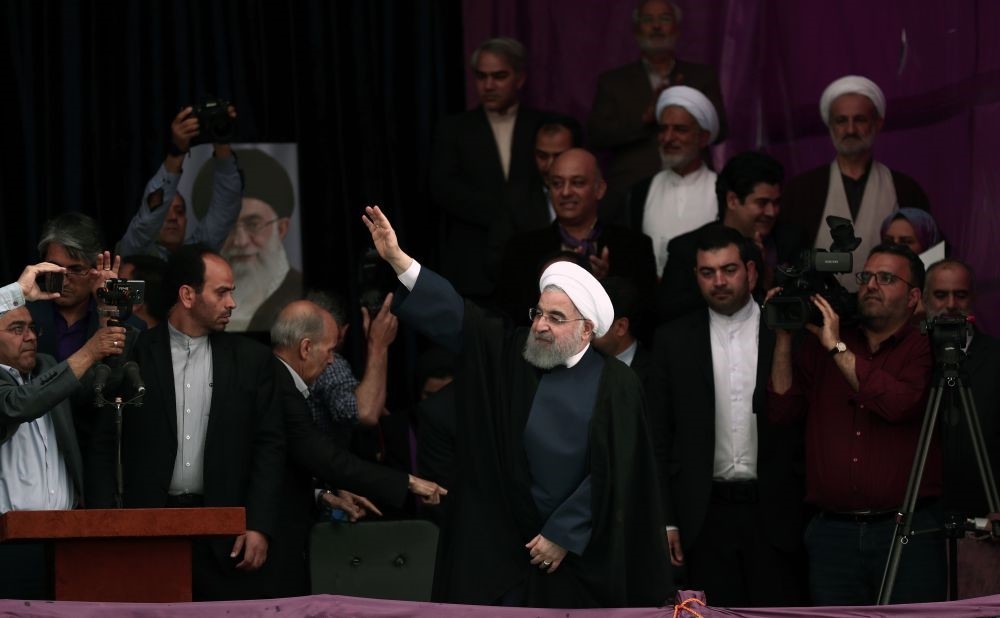 Hassan Rouhani greeting his supporters at a campaign rally ahead of the presidential elections at the Takhti stadium in the northeastern city of Mashhad, May 17.
by Beril Dedeoğlu
May 23, 2017 12:00 am

Rouhani seems to be having difficult times in determining Iran's alliances, which may trigger domestic problems as well

The Iranian people have voted in favor of the current President Hassan Rouhani in the country's presidential elections. The turnout was relatively high, around 70 percent, and Rouhani has obtained 57 percent of the votes, winning the election in the first round. His main rival was İbrahim Raisi, the candidate of the conservatives.

Elected in 2013 with 52 percent of the votes, Rouhani has thus increased his votes. That means many more people are now agreeing with his policy line. The international community is also satisfied with the election's result, as Rouhani has been presented as a "moderate." Therefore, Iran will continue to normalize its relations with the West, a central issue since the Islamic Revolution of 1979. The elections have also shown, once again, that Iran is a functioning state, despite the religious character of its republic. The central government is efficient and ordinary people are happy to be able to join in its administration, as the high turnout proves.

Rouhani is a reformist, but one mustn't forget he is a clergy as well, meaning he embraces whole-heartedly the values of the Islamic revolution. He is a moderate, though, which means he believes Iran's problems with the West, such as the nuclear issue, should be dealt with through negotiations, not escalation. He believes Iran's interests are better served when Tehran has good relations with the Western world. But to implement his "moderate" views, Rouhani has to find compromises with the real "number one" in the country, i.e. the Guide of the Revolution, Ali Khamanei. The fact that the latter has immediately congratulated Rouhani and said the elections have confirmed the rise of the Iranian nation, is, maybe, a good sign.

Rouhani insists that Iran must find a way to talk to the West and negotiate on its nuclear program. The resolution of the nuclear crisis is of crucial importance, as Iran needs the international sanctions to be lifted. We must not forget that, like in many countries, Iranian people vote according to economic conditions and expectations.

The conservative candidate Raisi has claimed, during the campaign, that he is the voice of the poor; but it seems poorer Iranians have trusted Rouhani, instead, as they believe he is the only one capable of terminating the sanctions. Besides, during his first term, Rouhani had enhanced the government's help toward less favored social segments.

Iran's economy was not in good shape when Rouhani came to power; even in 2015, the growth rate was -1.6 percent. In 2016, however, Iran's economy grew by 6.5 percent, oil production is rising, the banking system has been reformed and the inflation, which was 34.7 percent four years ago, is now 8.9 percent. So Rouhani is not just the "moderate" president, he is also the president of economic recovery.

This does not mean things will be easier for him during his second term. The Syrian civil war remains an important burden for Iran's economy and diplomacy. Iran's close relationship with Russia is well known, yet if Russia and the U.S. manage to beef up their cooperation in the Middle East, Iran may find the opportunity to reduce its dependence vis-a-vis Russia. The country may, for example, buy less weapons and enhance trade with other players. Nevertheless, if the relations between the U.S. and Russia get worse, then Iran will remain on the U.S.'s enemy list. In that case, sanctions will not be easily lifted.

Rouhani has been a successful president, at both the domestic and international levels, so far. He owes some part of this success to the former U.S. President Barack Obama's mild policy toward Iran. But now we have President Donald Trump in the U.S., and he does not seem to wants to win Iran. That is why, during his second term, Rouhani may have to settle with Iran's traditional alliance with Russia and China. Yet this alliance is, in the long run, reinforcing the conservatives and may provoke domestic problems.