What about a bit of coherence on weapons? 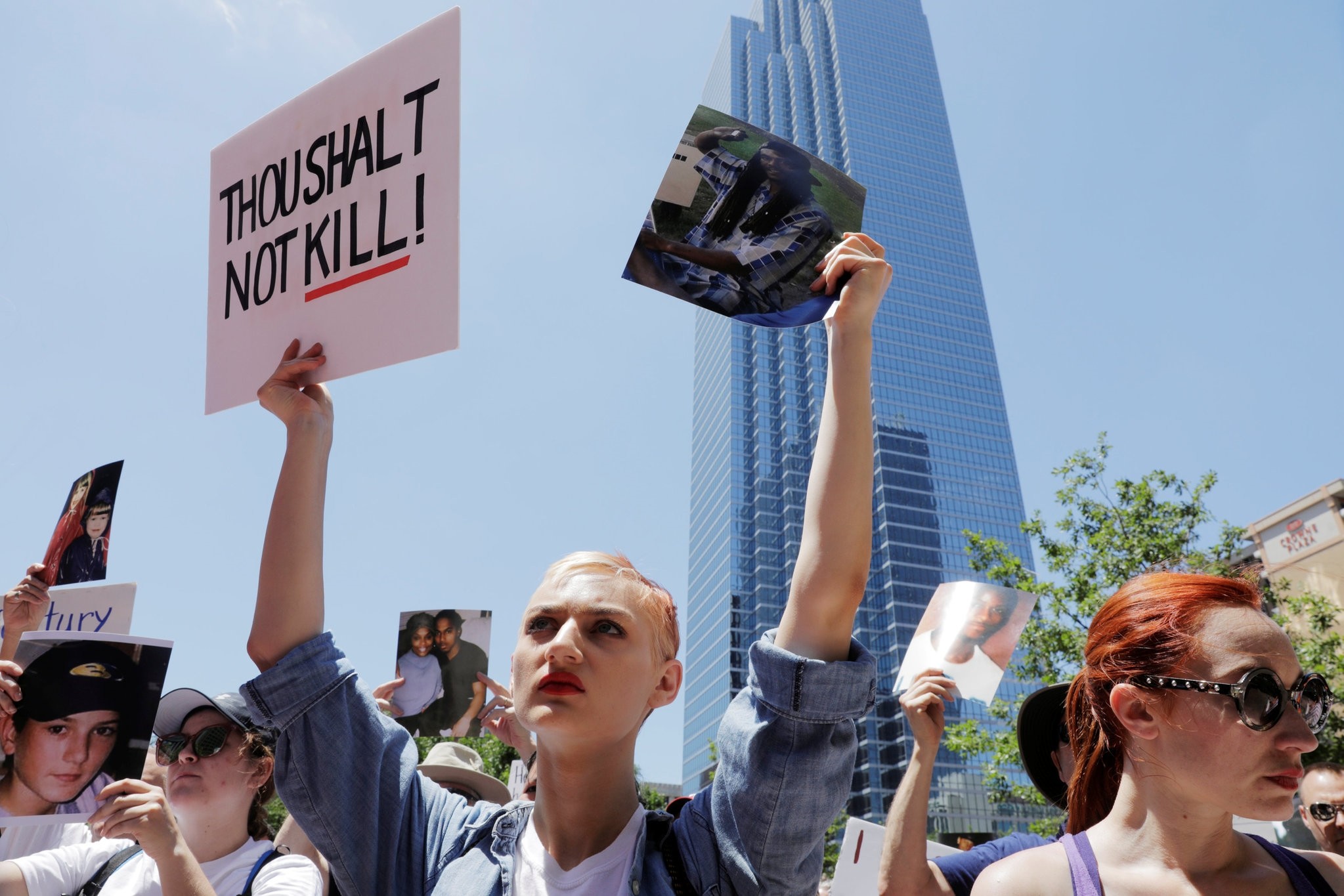 Gun control demonstrators protest outside of the annual National Rifle Association (NRA) convention in Dallas, Texas, U.S., May 5.
by Beril Dedeoğlu May 08, 2018 12:00 am

Giving arms to those who serve U.S. interests and restricting others is becoming Donald Trump's one and only rule over armaments

U.S. President Donald Trump addressed the annual meeting of the National Rifle Association (NRA), the leading organization of the powerful gun lobby in the U.S. His speech proved that he has already forgotten what happened in Parkland, an incident that claimed the lives of 17 people. We know that the debate in the U.S. about arms control is very controversial, and we also know what Trump's position is about it. He simply believes that there should be more weapons out in the streets to reduce gun violence. He even proposed distributing firearms to teachers to protect their classes, if needed, from possible shooters.

It is not easy to understand how more weapons will make cities safer; but it appears that Trump's idea of safety is to allow those who shoot faster to survive. He is only serving the gun lobby's interests by encouraging people to buy more efficient weapons if they want to survive in such an environment. Weapon manufacturers must be very satisfied with him because at this rate, every house in the U.S. will resemble an ammunition store very soon.

Trump not only spoke about the U.S. in his NRA speech; he also spoke about foreign countries, criticizing their gun control laws. The reason for this is his conviction that the best regulations on the matter are the American ones. He mentioned the knife attacks in London and reminded everyone about the U.K.'s tough gun laws, claiming that gun control does not mean anything. In a sense, he is right, because if somebody has decided to kill, he will do it one way or another. Even an ordinary kitchen knife would get the job done. However, there is no indication whatsoever that suggests allowing people to carry firearms would naturally reduce violent crimes, supposedly dissuading "bad people" from taking action.

For someone who believes armament is a good thing, it is coherent to sell weapons to Saudi Arabia or Gulf states. Nevertheless, at the same time, he does not want North Korea or Iran to get weapons. And now Congress will debate whether or not to temporarily halt weapons sales to Turkey.

So is he in favor of armament or not? Maybe he is only in favor of conventional weapons; but then, who should and should not get weapons of mass destruction, and why? We don't know the answers to those questions because nobody has asked him. It is clear that he has already decided who should get weapons and who should not. He absolutely does not want anti-American countries to have weapons to defend themselves, but pro-American ones should get all the weapons they need to defend the U.S.' interests.

One wonders what socio-economic group buys the most weapons or is responsible for violent crimes, robberies and so on in the U.S. Because Trump may one day say, exactly as he is doing in the international scene, that some Americans should get weapons and some should not. He may even propose a bill to limit gun sales to only those who can prove that their families have been living in the U.S. for at least seven generations.

History has proven that you cannot defeat your enemies by killing every one. If it were possible, it would be much easier to rule the world as the most powerful one would simply eliminate all the others.He should know the U.S. is not the only country that sells weapons, so those countries who are discriminated against will just buy their weapons from someone else. The difficult part is to create an international environment where countries will not feel the need to buy more and more weapons.