NATO depends on the US, or vice versa? 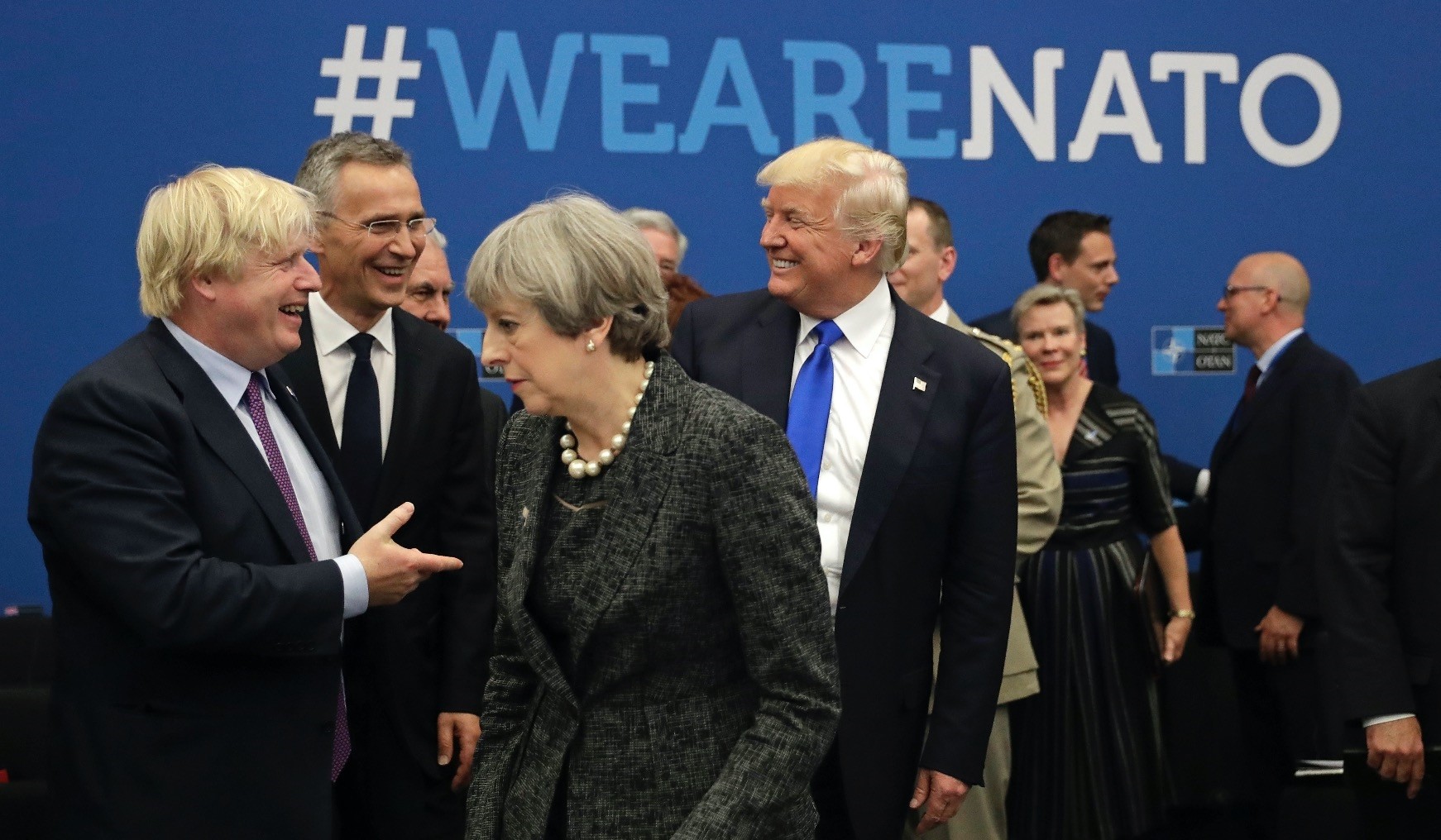 U.S. President Donald Trump jokes with then-Foreign Minister Boris Johnson of the U.K., as British Prime Minister Theresa May walks past during the annual summit at NATO headquarters, Brussels, 2017.
by Beril Dedeoğlu Sep 17, 2018 12:00 am

NATO has always helped the U.S. carry out its policies and campaigns throughout the world; therefore its possible end may cost the U.S. very dearly

The head of NATO, Jens Stoltenberg, gave a speech at the conservative Heritage Foundation in Washington last week, and tried to remind everyone how important NATO still is in the 21st century. An understandable theme if you address the American political elite.

The current U.S. administration needs to be reminded constantly that NATO is still a necessary strategic instrument. U.S. President Donald Trump doesn't seem to care about it; as he is on bad terms with almost all NATO member countries, and he keeps threatening a number of them of imposing sanctions for different reasons. He is also demanding more European military spending as a precondition to continue supporting NATO.

The U.S. president has even said that the U.S. could leave NATO at any time it wants. Should the U.S. decide to leave NATO, a number of European countries would, in fact, be very pleased. That's why the NATO Secretary General said that NATO is important, not only for Europe, but especially for the U.S.

Trump's position on NATO is creating many complications. First, the solidarity between NATO members is fading. Second, many countries don't believe the U.S. is the captain of NATO anymore. Besides, the impression that NATO loses its internal cohesion makes it difficult for the military organization to have coherent relations with non-NATO countries. This negative climate only serves Russia's and China's interests.

We don't know if the U.S. administration doesn't notice all this; but it is almost certain that it does not care about the long-term consequences of its actions. This process will cost the U.S. its global leadership position, and that is the Americans' problem. The allied countries will just start looking for other ways to improve their security and they will distance themselves from the U.S.

That's why Stoltenberg insisted on the importance of the alliance for the U.S. at every opportunity, as he did when he answered a question on Turkey. The question was about Turkey's decision to purchase the S-400 missile defense system from Russia, insinuating that Turkey is putting in danger NATO's overall security. Stoltenberg replied that every NATO member has the right to do whatever they think necessary to improve their national security and said that NATO-member Greece had also bought Russian missile systems to deploy in the Aegean islands. He also said that what is important for NATO is that different missile systems can work together.

What we understand from this answer is that Turkey will do its best to make these missiles compatible with NATO systems, and that the alliance has no problem with that. Another important part of the answer was that Stoltenberg emphasized the disagreement is mainly between the U.S. and Turkey, not between NATO and Turkey.

We know that the S-400 issue is only one item in the long list of disagreements between Turkey and the U.S. The list is long, because the strategic priorities of the two countries differ greatly. Turkey and the U.S. had many disagreements in the past, as well; but this time, the U.S.' strategic choices are being criticized by the majority of NATO members. In other words, President Trump is having a hard time finding another NATO ally to treat Turkey the way he does.

NATO is important for Turkey, for Canada, for Eastern European countries and even for the countries in Europe who prefer having an exclusively European defense organization. The point is, NATO will be of crucial importance for the U.S., too, in the near future. For Russia and China, the main threat remains the U.S., and not NATO's European members. If it doesn't change its ways, the U.S. will soon find out it is all alone against those great powers.