The Legacy of Gezi, One Year Later 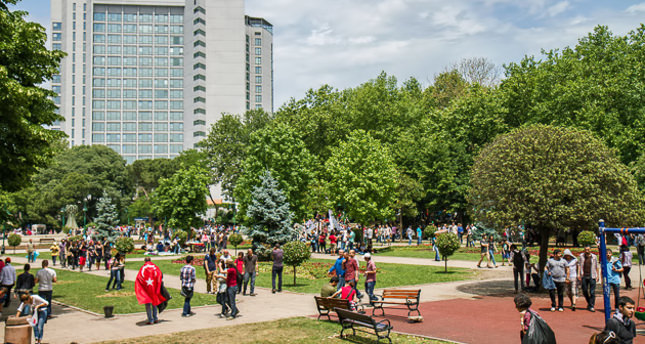 by Doğan Eşkinat May 26, 2014 12:00 am
On May 27, 2013, a small group of activists gathered at Gezi Park, a public park near Istanbul's Taksim Square, to protest an urban development project in the area.

Two days later, local security officers cracked down on the largely isolated protest on the construction site and proceeded to burn their personal belongings including tents and clothing items. Within the next few hours, the image of a police officer spraying a now-iconic lady in red with pepper gas circulated on social media. What followed was arguably one of the greatest challenges to the AK Party government's rule as violent protests erupted around the country and continued until the police dispersed protesters after two weeks of negotiations.

Countless accounts of last year's urban revolts have since hit the shelves, attesting to the multitude of agendas among participants. Depending on the meaning that different groups attributed for the revolts, the authors' interpretations all differ. A year later, however, we witness the emergence of two roadmaps for the future of Gezi.

Young members of the middle classes, whose participation in street demonstrations by itself marked a historic and newsworthy event, have gradually channeled their frustration into mainstream politics, as the main opposition Republican People's Party (CHP) took various steps to incorporate the movement into its platform and a number of smaller political parties on the ground, such as the Greens/Left Future (YSG), who joined forces with the newly-established Peoples' Democratic Party (HDP).

During the recent local elections, a sizeable group of secular-minded young professionals volunteered to monitor vote counts and document irregularities. Having witnessed the main opposition party's shortcomings, some volunteers organized #OccupyCHP, a grassroots movement that seeks to reform the Republicans.

The radicals within the movement, whose revolutionary agenda severely limited their access to the limelight, have grown increasingly bolder over the past year. In addition to last weekend's violent protests in Okmeydanı, Istanbul, far-left organizations like the DHKP-C, the Socialist Democracy Party (SDP), the Marxist-Leninist Liberation Party (MLKP) and the People's Front (Halk Cephesi) led the charge against the police during demonstrations in Tuzluçayır, Ankara as well as Armutlu, Istanbul over the past year. Photographs from the clashes on Friday showing masked men with automatic rifles targeting the security forces, which AFP and other news agencies featured over the past days, attested to the increasing radicalization of these groups.

A young man in his early 20s, whom I interviewed at the People's Front tent at Gezi Park during last year's protests, stated that he had neither voted nor intended to vote in popular elections. Disenchanted with parliamentary politics, which he described as a spectacle, the self-proclaimed Marxist-Leninist cleverly argued that, had elections promised any real change, the state would surely have banned them already.

"The fascist government authority will not go away since the imperialist powers are happy with the current state of affairs," he added.

With the anniversary of the Gezi Park protests just days away, one of the most interesting opposition movements in the country's history finds itself at a crossroads. On one hand, the highly-motivated young people with little or no history of political activism seek to transform the country's politics. On the other, a small group of armed militias attempt to hijack the anti-government sentiments with a revolutionary war down the pipeline. How this affair will play out remains to be seen, but there is no doubt that we find ourselves faced with a historic decision.