The power of ‘New' 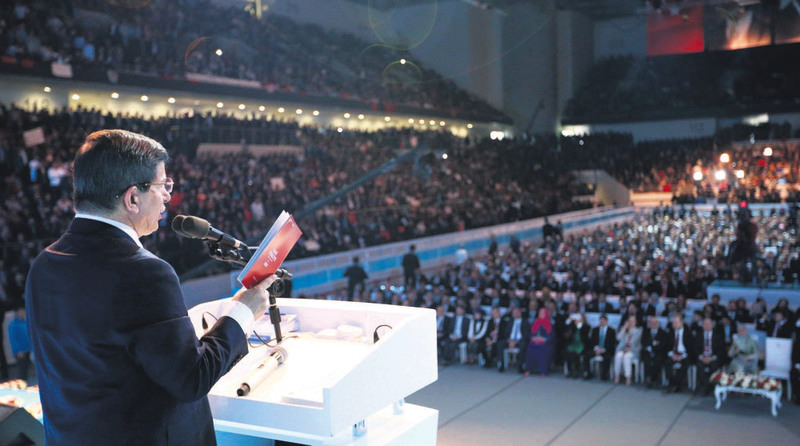 Ahead of the June 7 elections, the AK Party introduced a 350-page vision document reminding voters that the country, having broken the chains of guardianship, needs to prepare for ‘the second half'

The Justice and Development Party's (AK Party) 12-year rule has been one of the most transformative epochs in Turkey's political history. During this period, the movement derived its power from a new brand of self-confidence linked to the country's sense of civilization. The high level of self-confidence represents a vision for a political leadership aiming to play an active role in world politics and coming to terms with the nation's history. President Recep Tayyip Erdoğan's ability to communicate his efforts to the people, similarly, relates to his commitment to come up with new goals on a regular basis. As such, the ability to constantly raise the bar and putting ideas into practice translates into strong leadership - which is why the AK Party remains the primary proponent of change despite the opposition's fierce criticism and the toll that political power takes on parties.

Ahead of the June 7 elections, the AK Party introduced a 350-page vision document reminding voters that the country, having broken the chains of guardianship, needs to prepare for "the second half." The document reflects the government's efforts to consolidate Turkish democracy with reference to human dignity and a new social contract and emphasized the need to draft a new, civilian and participatory constitution to create a presidential regime: "By adopting a new constitution, we can transition into a new political system wherein elections promote stability, the legislative and executive branches remain active within their own mandate, checks and balances are in place, diverse social groups enjoy access to political representation, local government attain greater influence and all forms of guardianship disappear."

At the same time, the AK Party published "The New Turkey Contract 2023," which Prime Minister Ahmet Davutoğlu himself authored. The document clearly seeks to link the new Turkey agenda to the idea of human dignity and the government's civilization discourse. (As a matter of fact, the text refers to "human dignity" 24 times.) While the ruling party pledges to transform Turkey into a historic actor and pioneer, their ultimate goal is to "promote the global standard of pluralistic, egalitarian and participatory democracy in all aspects of life." Surely enough, anyone could get behind the goal of making the country "one of the 21st century's rising powers." After all, this is but an updated version of the Republican maxim aiming for equal footing with modern civilization. The point is that we cannot afford to lose sight of the significance of Turkey's ongoing transformation due to party politics and the opposition's anti-AK Party noise.

Here's a great example of historical perspective: Gökhan Çetinsaya, a senior advisor to the prime minister, recently spoke at an event organized by Insight Turkey, a quarterly journal, in Belgrade and pointed out that Turkey was going through a period of normalization. The new Turkey agenda, without a doubt, represents the country's strongest response to 200 years of challenges. At the same time, periods of transformation are typically dynamic and painful. Today, the AK Party will have to rise to a critical challenge in order to put new Turkey to work. The time has come to settle the domestic power struggle, a by-product of transformation, and create a stable political system. Hence the desperately-needed transition into presidentialism.
Last Update: Apr 20, 2015 1:09 am
RELATED TOPICS