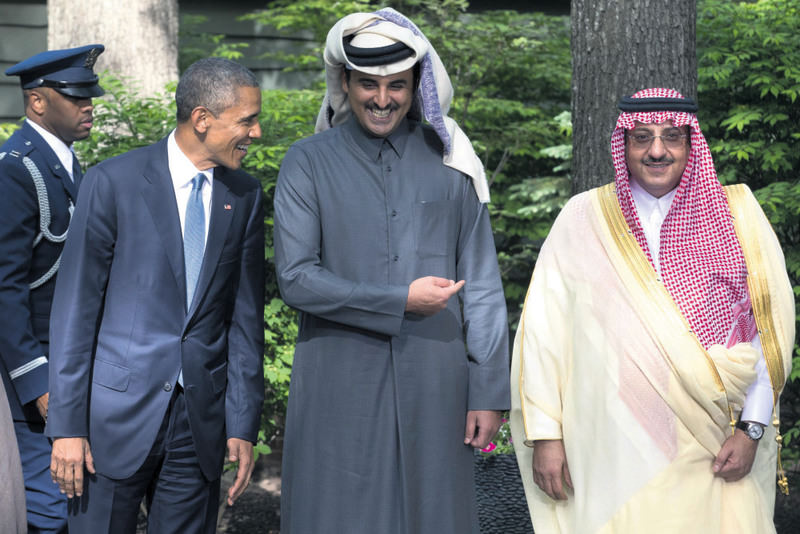 So far the Obama administration's Middle East policy ignited the polarization between Gulf nations and Iran further. Thus, it remains a big challenge for the U.S. to end regional turmoil through diplomatic means anytime soon

A number of Gulf nations, including Saudi Arabia, are deeply concerned about the Obama administration's recent rapprochement with Tehran. This new approach, dubbed the Obama doctrine, represents an effort to pull Iran back into the international system through diplomatic channels while keeping military options on the table. Barack Obama, surely enough, must know that the Iran nuclear deal has disappointed Israel, an American ally, and various Gulf nations. To address Israel's concerns, members of the Obama administration said that there is no better way to keep Iran's nuclear program under control than to regularly monitor its progress. IAEA experts, the White House maintain, will be able to inspect all suspected nuclear sites when the deal goes through.

On Thursday, the administration hosted representatives from Gulf nations at Camp David. The summit, however, did not start as well as Washington had hoped. King Salman, the recently annointed leader of Saudi Arabia, instructed crown prince Naif to attend the talks. Furthermore, the summit attracted heads of state from Kuwait and Qatar only. In an interview with Thomas Friedman ahead of last week's event, President Obama called on Gulf nations to implement domestic reforms, while suggesting that domestic tensions, not Iranian expansionism, represented the greatest threat to their national security. Some things, of course, are easier said than done. The Gulf governments' eagerness to crush the Muslim Brotherhood rendered them unable to implement reforms while leaving their citizens no option but to join radical organizations such as al-Qaida and the Islamic State of Iraq and al-Sham (ISIS). The United States, meanwhile, did not make an effort to prevent the downfall of pro-democracy Islamist groups. At this point, any effort by the Gulf nations to address the grievances of their Shiite citizens runs the risk of helping Iran expand its soft power - which is exactly why Mr. Obama's call for reform falls on deaf ears.

Ahead of the Camp David summit, Mr. Obama told Asharq Al-Awsat, a London-based newspaper, that his country was prepared to use all elements of its power to safeguard the Gulf nations from Tehran's "reckless behavior." Washington, the president said, was committed to strengthening their defense (read: additional weapons sales). Keeping in mind that the United States has grown less interested in Middle East oil and more exhausted from regional conflicts, Gulf nations might conclude that the U.S. security umbrella has become unsustainable. One thing is clear: The Obama administration's Middle East policy promotes further polarization between Gulf nations and Iran. It remains unlikely for Mr. Obama to deliver on his promise to end regional turmoil through diplomatic means anytime soon. If anything, it will be extremely difficult to stop the expansionism of Iran, which uses a special blend of ideology and pragmatism to craft an integrated regional policy. There is no doubt that the country will maintain its influence over Lebanon, Syria, Iraq and Yemen through the proxy of Shiite militias, whose activities are legitimized by the problem of Sunni radicalism which Washington delegated to local actors. At the same time, the hard power instruments at the Iranian government's disposal will help boost the country's soft power.

The Obama administration's Middle East policy, which refuses to get involved in regional affairs unless absolutely necessary and seeks to handle regional problems through the proxy of local players, leads the region to an uncertain future. It would appear that proxy wars and the cycle of violence, which is fueled by Sunni and Shiite radicals, will continue to haunt the Middle East in the foreseeable future. Provided that the ongoing conflict will not spill over to other parts of the world, the United States ostensibly has no intention to care.

Burhanettin Duran is General Coordinator of SETA Foundation and a professor at Ibn Haldun University. He is also a member of Turkish Presidency Security and Foreign Policies Council.
Last Update: May 18, 2015 3:12 am
RELATED TOPICS