Erdoğan's offer to the United States 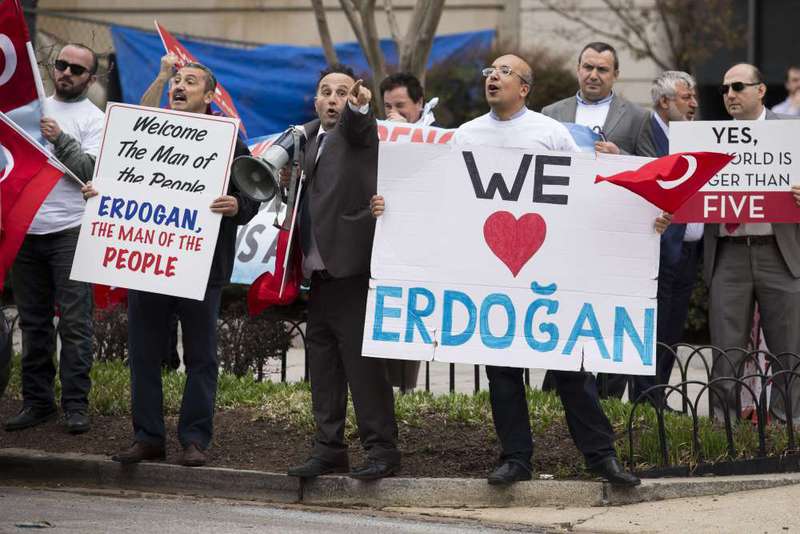 Supporters of President Erdou011fan rally outside the Brookings Institution in Washington. (AFP Photo)
by Burhanettin Duran Apr 02, 2016 12:00 am

Erdoğan adopted a reconciliatory tone in Washington to convey the message that he was interested in addressing the pressing problems in Turkish-U.S. relations

President Recep Tayyip Erdoğan has been in Washington since Tuesday to attend the fourth Nuclear Security Summit, a meeting of world leaders aimed at preventing nuclear terrorism around the globe. To address this challenge, the international community must facilitate efficient intelligence sharing, among other things. Keeping in mind that the world is not even on the same page on counterterrorism, more time is needed to make progress regarding nuclear threats. Although the summit was a key item on President Erdoğan's agenda, his Washington trip was primarily geared toward reconfiguring Turkish-U.S. relations on the basis of shared values and mutual interest.

At a time when bilateral ties are unusually strained, Turkey's staunchest opponents have been targeting Erdoğan. Multiple U.S. media outlets, for instance, called on U.S. President Barack Obama's administration to send a strong message to the Turkish leadership about democratization. On Wednesday, Foreign Policy's John Hudson claimed that Erdoğan had used "a closed-door meeting [with academics and former government officials] to blast the administration" – referring to his criticism of Obama's reliance on the Democratic Union Party (PYD), the outlawed PKK's Syrian affiliate, to fight DAESH. Meanwhile, Amnesty International called on their supporters to stage a protest outside the Brookings Institution where Erdoğan delivered a speech on Thursday, citing what they called human rights violations in Turkey.

Erdoğan, however, adopted a reconciliatory tone in Washington to convey the message that he was interested in addressing the pressing problems in Turkish-U.S. relations. He told representatives of Washington think tanks that he wanted to believe that the U.S. understood Turkey's concerns and stood with his country to warn that "there is no alternative to Turkish-American partnership to address pressing issues." At a working dinner with the business community, he recalled that Turkey and the United States once considered what they had "a strategic partnership," or in Obama's words, "a model partnership."

Of course, there is little doubt that the days of this model partnership are long gone. With the Obama administration packing its bags and a presidential election around the corner, U.S. officials have been largely unable to focus on long-term challenges. Especially in the Middle East, however, Turkey and the United States must start working together on the basis of shared values and mutual interests, as Erdoğan repeatedly said in Washington.

Having refused to interfere in the Syrian civil war, the Obama administration made it necessary for regional powers to become more involved in local and regional conflicts. His belief that it was regional players' job to fix the pressing problems has been extremely damaging to Turkey by making the country vulnerable to terror attacks and a humanitarian crisis. The White House furthermore turned its back on years of partnership and cooperation with Turkey by openly supporting the PYD's People's Protection Units (YPG) militants in northern Syria.

While Turkey and the United States have certain problems with each other's policies, both countries must pledge to work together again. For a new period of cooperation to begin, the next president will have to revisit Obama's Middle East policy, which lacks self-confidence and reflects a deep distrust in U.S. allies in the region.