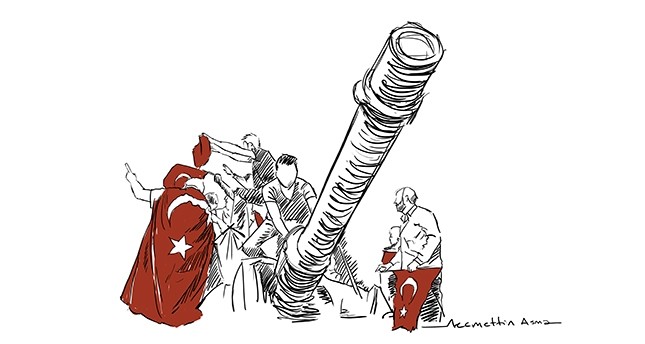 Drawing by Necmettin Asma - twitter.com/necmettinasma
by Burhanettin Duran Aug 08, 2016 12:00 am

A politician who cannot read the trends of politics is destined to be lost in the pages of history before long.

Having repelled the coup attempt, the Turkish people laid the ground for a new political reconciliation as part of "democracy watches."

A civilian wave mobilized to protect Turkey's welfare, security and integrity has been formed and a state of mind that goes beyond the daily party politics has emerged, laying the ground of an all-encompassing mindset, which regards the notions of land, state and democracy within the framework of common national interests.

The last chain of this phenomenon in public squares is the Democracy and Martyrs Rally held in Istanbul's Yenikapı district on Sunday.

Upon the invitation of President Recep Tayyip Erdoğan, the chairmen of the Justice and Development Party (AK Party), Nationalist Movement Party (MHP) and Republican People's Party (CHP), made speeches there.

The best answer given to the West's Turkey dissidence is the unity of political parties against the coup and the organization of a common rally to mark it.

Also, it is pleasing to see that CHP Chairman Kemal Kılıçdaroğlu rid himself of his concerns that the solidarity against the coup attempt would favor Erdoğan.

The CHP first declared that it would not participate in the rally on the grounds that it was an attempt to fix Erdoğan's prestige, which declined on the international scale, through opposition leaders.

This doubt is reminiscent of the Western media's discourse concerning July 15, which can be summarized as saying that the coup attempt would favor Erdoğan.

Therefore, upon this remark, I worried that the CHP would have some inclinations detached from the new trends in Turkish society.

Studies and surveys conducted on the people who poured into the squares to defend democracy show that a new political perception map that also encompasses the CHP electorate has been formed.

Two individual studies conducted by the Foundation for Political, Economic and Social Research (SETA) and Ankara Social Sciences University found that people with different ideological stances unite on the common ground of "patriotism."

The participants from the CHP base, particularly women, are gradually leaving their deep-rooted criticism of Erdoğan and adopting a supportive approach to the president to a certain extent for the sake of the country's future.

Around 95 percent of the people participating in the democracy watches said they had trust in Erdoğan.

Undoubtedly, this is because Erdoğan displayed successful leadership and shouldered the critical role of calling the people out to the streets on the night of the coup attempt.

I could easily say that the political codes have changed to such an extent after July 15 that Erdoğan dissidence has turned into one of the dimensions that could undermine political parties.

The notions of stability, safety and the future are increasingly identified with Erdoğan's leadership.

If the opposition wants to use the "Erdoğan phenomenon" as a political maneuver, it has to produce a new language and a new political style.

And this new language needs to build its criticism through positive and protectionist themes.

The wave of efforts to marginalize Erdoğan is now over and coded in the country as one of the hallmarks of foreign and marginal Westernism.

As a matter of fact, the CHP has a chance to increase its influence in this atmosphere of reconciliation.

CHP politicians can make serious contributions to lessening the Turkey dissidence the Western media engages in through criticism of Erdoğan.

The arguments used by the opposition against the AK Party now correspond to all of Turkey.

As a country, we came to suffocate ourselves with this stale air, and even July 15 could not break the international campaign.

It became evident that Turkey's Western allies prioritize their own tangible interests rather than democracy and secularism in Turkey.

In such an atmosphere, objecting to the approach that represents democracy watches as ferocious masses of the Islamist dictator can create new political possibilities for the CHP.

The concern of being a consistent opposition turns into the problem of remaining silent to the course of events against Turkey.

The Yenikapı spirit works to end this dilemma.

Otherwise, the new trend in politics could get out of hand. And missing reconciliation moments of society would be the biggest mistake a politician could make.